The fight against the Mountain Valley Pipeline intensifies 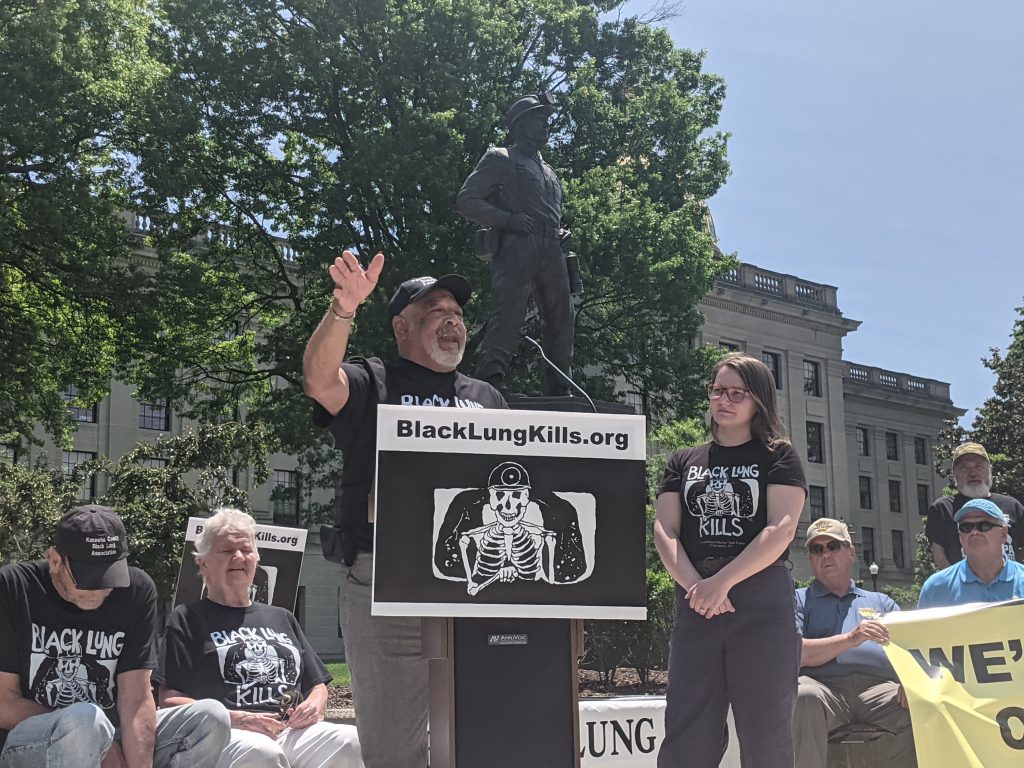 Gary Hairston, president of the National Black Lung Association, speaks at a press conference in front of the West Virginia Capitol last May urging Sen. Joe Manchin to take action to shore up the Black Lung Disability Trust Fund. Photo by Willie Dodson

On July 20, I wrote a blog post about the failure of Senate Democrats to move forward on passing any of President Joe Biden’s Build Back Better agenda. Nearly nine months after the House passed the Build Back Better Act, Sen. Joe Manchin had walked away from a trimmed-down version of the House’s original legislation for the second time. Efforts to advance any measures related to climate change before the window closed for Senate Democrats to pass legislation through the budget reconciliation process, which only requires a simple majority vote, seemed dead.

Then, on the night of July 27 — as heavy rains battered my corner of Southwest Virginia and unleashed record, climate-change-fueled flooding on Wise and Dickenson counties and our Kentucky neighbors — Manchin and Senate Majority Leader Chuck Schumer announced they had come to an agreement on a new clean energy and health care reconciliation bill, the Inflation Reduction Act. 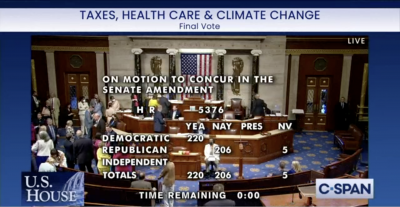 The near final vote on the Inflation Reduction Act. (One more Republican would vote no before the final tally)

The new bill contains many policies we and our partners had championed since the early days of the Biden administration, when it became apparent that budget reconciliation would offer a route for the Senate to act on matters like making solar more accessible and shoring up benefits for miners with black lung. Now, the Inflation Reduction Act, the third major iteration of that bill, has passed the U.S. House and was signed by Biden this afternoon.

While this bill contains provisions we’ve worked very hard to secure that will make huge strides towards reducing climate emissions, help Appalachian communities working to transition to more sustainable economies, and give coal miners with black lung much-needed and deserved peace of mind, this version of the bill also contains harmful concessions to the fossil fuel industry. Also, Democratic leaders made a bad deal with Manchin to bring to a vote on a fossil fuel industry wish list that, if enacted, would radically weaken permitting and ram through approval of the Mountain Valley Pipeline. Defeating this attempt to roll back environmental protections and grease the skids for the pipeline is at the top of Appalachian Voices’ priority list.

This mix of good and bad makes for confusion, concern and a perfectly understandable feeling that the communities battling pipelines, offshore drilling and other fossil fuel infrastructure for years were betrayed by a political bargain. We thought it might be helpful to sort through all this — the good, the bad and the ugly — and explain why we support the Inflation Reduction Act and why we are wholly committed to fighting the industry’s permitting wish list and any forced congressional approval of MVP.

“The Inflation Reduction Act is a major achievement in the effort to reduce our nation’s greenhouse gas emissions and other harmful pollutants,” said Appalachian Voices Executive Director Tom Cormons when the bill passed the Senate. “The bill includes big victories for Appalachian communities such as clean energy development and manufacturing tax credits directed at communities transitioning away from fossil fuel economies, incentives for rural electric cooperatives switching to clean energy, and a permanent extension of the black lung excise tax to help shore up benefits and healthcare for coal miners with black lung.” 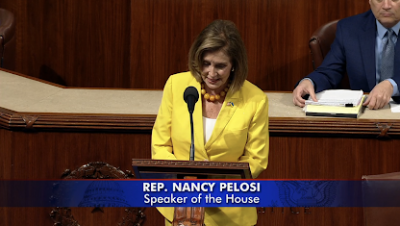 Speaker of the House Nancy Pelosi argues in favor of the bill prior to its passage.

Miners with black lung have been fighting for more than three years to get a 10-year extension of the black lung excise tax at its full level: $0.55 per ton of surface-mined coal and $1.10 per ton of coal mined underground. The tax was cut in half in 2018, but restored in 2019 and 2020 with one-year bills. In 2021, no extension was passed, and the Black Lung Disability Trust Fund lost more than $2.8 million every week as a result.

The Inflation Reduction Act permanently restores the tax at the higher levels, helping to ensure that the trust fund will have the money to pay for health insurance and a small living stipend for miners with black lung and their families. This ends a lot of unnecessary uncertainty for these families.

The bill’s climate, energy and environmental investments will do more than lower carbon emissions and improve public health — they will also generate lots and lots of clean energy jobs. An analysis commissioned by the Blue-Green Alliance estimates these investments will generate around 9 million jobs over the next decade. Another analysis by the Princeton-led REPEAT Project warns that it will be difficult to train and hire the number of workers needed for the many different clean energy projects the bill will fund. What an opportunity that represents!

We are especially excited about the opportunity presented by the incentives designed to create new clean energy manufacturing and installation jobs in low-income communities and communities grappling with the decline of the coal industry. These new incentives will give a boost to the work our New Economy Program and the Solar Workgroup of Southwest Virginia has been doing in recent years to build a renewable energy economy in Southwest Virginia and the broader Central Appalachian region. The Solar Energy Industries Association has a detailed description of the bill’s solar and energy storage provisions.

The package also includes more than $10 billion to support rural electric cooperatives and the communities they serve as they transition to renewable energy and make energy efficiency improvements, which could also lower electricity costs. Appalachian Voices and our partners in the Rural Power Coalition worked hard over the last 18 months to secure this historic investment for rural energy transition in the Inflation Reduction Act. These provisions will help communities that were among the last to gain access to electricity but have long had to deal with the burden of polluting energy infrastructure, extraction and energy waste.

What we oppose in the Inflation Reduction Act

Several provisions in the bill are harmful concessions to the fossil fuel industry and threaten communities that have already borne disproportionate impact from fossil fuel infrastructure. For example, the bill would require the federal government to hold new oil and gas lease auctions on federal lands and in the Gulf of Mexico in order to be able to auction land for wind and solar farms.

The bill also includes a tax credit for hydrogen production that is designed in a problematic way. While hydrogen can be produced using renewable energy, the most common form of production today involves separating hydrogen from hydrocarbons like fracked gas — which results in CO2 emissions and incentivizes more fracking. The tax credit is higher for cleaner production methods, but it would still subsidize dirty hydrogen production — and the industry would inevitably attempt to construct any new production facilities in disadvantaged communities.

Incentives included for biogas and carbon capture are also problematic because they would encourage the build-out of more carbon-emitting infrastructure, prolonging our reliance on dirty energy sources.

Part of the deal Democratic leaders made with Manchin is the reported agreement to advance separate “permitting reform” legislation following passage of the Inflation Reduction Act that would contain a fossil fuel industry wish list of radical changes to the nation’s permitting system and attempt to force approval of the Mountain Valley Pipeline.

This “deal” is absolutely unacceptable, and we are fighting it every step of the way.

As Jessica Sims, our Virginia field coordinator, said when this horrible agreement first came to light, “Residents of every Appalachian and environmental justice community deserve to benefit from ambitious and transformative climate policy, and we firmly oppose any approach by Congress that sacrifices frontline communities as part of a political bargain.”

Let’s start with the idea of Congress forcing approval of the Mountain Valley Pipeline — even though federal agencies authorizing the pipeline have repeatedly been found to have violated the law. Rather than ensure the pipeline is built in an environmentally sound way that protects endangered species and public land, Manchin wants Congress to force agencies to rubber-stamp approvals.

That’s wrong, it’s dangerous, and it is a slap in the faces of all the people and organizations who have been fighting this pipeline for years. Many motivations spur those in the fight. Some focus on the plight of endangered species and the devastating impact of the pipeline on sensitive waterways and habitats. Some want to protect their private property from the pipeline. Some worry about the dangers associated with pipelines and their construction — explosions, pollution from compressor stations, erosion, run-off and more. Others worry about the carbon emissions and building out expensive infrastructure that will lock in the use of fracked gas for decades, and add to the growing climate crisis. All recognize that the unnecessary and destructive Mountain Valley Pipeline must be stopped.

All of these concerns deserve fair hearings and resolution — not to be swept under the rug by a backroom deal in Congress.

Sen. Manchin’s fossil fuel wish listwould radically weaken safeguards for our communities and the environment, and force completion of the Mountain Valley Pipeline. Tell your representatives in Congress that this is unacceptable!

While some recognize the need for actual permitting reform that could speed critical development of renewable energy infrastructure in an environmentally responsible manner, this wish list does not accomplish that and would only trample over communities, hamstring the ability of multiple federal agencies to uphold fundamental environmental regulations that have been in place since the 1970s and encourage dirty energy projects that would reverse gains in reining in carbon emissions.

The Inflation Reduction Act presents an enormous opportunity for Appalachian communities working to play a significant role in the new clean energy economy. But it also creates new threats to environmental justice communities. Appalachian Voices will continue our work to make sure our communities benefit from the new clean energy investments while protecting them from the harmful impacts of the fossil fuel industry. Our work is far from done — we hope you’ll join us.