[UPDATE: On Friday, April 23, the White House released an interagency report mapping out the Biden administration’s response to economic decline in coal-impacted communities across the country — including the mining region of Appalachia and out west, as well as communities with coal-fired power plants. The Interagency Working Group recognizes that local community members must drive the direction of local economic development and is setting up a listening tour so that residents can share ideas and recommendations. Read our press release here.] 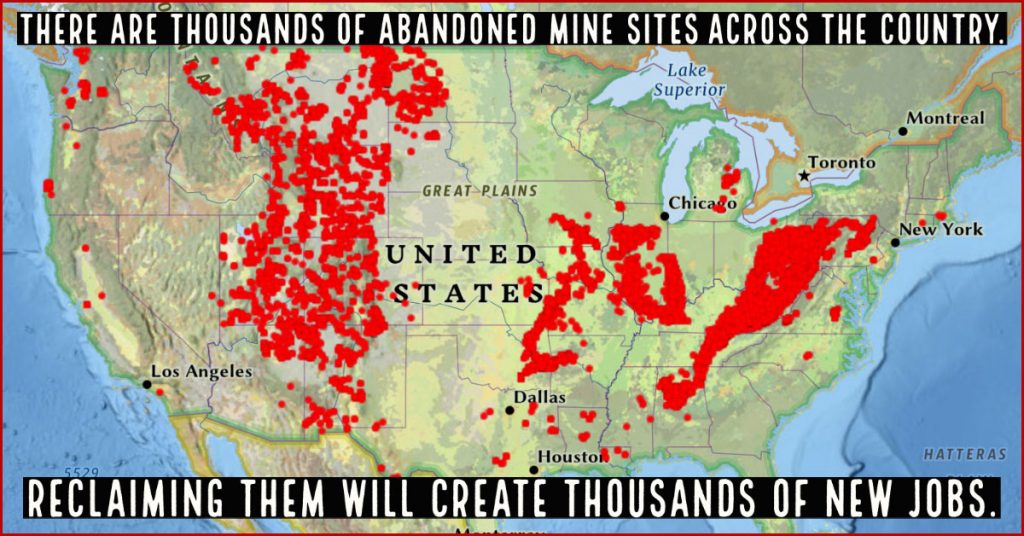 As an organization that cares deeply about the people, land and water of our region, we find much to applaud in the American Jobs Plan unveiled by the White House yesterday.

The plan aims to create jobs while rebuilding crumbling infrastructure, expanding other foundational services like a cleaner electric grid and rural broadband, and tackling climate change. This plan also includes $16 billion for cleaning up abandoned coal and hardrock mine lands and orphaned oil and gas wells, as well $5 billion for brownfields and Superfund sites.

To shape an economy that works for everyone, communities on the frontlines of pollution, communities most impacted by our energy transition, and communities that have been historically left behind must be priorities. The American Jobs Plan includes a pledge to bring 40 percent of the benefits of climate and clean infrastructure investments to disadvantaged communities — the Justice40 Initiative — a critically important commitment for the country to make. Renewable energy is better for the environment and public health but, like all technology, it is not inherently fair or just. Creating an equitable energy system requires purposeful action, and this Justice40 Initiative is an essential first step.

We’re excited to see major investments to clean up abandoned coal mine lands in the American Jobs Plan. It’s a vitally important measure to help ensure coal communities are a part of the economic recovery. Funding to remediate abandoned mines must match the enormous scale of the problem in order to protect communities nearby and downstream.

Estimates show that it will cost up to $32.43 billion to reclaim the remaining abandoned coal mines nationwide. The investment included in the American Jobs Plan is essential. We need to ensure that the legislation will include reauthorization of the Abandoned Mine Lands (AML) Fund as well as an additional $10 billion to ensure the fund is sufficient as revenue from the AML fee declines along with coal production, a plan proposed in Senator Booker’s Environmental Justice Legacy Pollution Cleanup Act of 2020. Cleaning up abandoned mines will create abundant and good-paying jobs. And to prioritize the revitalization of local economies and continue to generate job creation, the American Jobs Plan must also incorporate the RECLAIM Act, which will fund economic development efforts paired with AML reclamation.

Beyond AML investments, it’s imperative that the White House and Congress further their commitment to coal communities and fulfill the nation’s promises to miners suffering from black lung disease by fixing the Black Lung Disability Trust Fund and ensuring that they and their dependents are able to access the benefits and healthcare to which they are entitled.

As the details are developed, Congress should build on the momentum in this plan and ensure that the federal government passes a robust infrastructure package that puts Appalachia and the rest of our country on the fast track to a resilient, sustainable future and supports good-paying jobs and a safe and healthy environment.

Among many other proposals, the American Jobs Plan pledges investments in:

What we and our partners are saying:

Robin Blakeman, Ohio Valley Environmental Coalition (OVEC), Organizer
“COVID-19 and the recent dramatic downturn of the coal economy have made decades of economic decline and occupational and community health hazards even more challenging and daunting here in West Virginia. Major investments in our infrastructure can be the place we start building an economic recovery and long term resiliency. The President’s plan to invest in cleaning up and reclaiming abandoned mine lands is a welcome step forward that responds to the years of advocacy from our communities and can be the foundation for the equitable, inclusive economy we can build here at home.”

Veronica Coptis, Center for Coalfield Justice, Executive Director
“President Biden’s infrastructure plan is a huge first step toward investing in our communities. While the scope and standards of the plan provide a very solid foundation, much more is needed: We need Congress to go even bigger. As it is, the plan will address roughly 1/3 of what is needed nationally to equitably rebuild our country.
Now President Biden must express support for the National Economic Transition Platform, which will ensure direct investment in coalfield communities. The NET platform is based on community-driven solutions from those of us who know what we need because we live here.”

Heidi Binko, Just Transition Fund, Executive Director
“For far too long, the rural and tribal communities that powered America have been left out and left behind of the economic prosperity the rest of the country has enjoyed. The American Jobs Plan is an ambitious first step to tackle this challenge. Building from solutions developed by local leaders and calling for key infrastructure investments like broadband that have far-reaching economic and equity benefits, the Plan proves the Biden Administration is listening to the people and workers most affected by these challenges. If done right, the plan can spur inclusive economic growth to create more opportunity in rural America, address inequities, and give our country a fighting chance to tackle climate change.”

Tom Cormons, Appalachian Voices Executive Director
“Appalachian communities have been fighting for years to see the kinds of investments that the American Jobs Plan includes. Prioritizing abandoned mine land reclamation will not only address the environmental hazards left behind by the coal industry, but also employ thousands of people across the region. This investment paired with clean energy incentives, broadband expansion, and worker transition programs will provide a much-needed boost to coal communities across America that have given the nation so much.”

Brandon Dennison, Coalfield Development, CEO
“Rural entrepreneurs and citizen-leaders have been cobbling together incredibly innovative solutions to pressing problems for generations. We’ve been doing so with very limited resources. Now, in the American Jobs Plan, we finally have a chance to get the level of investments needed to not just survive, but to actually build the new, more fair, more just economy that’s desperately needed. Local people have solutions to pressing problems. We just need the resources to scale these solutions. The American Jobs Plan is an historic opportunity to improve the quality-of-life and well-being for all Americans, including the far too many rural Americans who have been left out of far too many opportunities. The positive impacts of this plan will reverberate for generations.”

Anthony Flaccavento, SCALE,Inc., President
“As a farmer who has worked with hundreds of other producers to make a path forward after tobacco farming collapsed, the American Jobs Plan is a breath of fresh air. We’ve been singing the same tune for many years now: Let us lead, invest in home-grown solutions, and stick with us long enough to build real wealth and lasting capacity. I reckon that good things come to those who wait, because it looks to me like the Biden plan just might make that possible!”

Peter Hille, Mountain Association, President
“President Biden’s infrastructure plan is a significant start to accelerate a just transition for people in the coalfields. Developing an economy that works for everyone in coal communities must be a priority for every policymaker, and the Mountain Association and many of our partners worked hard on the National Economic Transition platform to provide a policy road map to show them the way. We’re excited to see many of the priorities of that platform reflected in the President’s plan, including investments in community-driven solutions that can develop each community’s unique potential assets into job-creating engines, from tourism to agriculture to clean energy. Now, we’re eager to ensure these proposals become a reality, guided by the perspectives and expertise of the communities they could benefit.”

Nicole Horseherder, Tó Nizhóní Ání, Executive Director
“This plan is a step in the right direction. The more time that the Biden Administration commits to supporting a just transition, the more problems that can be resolved for communities facing pollution and economic collapse. This Administration has the opportunity to effectively bring back communities that have lived in the shadows of the coal industry, shouldering the costs and the devastation while other communities benefited and grew.”

Natalie Roper, Generation West Virginia, Executive Director
“Everyone deserves to feel like they have the opportunity to succeed and pursue the kind of careers they choose. But too many people feel like they have to leave West Virginia to do that, feeling stuck or pushed out with limited opportunities and limited choices. At Generation West Virginia, we have seen that a different future is possible when young people have access to a diversity of career pathways and support. With this exciting federal investment and commitment, successful local solutions can be scaled to continue to build a future where people aren’t choosing between leaving home and the economic opportunity they deserve.”

Rebecca Shelton, Appalachian Citizens’ Law Center, Director of Policy and Organizing
“Investments in reclaiming and restoring abandoned mine lands creates jobs, cleans up polluted water, and makes our communities safer. That’s why advocates from coal communities have been fighting to pass the RECLAIM Act and legislation to reauthorize the Abandoned Mine Lands fund for years. We’re happy to see that President Biden’s infrastructure plan shares some of the same goals as these important bills by investing in reclamation to help spur an economic recovery in Appalachia. This is important momentum, and we look forward to working with the Biden Administration and Congress to ensure these investments not only become a reality, but are just the start of the work that is done to repay the nation’s debt to coal communities.”

Lou Ann Wallace, Russell County Virginia, Supervisor
“My community of Dante, in Virginia’s coal region, has experienced first hand the flooding and landslides and other problems due to abandoned mining sites, and so, like many other Appalachian communities, we need to ramp up our efforts to reclaim and restore those sites and turn them into innovative economic hubs that create jobs in agriculture, tourism, retail, and renewable energy. It’s estimated that the reclamation work alone would create 13,000 new jobs across Appalachia. This level of federal investment would be key to making that happen.”

Adam Wells, Appalachian Voices Regional Director of Community and Economic Development
“We’re excited to see the president announce a plan to create jobs while addressing vital needs, growing clean infrastructure and remediating environmental hazards, including abandoned mines. Cleaning up abandoned mine lands is a way to jump-start the recovery and create immediate jobs in places like Southwest Virginia. The American Jobs Plan puts our region and the nation on a path towards a more sustainable and prosperous future.”

Barbara Vasquez, Western Organization of Resource Councils, Member from Cowdrey, Colorado
“Paying to plug and reclaim the oil and gas industry’s burgeoning inventory of orphaned and abandoned wells, infrastructure, and roads across the country is the right thing to do now. It will create tens of thousands of jobs, end emissions that damage public health and climate, and resolve the mess that has been impacting farmers, ranchers, and others who rely on the land.” 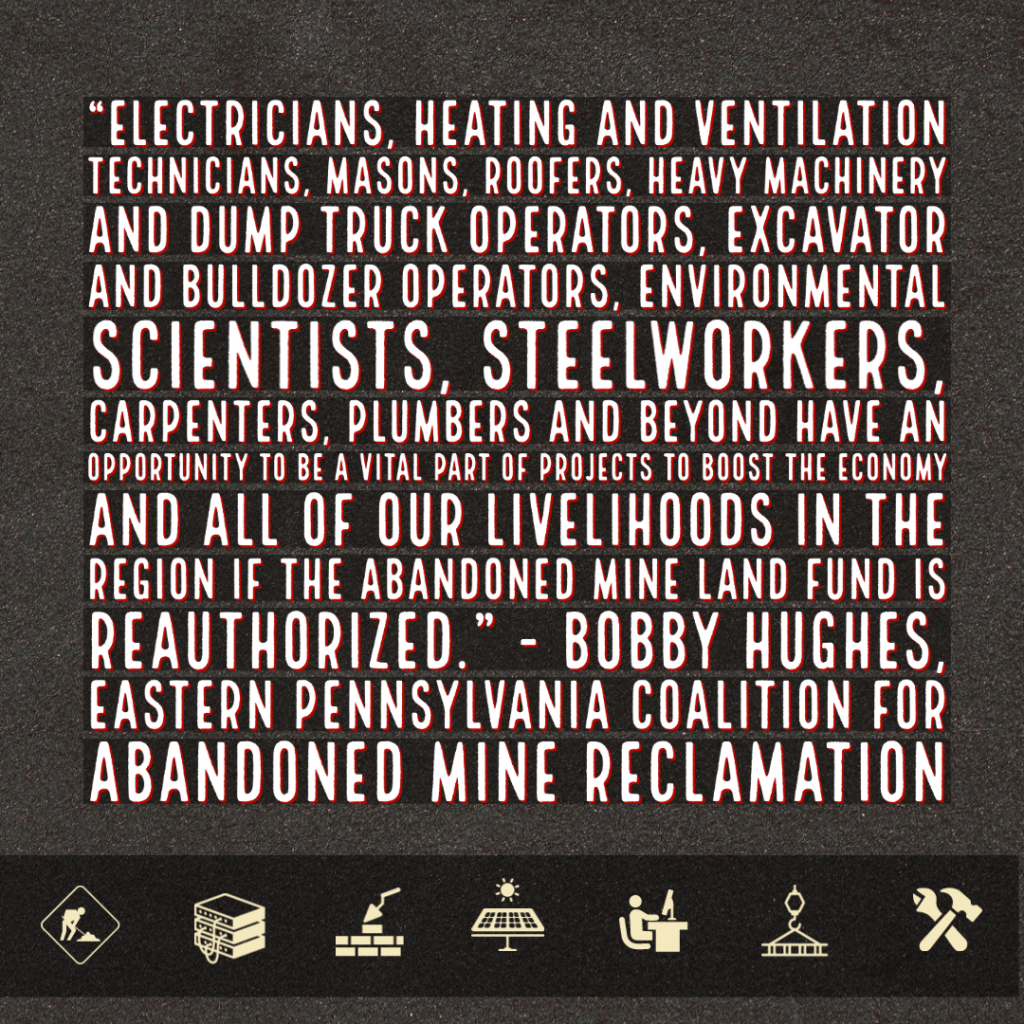