As the economic downturn in response to COVID-19 continues, economic forecasters expect the impact of the pandemic will accelerate the retirement of coal-fired power plants. Even before COVID-19, the U.S. Energy Information administration expected coal consumption to decline by more than 23 percent in 2020. 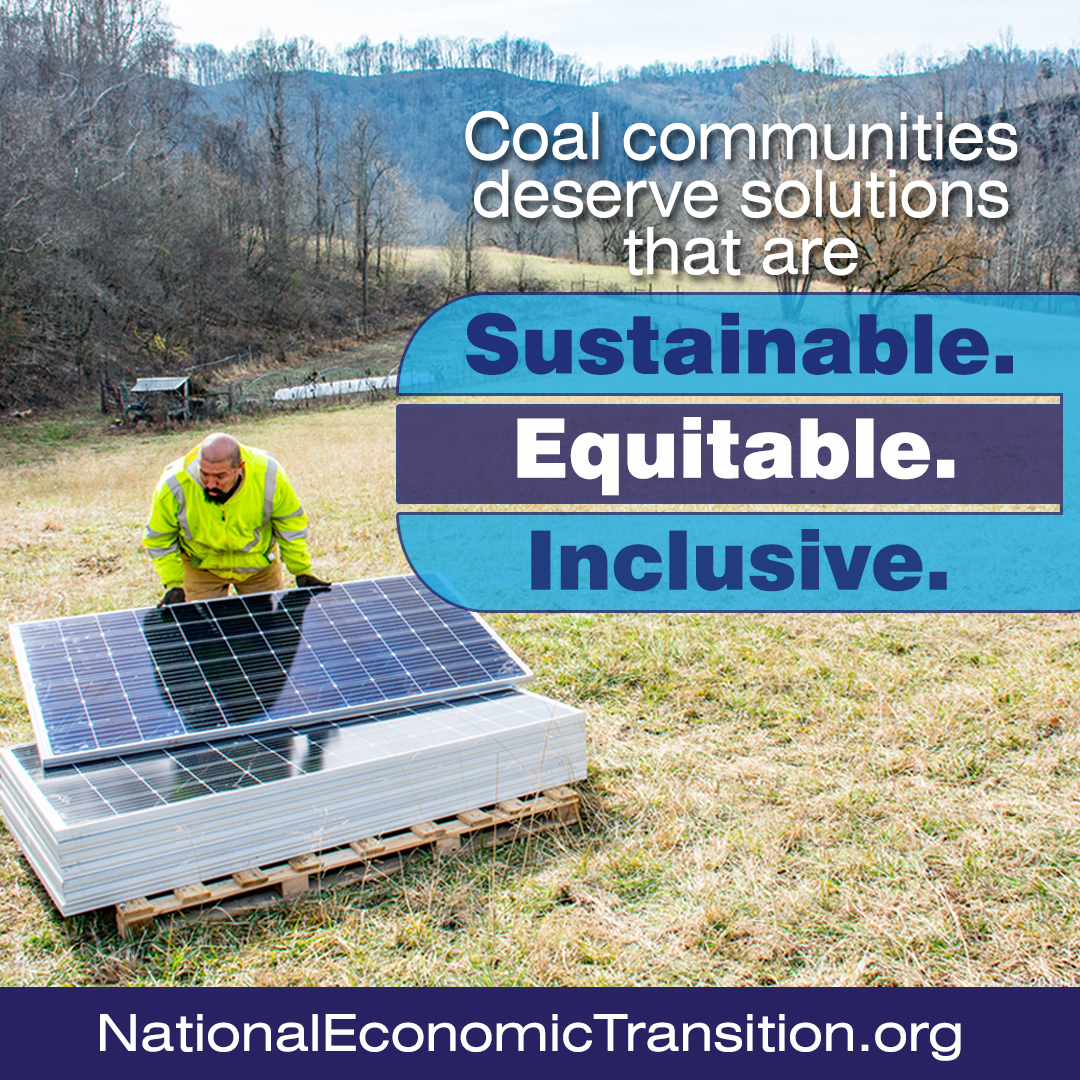 Communities that once relied on coal face a potentially devastating crisis on top of existing instability. This crisis could mean more job losses, the further erosion of the tax base, and cuts to vital services layered on in places already struggling following previous recessions amid decades of inequality and widespread poverty. This perilous situation makes challenges for low-income communities, communities of color, and tribal communities already disproportionately left behind by the status quo even more significant.

The National Economic Transition (NET) platform, unveiled at the end of June, gives federal and national leaders and policymakers the framework for an ambitious national transition program that supports the people and places affected by coal’s decline. And the ReImagine Appalachia blueprint, released in July, outlines how to build a 21st century economy that’s good for workers, communities, and the environment in the Ohio River Valley.

The NET platform was crafted by local, tribal, and labor leaders living and working in coal communities, along with nonprofit sector partners like Appalachian Voices, during a year-long collaboration led by the Just Transition Fund, and is endorsed by 80 organizations and leaders. The group included representation from coal mining communities in Appalachia, the Illinois Basin, Montana, Wyoming and elsewhere as well as communities with coal fired power plants from the Navajo Nation to Central Minnesota.

Amid the sharp decline of the coal sector over the past decade, these community leaders have already developed and implemented local policy solutions that help tackle the climate crisis and spur inclusive, equitable, and sustainable economic growth in places that once relied on coal. The NET platform presents national leaders with a path to scale up these solutions in coal communities across the country by making a big, bold investment in the platform’s proposed comprehensive national transition program that, when implemented, will create vibrant, resilient, inclusive communities.

“Communities in Virginia’s Great Southwest have been working diligently for years to bring new economic opportunities to our region,” said Lou Ann Wallace, a St. Paul, Va., business owner and community leader in St. Paul, Virginia. “We’ve taken great pride in powering America for generations, and we believe that federal commitments and investment will bring our new vision to fruition. This new way of thinking and working will once again bring employment opportunities back to the Heart of the Appalachian Mountains.”

The NET platform urges national leaders to invest in the development of a national transition program built on seven pillars of policy recommendations that put communities in the driver’s seat, including proposals to: 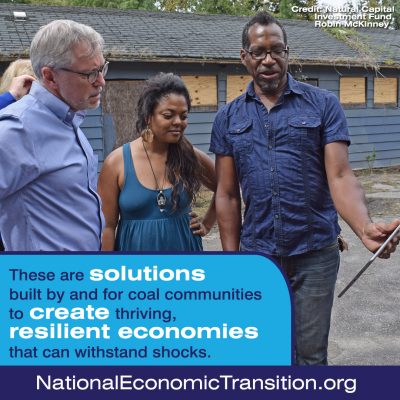 Many of the policies that support these seven pillars are before Congress right now — earlier this month, the U.S. House passed the RECLAIM Act and reauthorized the Abandoned Mine Land Program. (Urge your senator to take action on the RECLAIM Act and abandoned mine land cleanup). Other proposals are more forward-looking and have yet to be introduced.

“An equitable, sustainable economic transition won’t happen on its own or overnight, in Appalachia or anywhere else,” said Adam Wells, regional director of community and economic development at Appalachian Voices. “Deliberate, bold and swift interventions at a national scale are absolutely necessary. If we do this right, the communities and workers that gave the most in the fossil fuel based economy of the last century will be among the first to benefit from the emerging new economy; failure is not an option.”

The ReImagine Appalachia blueprint is based on the premise that the people of Appalachia’s Ohio River Valley — spanning West Virginia, Kentucky, Ohio, and Pennsylvania — must have a say in how the ongoing change in the region unfolds. Convened by Policy Matters Ohio, a state-focused economic and policy research institute, and its sister organizations West Virginia Center on Budget and Policy, Keystone Research Center and Kentucky Center for Economic Policy, the planning group reflected voices from across the region. More than 60 organizations, including Appalachian Voices, have endorsed the plan.

“Our vision creates a federal jobs program that can put people back to work in largely outdoor jobs while simultaneously helping us to address the climate crisis and the need for racial justice while also maximizing the creation of good union jobs,” said Amanda Woodrum, senior researcher at Policy Matters Ohio. “We deserve nothing less.”

The ReImagine Appalachia blueprint states that a New Deal that works for the Ohio River Valley would need to meet three overarching principles, and explains what each of these priorities entail in more detail.

“Southeast Ohio, the Ohio River Valley and too many people and families across our four states never recovered from the Great Recession,” said Hannah Halbert, the executive director of Policy Matters Ohio, noting that high poverty rates in the region during recent years of national economic growth.

“This time has to be different,” she continued. “This time policymakers at all levels must include the people of Appalachia in our national recovery. This crises demand from leaders real, lasting and structural change. And it is not a matter of if but when. When our leaders and the nation finally rise to the occasion, people from Appalachia need to be at the table.”
The coalition plans to release a series of white papers presenting further details of the framework in the coming months, and is seeking continued input and support from stakeholders.

The crises facing coal communities predate the coronavirus pandemic, but the current situation is exacerbating an already-urgent set of interlocking problems.

These challenges aren’t new. In the Ohio River Valley, in Southwest Virginia, in the Navajo Nation, in the Illinois Basin, and in the many other regions represented in these two plans, local, labor and tribal leaders have been working on solutions to these issues for years. These two proposals build on that work and on collaborative dialogues across regions and areas of expertise.

We need national leaders to recognize the scale of the challenges our communities face, and to understand that in order to make meaningful progress on climate change, equity, and economic opportunity, we need serious federal support for the solutions that coal communities have identified. The National Economic Transition platform and ReImagine Appalachia blueprint give leaders a clear framework for how we can invest in and create the future that Appalachians and coal community residents across the nation deserve. The roadmaps exist — it’s time for leaders at all levels to get to work.