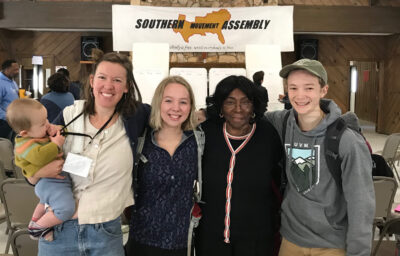 In November, two 17-year-olds, a 75-year-old, a 6-month-old, and a 33-year-old (that’s me) hopped on a plane together to represent the pipelines resistance in Virginia at the Southern Movement Assembly, 8.0. We flew to Mississippi to connect with grassroots social justice movers and shakers from across the South.

The Southern Movement Assembly is a gathering of Southerners who work to protect their communities from harmful policies and systems at the local, state, and federal level. Here’s an assortment of wonderful work I heard about:

And so much more. The assembly attendees gathered and developed strategies in three focus areas: 1) protect and defend, 2) people’s democracy, and 3) a new social economy.

Ella Rose, a resident of the Union Hill community in Buckingham County, Va., was the elder of our cohort. Her home is adjacent to land Dominion Energy bought to build a compressor station for the proposed fracked-gas Atlantic Coast Pipeline. She and other members of the group Friends of Buckingham have reached out to communities and allies across the country to share the story of the environmental justice struggle that is literally playing out in her backyard.

We are relatively new to activism and its implications on the world around us. In recent months, we have gotten more and more involved in the climate justice movement that is taking place in Appalachia. We founded a group of like-minded youth called the Appalachian Youth Climate Coalition, which has been seeking to further youth participation in climate activism in rural Appalachian communities.

Some days, it can feel as if we are all alone. Both of us rarely read articles on climate degradation anymore, and struggle to sit through climate related documentaries. This is not because we have lost passion for the topic, but rather because it can feel as if no one is paying attention to the injustices around the world.

It is easy to get bogged down in the mentality that you and your peers are alone in the world. Having the opportunity to travel to SMA 8 revealed to us that in every community around the world there are like-minded people that are fighting for justice. Whether their fight revolves around the planet, immigration, race, or any other worthy cause ceased to matter to us. Being able to sit and talk with older climate activists like Ms. Ella, and conversing with other youth organizers from across the south showed us that maybe our world isn’t so small.

All in all, SMA 8 opened up our worldview and reminded us that even when you are up against insurmountable odds, you are never alone.

After the assembly, participating groups continue to check in and collaborate, moving the plan they created together forward step by step. Click on the links below to learn more about the organizations mentioned in this post: