In her many hours of looking out the window of her home in rural Buckingham County, Va., Ella Rose has yet to spot the black bear. Her neighbors have seen it, so she knows it’s there. She spies wild turkey, deer, an occasional fox and all manner of birds. Watching the wildlife is a great joy for her, but it may soon come to an end. 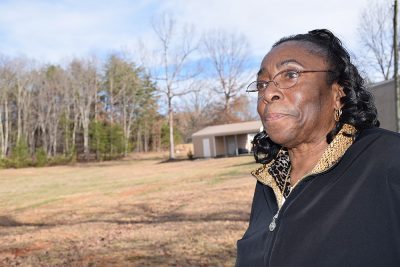 Dominion Energy, the lead developer of the Atlantic Coast Pipeline, plans to build a massive natural gas compressor station in her community of Union Hill. Her home will probably be the closest – perhaps 500 feet. The industrial facility would run 24/7, creating a constant din. Then there’s the air pollution and water pollution to worry about – and maybe explosions.

“If that compressor ever blows, it’s going to take us all to Kingdom Come,” she says.

Ella, 74, grew up in adjacent Nelson County, and went to Washington, D.C., to attend one of the first black business colleges in the country, hoping to become a secretary. She ended up working at a D.C. restaurant for 26 years, and another 21 years in food service at the Bolling Air Force Base.

She had always planned on returning to the Virginia countryside to retire in peace and quiet. In 2012, she moved into the modest home on 1.9 acres she had purchased years before. Just two years later, Ella learned about the giant fracked-gas pipeline and compressor station headed her way. And then came plans for a major telecommunications tower near her home as part of the project. 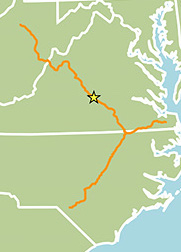 Ella Rose’s location in the path of the Atlantic Coast Pipeline.

“I want to do other things without worrying about how they’re going to contaminate my water and how am I going to be able to breathe when I get older.”

She suspects Dominion chose her small, predominantly African-American community purposefully. “I guess they were anticipating nobody speaking up,” she says.

They were wrong. Ella — and other community members — has become a staunch advocate for stopping the project. She attends monthly meetings of Friends of Buckingham, a local group formed to oppose the gas infrastructure and preserve the natural and cultural resources of the county, and has attended countless government meetings.

“It seems clear the voices of Union Hill have been ignored throughout this entire process. Our lives count too, and they should not be sacrificed in favor of financial interest,” she says.

In March, the company told Ella they were going to start cutting trees near her, and she soon heard the buzz of chainsaws in the woods.

“They’re running all the animals out of there,” she says. “I don’t like the idea they can infringe on you. I wasn’t expecting this. This is not the plan I had for my retirement.” – By Cat McCue