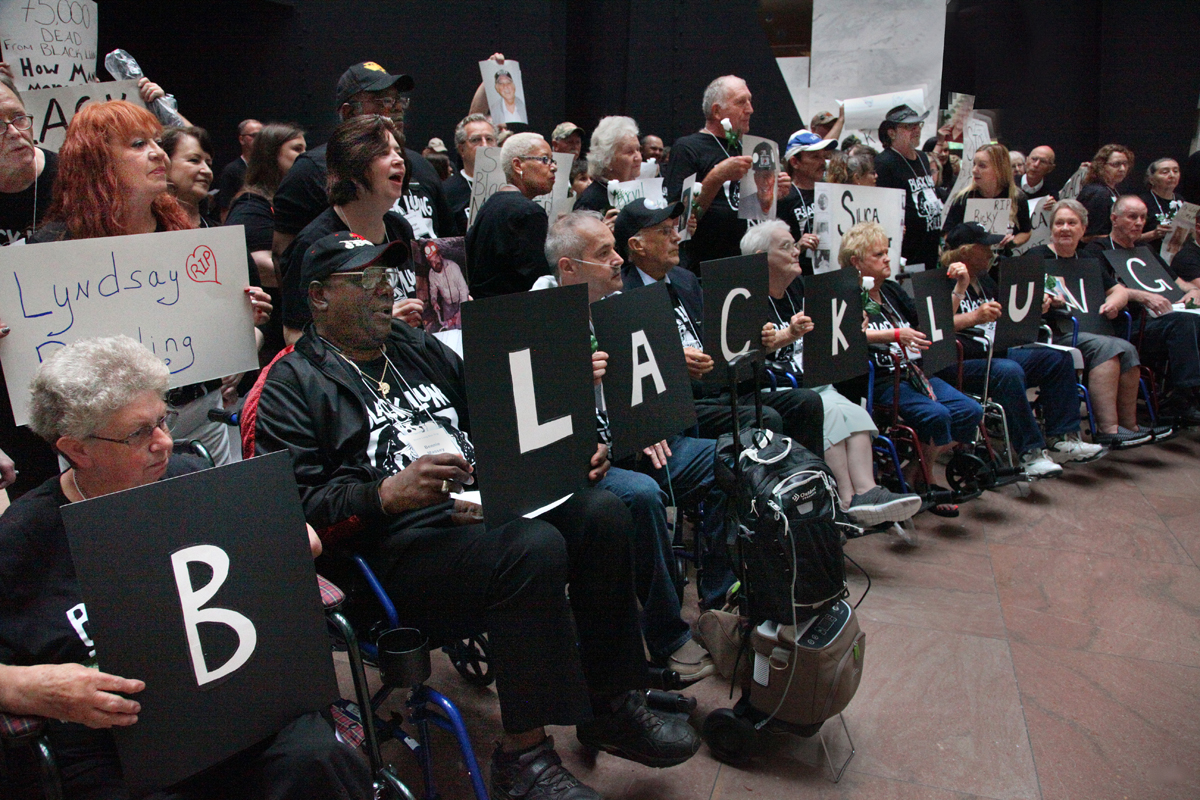 Miners and their families hold a demonstration in the Philip A. Hart Senate Office Building in Washington, D.C., in July 2019. Photo by Earl Dotter / EarlDotter.com

Congress reinstated the excise tax on coal companies that supports the Black Lung Disability Trust Fund through the end of 2020! While only a temporary fix, this is still a win for coal miners and their families affected by the deadly disease. The short-term extension was included in the Fiscal Year 2020 budget that the president signed into law on Dec. 20. Miners are still urging Congress to extend the black lung excise tax beyond 2020.

Also included in the budget are provisions that secure pension benefits for coal miners that were first outlined in the Bipartisan American Miners Act of 2019. This secures funding for the 1974 Miner Pension Plan to prevent its insolvency and also expands healthcare benefits for miners whose benefits have been jeopardized by recent coal company bankruptcies.

According to U.S. Senate Majority Leader Mitch McConnell, these measures will secure the pensions of 92,000 coal miners and protect healthcare benefits for 13,000 miners.

Coal miners suffering from black lung disease may get some good news for the holidays. By the end of 2019, Congress is expected to reinstate an excise tax on coal companies that finances the Black Lung Disability Trust Fund, which provides healthcare and benefits for miners suffering from the disease. The tax automatically decreased by half in 2019, when Congress failed to act and extend the historic tax rate. But this would only be a temporary fix, as Congress will have to act again to extend the tax beyond 2020.

Black lung disease, or coal workers’ pneumoconiosis, was once believed to be a condition relegated to an older generation of underground coal miners. It is a preventable disease, and therefore should be decreasing as better work protections are instituted. But in 2016, NPR uncovered a surge in black lung cases in Appalachia. The story told the nation what many in Appalachia already knew — that new cases of the disease were continuing to be diagnosed, often in younger miners, and often in its most severe form — progressive massive fibrosis. These findings not only highlight the need for better protections for miners, but also the need for increased funding for those who already have the disease.

A December 2019 study by the National Institute for Occupational Health and Safety (NIOSH) has shed further light on the surge in black lung. The study found that 15 percent of samples on Central Appalachian surface mines exceeded the exposure limit for silica dust set by the Occupational Health and Safety Administration (OSHA). The agency issues regulations to protect the health of many types of workers, but another agency, the Mine Safety and Health Administration (MSHA), sets regulations specific to coal mining.

“The exposure to coal mine dust declined over time,” lead researcher and industrial hygienist Brent Doney told WJCT News in December. “However … when you look at the percentage of silica that was in those samples, that didn’t drop.”

As mining continues in Appalachia, only thin coal seams remain and more quartz-containing rock must be blasted to expose the coal. This has likely resulted in increased silica dust on many mine sites. Silica is more harmful to lungs than coal dust. MSHA has not updated its silica standard since 1985. The MSHA standard currently allows miners to be exposed to twice the level of silica allowed by OSHA.

Earlier this month, Taxpayers for Common Sense recently released a report detailing the history of the excise tax and the Black Lung Disability Trust Fund. Congress first authorized the tax in 1977 to ensure that coal companies paid for a disease the industry was causing. The tax was increased several times, because the trust fund has consistently operated at a deficit. Congress last extended the tax in 2008, continuing the rate originally set in 1985. Despite the trust fund continuing to run at a deficit and the increasing number of black lung cases in younger miners, Congress allowed this extension to automatically expire at the beginning of 2019.

Though Congress is about to pass a short-term fix, they need to do more to make sure the miners are adequately cared for. We’re asking Congress to pass a bill to maintain the tax at its full rate for the next ten years.

You can help by contacting your representative now (we’ve made it easy for you)!