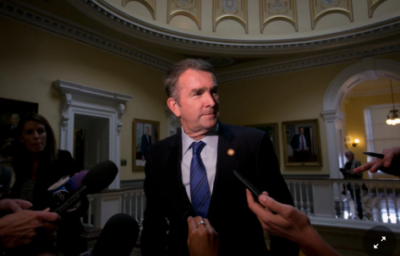 This letter-to-the-editor from Appalachian Voices’ Executive Director Tom Cormons was first published digitally in the New York Times on Wednesday, November 27, 2019, and in print on Thursday, November 28, 2019.

Virginia Democrats, having won control of the Legislature for the first time in a generation, are eager to advance their agenda by working with Gov. Ralph Northam. But viewing Virginia’s off-year election in purely partisan colors obscures significant voter concerns that both parties’ establishments have yet to address.

Consider this: In a bid to salvage its influence over Virginia’s energy policy, Dominion Energy — the state’s biggest corporate campaign donor by far — increased its political giving by more than 35 percent over any past election cycle this decade.

Yet this largess failed to prevent the election of nearly 50 candidates — including all eight who flipped seats to Democrats — who pointedly refused its money.

Appalachian Voices is part of the Virginia Energy Reform Coalition to create a more fair, competitive energy system in the Commonwealth.

Until recently, taking Dominion’s money and supporting its self-serving legislative proposals were widely considered de rigueur by both parties. Virginians know that Dominion has amassed hundreds of millions in excess profits as Virginia families struggle to afford their electric bills.

Rural landowners and environmental justice advocates have united in opposition to Dominion’s proposed Atlantic Coast Pipeline. And the fact that sinking billions of captive customer dollars into that fossil fuel project flies in the face of Governor Northam’s well-received call for 100 percent zero-carbon electricity by 2050 has not gone unnoticed.

The next General Assembly, and the governor, have a clear mandate to put an end to the special favors that enrich monopoly utilities at great cost to Virginians.