Before much of what are now Central and Southern Appalachia’s public lands gained federal protection in the late 19th and early 20th century, they were the lands that nobody wanted. 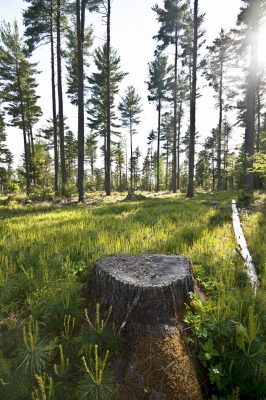 By selectively removing undesirable trees while leaving preferred trees standing, forest managers hope to guide the next generation of forest. But opinions vary on how often —or if — this practice is helpful. Photo by Neil P. Thompson

“Almost all of our eastern national forests are these lands that were essentially cut over,” says Jim Sitts, Appalachian timber manager with Columbia Forest Products, a hardwood product manufacturer. “They weren’t managed, they were just used,” he adds.


Sitts is thankful that the government had the foresight to buy these lands after the mass clearcuts.

“[Most people] don’t realize when they take a Sunday drive through the national forest and think, ‘wow, what a beautiful forest this is,’ that it’s an 80- to 100-year-old stand of timber that came up from a clearcut at the turn of the last century,” he says. “Not that we want to go back to managing like that.”

Today, the U.S. Forest Service is responsible for the management of national forest lands and conducts timber harvests and prescribed burns — fires that are intentionally set in a designated area. The agency typically cites a need to improve forest health and biodiversity, as well as economic benefits through timber sales. In Central and Southern Appalachian forests, two issues the agency often focuses on are creating more young forest lands for certain species and mitigating the decline of fire-resistant species like oak and pine over the last century. 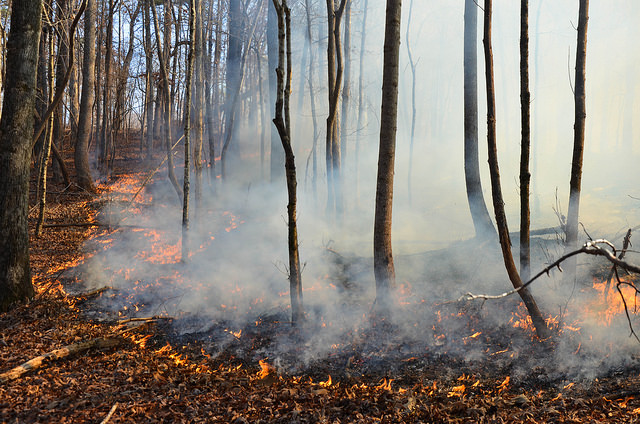 According to a 2017 Forest Service report, fire has played an important ecological role in Appalachian forests for millennia. The report states that fire “essentially operated as a filter on tree establishment within fire-prone sites by destroying the seedlings of fire-sensitive species.” However, due to human efforts to suppress wildfires, these and other fire-dependent ecosystems are being replaced by more fire-sensitive species like mountain laurel that crowd out mature trees and block light from reaching seedlings. Targeting these species for harvest can allow for oak and pine to regenerate more successfully — but many environmental groups believe the Forest Service overuses these methods.

The plaintiffs asserted that the project put a popular trout stream alongside the timber sale site at risk of sediment pollution and that the Forest Service hid risks from the public and ignored citizen concerns over several years. The conservation groups warned that the project would repeat problems associated with the nearby 2015 Hogback timber sale, where the groups allege soil loss caused by logging has prevented trees from growing back.

“There was no indication that the Forest Service learned anything from Hogback, and the Tumbling Creek project was even riskier, with more ground disturbances, larger harvests and steeper slopes, all concentrated on the banks of Tumbling Creek,” Axel Ringe, conservation chair for the Tennessee Chapter of the Sierra Club, said in a statement.

The Clinch Coalition, a Virginia grassroots environmental organization, has been critical of timber harvests in Jefferson National Forest since the group was founded in 1998. In a 1999 statement still endorsed by the group, the coalition claims that the “overwhelming majority of timber harvest sites have been managed in a manner that degrades the forest ecosystem leading to declines in forest health, water quality, and ecological diversity.”

According to the organization’s president, Diana Withen, “Ideally, The Clinch Coalition would like to see an end of commercial logging on national forest and other public lands but until such a time that this happens, we are committed to working with the Forest Service on sustainable forest management planning in the hope that it will pursue sustainable logging practices.”

According to the Forest Service’s Southern Regional Planning Director Peter Gaulke, timber harvest is important in order to maintain a variety of forest succession stages, or periods in a forest growth cycle. For example, wildflowers and shrubs that grow first in a forest after clear-cutting are considered early succession.

In an email, Gaulke commented on the composition of forest types in the general landscape, both within and beyond national forest boundaries. “Our landscapes are generally lacking early [successional] stages as called for in our forest plans,” Gaulke wrote. “Timber harvest allows for us to have the range of [successional] stages to meet the habitat needs of a variety of wildlife species.” 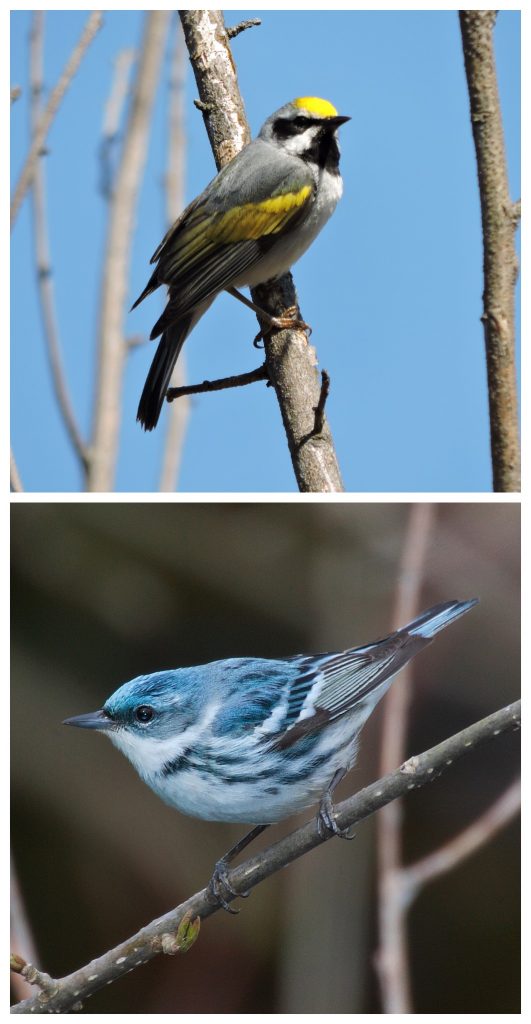 The golden-winged warbler lives in the early successional stages of forest. Since the songbird’s population is declining, timber harvest in more mature forest areas can help create more habitat.

According to a 2005 Forest Service paper, “The high reproductive success of the [golden-winged warbler] in clearcuts in the Southern Appalachians, while the species is disappearing from areas without management intervention, argues strongly for repeated disturbances in these landscapes.”

Yet these practices might take away habitat from vulnerable species like the cerulean warbler that prefer later successional stages of forest. The U.S. Fish and Wildlife Service states that “some forest management practices remove the largest trees, eliminating the structurally diverse canopy that ceruleans need.”

Jim Sitts with Columbia Forest Products thinks the public lands in Western North Carolina play an important role in the landscape. He says that national forests add “a lot of value because you have these core forests, an intact forest landscape, whereas all the private land is very fragmented and becoming more and more fragmented … It’s a place where all your different species can seek refuge.”

According to Curtis Smalling, director of bird conservation for the nonprofit environmental organization Audubon North Carolina, the state is lucky because a lot of the closed-canopy bird populations are fairly stable, including the cerulean warbler population.

He states that it’s important to think about how public and private lands support each other.

When people look at the Southern Appalachian forests, Smalling says, they typically point out that forest interior species are doing fine, which he attributes to the region’s expansive closed canopy system. Smalling explains that increasing early successional habitat for birds like the golden-winged warbler “may help those species but then reverse the stability of the others, which we don’t want to happen.”

“We want to help early successional birds like the golden-winged warbler, but we don’t want to do that at the expense of other closed-canopy system birds,” he adds.

Forest Service Planning Officer Michelle Aldridge in North Carolina says, “I think there is a role to look beyond the Forest Service line and think about how the forest is affecting and is affected by the things that are standing next to it.”

“When we put Forest Service lands in the context of a broader landscape, it helps the landscape goals become more clear,” she adds.

Native Americans are widely thought to have used fire as a tool to clear underbrush and improve wildlife habitat for thousands of years. Fire-resistant trees like oak and pine depend on regular fires to weed out competitors, and small-scale fires can reduce dry fuel to prevent catastrophic wildfires and create a more diverse habitat.

In the last century, however, fires have been largely suppressed to protect human interests. This has led to oak and pine forests being replaced by more fire-sensitive species like red maple, according to a 2017 Forest Service paper. Due to this, the Forest Service often makes use of prescribed burns, timber harvests and other methods to mimic the forests’ fire-adapted ecosystem. 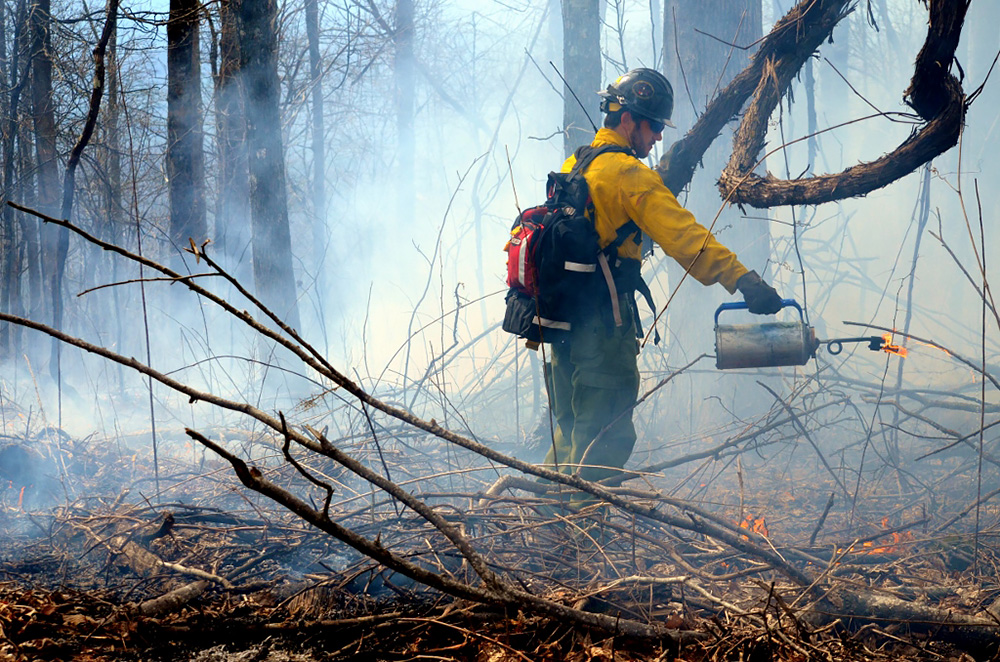 “Contrary to popular belief, all clearcuts do not remove every tree from a stand; instead, ‘leave trees’ are left behind to promote biological and structural diversity. This process mimics how wildfires may leave certain trees unscathed in their path, while burning others,” wrote the Forest Service’s Peter Gaulke in an email.

But Josh Kelly, public lands field biologist with MountainTrue, a Western North Carolina grassroots environmental nonprofit organization, states that there are some key differences between fires and clearcuts.

“I think that logging projects can mimic the light environment that you get after a very severe fire, but there are a lot of ways that they are not similar — in fact, they’re kind of the opposite,” Kelly says. “Fire, in general, kills the smaller trees in the forest, and logging tends to take the largest ones, so you have big differences in the resulting forest structure. You also have big differences in the species composition that occurs because fire actually gives a competitive edge to some species that don’t do as well in the absence of fire.”

“There’s a lot of benefit that the fire provides that mechanical management just can’t provide,” he adds.

According to Gaulke, “prescribed fire is critically important in our fire adaptive ecosystems,” and is the Forest Service’s “most common and most important forest management tool” in the Southeastern United States.

Forest management plans often include goals for amount of acres burned. But groups like Heartwood, a regional nonprofit forest conservation organization, have been critical of the Forest Service’s wide use of prescribed burns.

“While fire is not completely without a place in the eastern hardwood forests, having been used by Indigenous Americans as a management tool in a variety of ways, the fires would have been small and unlikely to exceed 8 acres,” Heartwood states on their website. “A typical prescribed burn on eastern public land currently ranges from 200-500 acres, with a recent project in Kentucky planned for thousands of acres.”

According to Heartwood’s website, these large burn projects result partially from a 2001 policy change that increased the Forest Service’s budget for fire management. The organization claims this “acts as an incentive for the Forest Service to find reasons to burn in the eastern United States, thereby increasing their revenue.”

One prescribed burn that attracted controversy was a 2014 proposal to conduct a 1,500-acre burn at Straight Fork in the George Washington and Jefferson National Forest. The Forest Service stated it would improve oak and pine regeneration, create early successional habitat and reduce wildfire fuel.

The Clinch Coalition formally objected to the proposal in a comment submitted to the Forest Service, claiming the agency had not provided enough information and that the topography of the area suggested it “would not likely benefit from and could be harmed by fire.”

According to The Clinch Coalition’s Associate Director Steve Brooks, a forest service representative explained to him that although there are some areas in greater need of burning, they are harder and more expensive to reach.

“It would be much better to use the limited funds to burn fewer acres where it is needed, than burn many acres where it is not needed and may potentially cause harm,” Brooks wrote in the objection. The agency later decided to indefinitely suspend the burn after the comment period ended.

According to the Forest Service’s Michelle Aldridge, the public has a critical role in providing input on forest management plans, which set goals for activities like prescribed burns and timber harvests.

“I think it’s important for people to know about and be involved in because it’s public land, it’s land that is shared by all of us,” Aldridge says. “Management of that land is something that Americans have a stake in.”

Editor’s Note: This article was updated on Sept. 4, 2018, to clarify that Jim Sitts stated “not that we want to go back to managing like that,” in reference to the historic mass clearcuts of Appalachia’s forests.