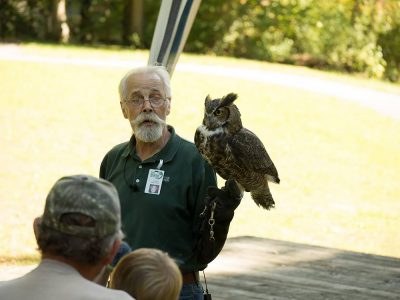 The Clinch Coalition is busy preparing for its annual High Knob Naturalist Rally. The free, day-long event with activities and presentations is designed to showcase the extraordinary biodiversity and natural wonders of Southwest Virginia. And this year there’s a special happening on the agenda — The Clinch Coalition’s 20-year anniversary celebration.


The grassroots environmental group formed in 1998 when residents of Virginia’s far southwest corner joined together in opposition to a proposed 1,400-acre timber sale in the Bark Camp Area of Jefferson National Forest’s Clinch Ranger District. With the support of then-Congressman Rick Boucher, the group led an awareness campaign and participated in the public input process; ultimately, the U.S. Forest Service reduced the size of the timber sale to 620 acres.

The Clinch Ranger District is widely considered one of the most biodiverse zones in North America, and by some measures, the world. The area also hosts a number of popular outdoor destinations, including campgrounds and recreation areas, the High Knob and Birch Knob observation towers, a variety of trails, and lakes and rivers frequented by boaters, anglers and swimmers. Steve Brooks, the coalition’s associate director and a founding member, notes that because so much of the surrounding landscape has been mined for coal, the Clinch Ranger District is particularly valued for its recreation and ecology. This also makes the national forest valuable to the timber industry.

“This area of Virginia was considered kind of a timber basket for the Forest Service,” says Diana Withen, who became involved in the late ‘90s and is now The Clinch Coalition’s board president. “I’m a biology teacher,” she says, “so the more I learned about the biodiversity here and that we have a lot of rare and endangered species here, it made me want to protect the forest as much as a citizen can.”

The organization’s past accomplishments include blocking the development of a 30-mile ATV trail on High Knob, successfully opposing a proposal to remove surface decorative rock from High Knob’s Cliff Mountain section, and implementing a stream monitoring program. 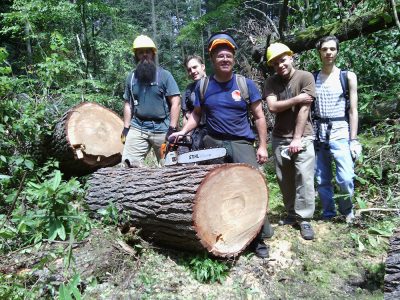 Aware that the Forest Service is often shorthanded, The Clinch Coalition pitches in by holding events where members and other volunteers help clear, maintain and build trails. The group officially adopted the 18-mile Chief Benge Scout Trail in 2013 to ensure it stays in good condition. Brooks notes they’ve also raised money for features such as bridges and bear-resistant trash cans.

Harry Warren and Martie Bell, both active members, embody that sense of stewardship. The couple serves as campground hosts at High Knob Recreation Area, home of the naturalist rally. From their perch at the campground, Bell and Warren have witnessed the agency’s funding shortfalls and need for volunteers. In 2017, The Clinch Coalition helped the Forest Service conduct the inspection surveys needed to open campgrounds, picnic areas and other sites for the season, and has helped mow lawns and otherwise tend the area.

The group also aims to increase local awareness of the region’s natural riches, particularly among children. The Clinch Coalition sponsors an Earth Awareness Art and Essay Contest in local schools, with different categories for various age groups, and has hosted a free, public naturalist rally every year since 2007 (see sidebar).

And in 2014, the organization kicked off the inaugural 10-kilometer Hellbender Race — with more than 2,000 feet of elevation gain — as a fundraiser and to educate attendees about the rare, large hellbender salamanders found in the region.

“I think when you grow up in an area, you oftentimes don’t realize what a treasure it is, especially here,” says Withen. “I think being able to raise the awareness of what a special place this is on the planet will hopefully get more people interested in trying to protect it.” 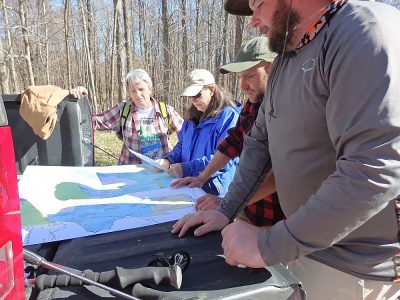 Hikers study a map in Nettle Patch, where the Forest Service is proposing a large timber project. Photo courtesy of The Clinch Coalition

In 2016, The Clinch Coalition submitted detailed comments during the initial public input stages of the Forest Service’s proposed Nettle Patch logging project, and at press time was continuing to advocate against the agency’s stated plan. This summer, the coalition also drew attention to the negative impacts on water quality caused by local ATV trails running through streams.

Going forward, group members see new and familiar challenges as woods face pressure from logging for timber, chip mills and biomass power. Withen also details new opportunities to protect and value the forest, such as local interest in tourism and harvesting medicinal plants and maple syrup. As the group celebrates 20 years, attendance is strong at the monthly meetings, and an estimated 350 people attended the 2017 High Knob Naturalist Rally.

“[The Clinch Coalition] is a very issue-driven, love-of-the-Earth group that does a lot beyond just saving the trees,” says Bell. “It’s a group that really has an impact; it doesn’t just talk, it has actions.”

Learn more or become a member at clinchcoalition.net. 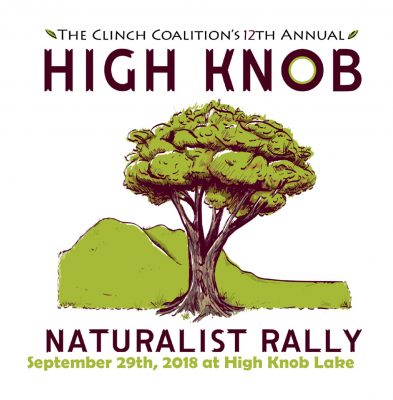 The family-friendly High Knob Naturalist Rally celebrates the natural world of Southwest Virginia. Attend programs about bats, snakes, wolves, birds of prey and wilderness survival presented by knowledgeable naturalists, or participate in guided hikes on topics such as mushrooms, salamanders, regional geology and edible and medicinal plants. Additional activities throughout the day include canoeing, fly fishing and nature arts and craft.

FREE event; entrance fee is waived and lunch is provided. Folks are encouraged to bring chairs. Campsites are available at High Knob Recreation Area for $10/night.