Where Does Your Forest Stand with the Plan? 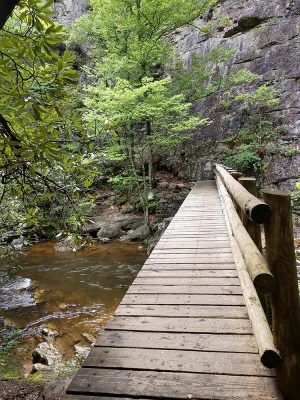 Beneath the bureaucracy of the national forest planning process lies a valuable opportunity for citizens to voice their opinions on the future of public land.

This act requires national forests to develop a plan every 15 years — budget permitting — for how the land will be used in the future and undergo a public comment period. The plan initiatives often include safeguarding native plant diversity, protecting air quality and watersheds, and determining the extent of timber harvesting as well as other government and private projects.

In 2012, the Obama administration revised the planning rule to expand the focus from commodity production to further emphasize long-term ecological sustainability and increase community involvement.

In North Carolina, the forest planning process for the Pisgah and Nantahala National Forests is underway. Here is an update on where the other national forests in the Appalachian region are in their planning process:

Georgia’s Chattahoochee National Forest revised its plan in 2004. It is due for revision in 2019, but the forest service is uncertain about the next start date. This July, the forest published a Monitoring and Evaluation Report to assess progress in the implementation of the 2004 plan.

Tennessee’s Cherokee National Forest completed its last plan in 2004. In an email, Public Affairs Officer Terry McDonald wrote that, “under normal circumstances, the plan would be up for revision in 2019, but the agency is behind schedule for many reasons (budget, new rule, etc.).” McDonald stated that they will likely initiate the next plan between 2024 and 2026.

Daniel Boone National Forest in Kentucky completed its last plan in 2004 and the next is scheduled for 2024. Forest staff are currently revising their plan to include new scientific information on the endangered Indiana bat population.

The George Washington National Forest, which is primarily in Virginia and also crosses into West Virginia, revised its forest plan in 2014. The plan increased stream protection buffers, opened more land to potential logging and recommended areas for wilderness and national scenic designation.

The Jefferson National Forest, which spans portions of Virginia, West Virginia and Kentucky, revised its plan in 2004. The revision of the Jefferson Forest Plan is not scheduled in the immediate future.

Monongahela National Forest in West Virginia completed its last plan in 2006 and will be due for another revision in 2021.

In South Carolina, Sumter National Forest planning finished in 2004. While under the law they should begin their next plan in 2019, Sumter is currently sixth in a queue for funding and personnel, according to forest staff, so they estimate starting the next revision in 2024 or 2026.

Ohio’s Wayne National Forest completed its plan in 2006. The forest held eight meetings in the spring of 2018 to include the public in the beginning stages of planning. Rewriting is scheduled to begin in April 2019. The forest service says they intend to announce more public meeting dates as soon as August 2018 on the forest’s website. Among other topics, the next plan will address controversial oil and gas fracking in the forest.