By Hannah Gillespie and Ashley Goodman

Long before Europeans brought honeybees to North America, native bees pollinated much of the continent’s plants. According to the U.S. Forest Service, native bees are more efficient pollinators of native crops. This is due to their unique ability to perform buzz pollination, a process where a bee uses a rapid vibration movement to loosen pollen. This allows them to pollinate pumpkins, cherries, blueberries or cranberries, among others.

There are a variety of native bees — some nest underground, while others find or construct holes in wood and rocks. Some species of bees specialize in pollinating distinct plants.

While bees pollinate 80 percent of flowering plants, many other animals and insects help pollinate flora, from bats and birds to butterflies and even beetles.

Below are several of the extraordinary native bees, birds, bugs and butterflies who play vital roles in pollination in Appalachia.
Conservation Sources — The International Union for Conservation of Nature is a coalition that tracks global conservation statuses. The IUCN’s Red List of Threatened Species includes: Least Concern, Near Threatened, Vulnerable, Endangered, Critically Endangered, Extinct in the Wild and Extinct. The nonprofit Xerces Society ranks at-risk pollinators as: Vulnerable, Imperiled, Critically Imperiled and Possibly Extinct. 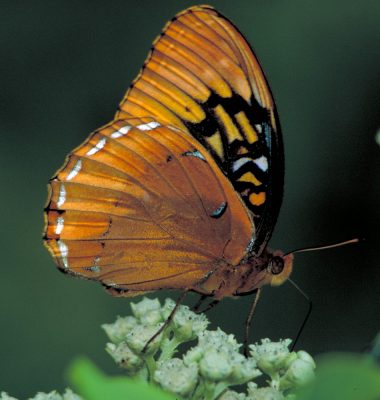 (Speyeria diana)
Range: Southern Appalachians and Ozark Mountains
Habitat: The edges and openings of rich, moist mountain forests
Identification: Males’ wings are black on the lower half and orange with black veins and spots on the outer half. Females’ wings are black with white spots in the outer wing and blue spots on the hindwing. Underwings are green with no spots.
What They Pollinate: Species include milkweed, ironweed and red clover
Caterpillar Host Plants: Violets
When: June through September
Fun Facts: This butterfly is named after Diana, the Roman goddess of the moon and hunting, and protector of women. The Diana fritillary is the state butterfly of Arkansas.
Conservation Status: Vulnerable, Xerces Society 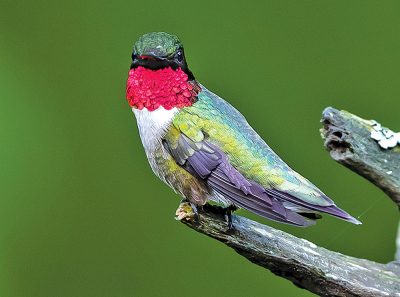 (Archilochus colubris)
Range: Throughout the United States
Habitat: Primarily wooded areas and grasslands, but they also frequent colorful flower gardens
Identification: Ruby-throated hummingbirds are bright emerald or golden-green on the back and crown with gray and white underparts. Males have an iridescent red throat.
What They Pollinate: Wildflowers like cardinal flower, trumpet creeper, penstemons, bee balm and phlox
When: March through July
Fun Facts: Their wings beat over 50 times per second. Hummingbirds make nests from spider webs, grass and plant fibers, which are lined with plant down and camouflaged in dead leaves and lichen.
Conservation Status: Least Concern, IUCN Red List 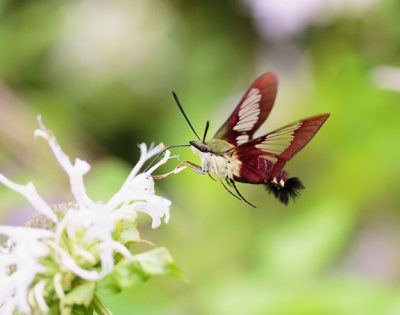 (Hemaris thysbe)
Range: Eastern United States and across Canada
Habitat: Open and second-growth habitats, gardens and suburbs.
Identification: This moth has an olive green back and a reddish-brown abdomen. Its wings are clear, with a black or brown border, and are nearly invisible when they fly. Males have a flared “tail” like that of a hovering hummingbird.
What They Pollinate: Red clover, lilac, snowberry and blueberry, among others
Caterpillar Host Plants: Dwarf and coral honeysuckle, snowberry, hawthorns, cherries and plums
When: March to October
Fun Facts: These moths are easily confused for hummingbirds thanks to their thick, fuzzy bodies and ability to hover. But their antennae, clear wings and lack of a beak will give them away. The moths are 1.75 to 2.25 inches long, while hummingbirds average 3 to 5 inches long.
Conservation Status: Not assessed, IUCN Red List 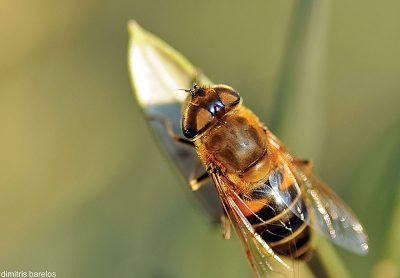 (Eristalis tenax)
Range: Throughout the United States
Habitat: Larvae require areas of stagnant water and decaying organic material to develop. Adults live in rural and urban areas with accessible flowers for nectar.
Identification: Dark metallic blue in coloring and around 10 millimeters long.
What They Pollinate: Species include sassafras, red trillium, skunk cabbage and jack-in-the-pulpit
When: Early spring through late fall
Fun Facts: Drone flies almost perfectly imitate bees, which can dissuade hungry predators. They have furry yellow and black bodies and mimic the flight patterns of bees, but have two wings while bees have four. Around the world, other species of drone fly pollinate coffee, chocolate and bananas.
Conservation Status: Not assessed, IUCN Red List 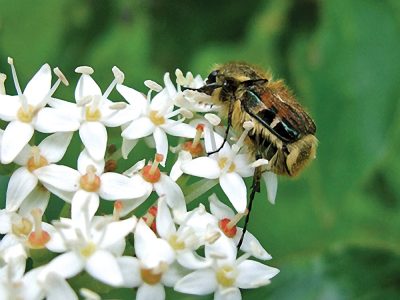 (Trichiotinus piger)
Range: Throughout the Eastern United States
Habitat: Open areas with flowers near woodlands
Identification: This beetle has a dark black or brown body with two horizontal pale stripes on each wing. Its upper thorax and abdomen are covered with dense hair which pokes out from beneath the beetle’s wings and collect pollen.
What They Pollinate: Flowers include Queen Anne’s lace, New Jersey tea, hydrangea, dogwood and Indian hemp, also known as hemp dogbane
When: April through August
Fun Facts: Beetles in this genus are known as bee-like flower scarabs because the pollen-collecting capability of the hair on their bodies resembles that of bees.
Conservation Status: Not assessed, IUCN Red List 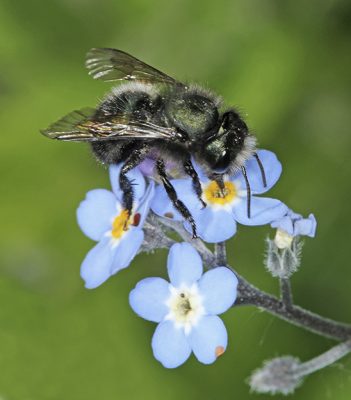 (Osmia lignaria)
Range: Throughout the United States
Habitat: Mason bees live around forest edges and nest in holes within dead wood. They use clay to seal entrances and create partitions between eggs.
Identification: Dark metallic blue in coloring. Males are 9 to 10 millimeters, whereas females are 10 to 11 millimeters.
What They Pollinate: A wide variety of fruit trees and berry bushes, plus flowers in the rose family
When: March through May
Fun Facts: They carry pollen on their bellies, rather than their hind legs, which makes them effective pollinators. It takes 250 to 300 female orchard mason bees to pollinate an acre of orchard. Males are stationed at the entrance to the nest to give the more productive females a better chance of surviving a predatory attack.
Conservation Status: Not assessed, IUCN Red List 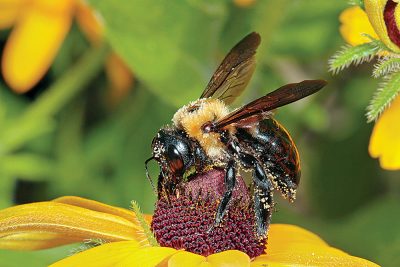 (Xylocopa virginica)
Range: Eastern United States and Southern Canada
Habitat: Females use their jaws to cut deep holes in thick wooden structures. The female will deposit her eggs and some pollen grains for each larvae to eat once it hatches. A male guards the entrance from other males. There are typically one or two generations per hive per year.
Identification: Both males and females have black heads, a thorax with short yellow hairs and a bald spot in the center, and an abdomen that is glossy, black and hairless.
What They Pollinate: Flowers and vegetables such as eggplants and tomatoes. This bee is a generalist, meaning it can pollinate multiple species.
When: March to August, hibernates in winter
Fun Facts: The Eastern carpenter bee performs buzz pollination and is known to steal nectar for food without pollinating the plant. These bees are solitary and do not form colonies.
Conservation Status: Not assessed, IUCN Red List 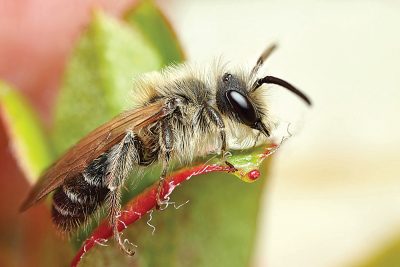 (Andrena cornelli)
Range: Eastern United States
Habitat: In early spring, females dig holes in dry soil to store pollen and eggs and may reuse these nests. The young remain in the nest until they emerge as adult bees the next spring.
Identification: Distinguished by its dark coloring, slender body and widely spaced hairs on hind leg.
What They Pollinate: Azalea flowers and other species of rhododendron
When: March to September, most active between April and May
Fun Facts: Azalea miner bees are not aggressive, and they, along with other ground-nesting miner bees, are among the first bees to emerge in the spring
Conservation Status: Not assessed, IUCN Red List 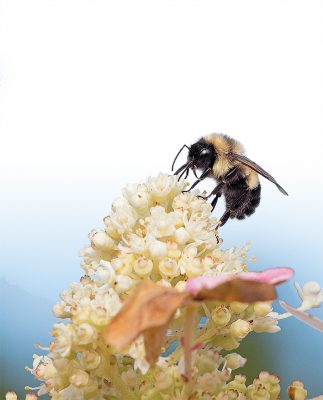 (Bombus affinis)
Range: Historically in the Upper Midwest and Eastern North America, their range has declined by an estimated 87 percent recently. Currently the species may be present in the Midwest, Northern Virginia and West Virginia.
Habitat: Near or within woodlands. Typically resides in abandoned rodent nests located one to four feet underground.
Identification: Worker and male bees have a distinctive patch on their yellow abdomen — queens do not. All other abdomen segments are black.
What They Pollinate: Cranberry, tomato and pepper plants, among others
When: March to October, most active May through August
Fun Facts: They perform buzz pollination and typically pollinate within one kilometer of their nest.
Conservation Status: Endangered Species, U.S. Fish and Wildlife Service; Critically Endangered, IUCN Red List