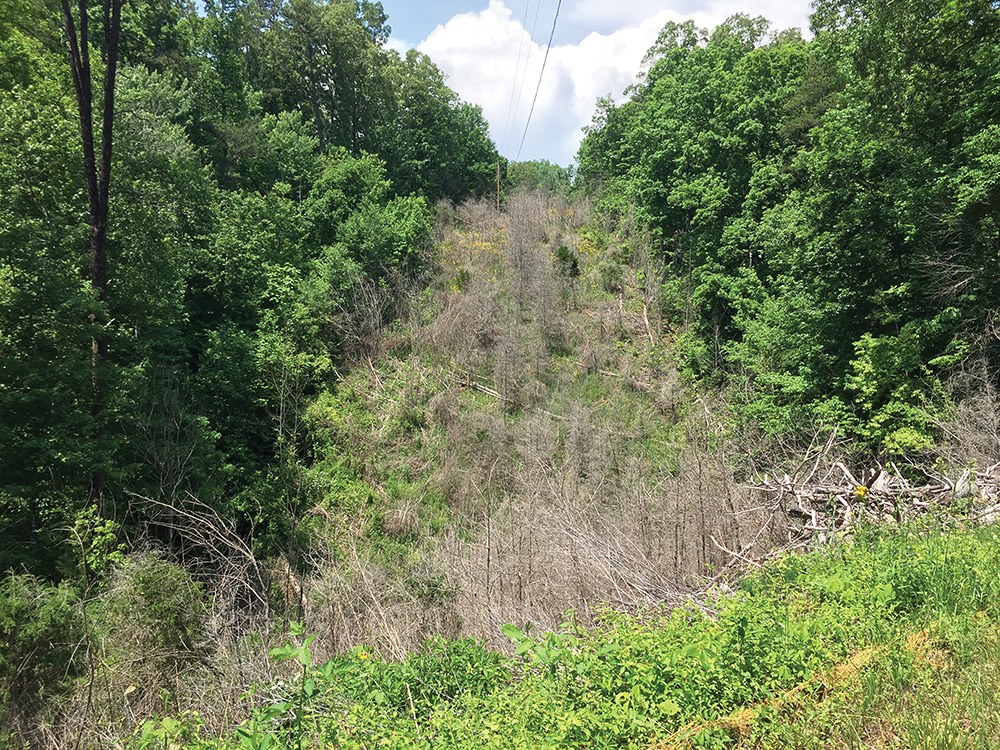 Lynn and Tim Tobey’s property in Sharps Chapel, Tenn., was sprayed by Powell Valley Electric Cooperative in 2017 and photographed here in May 2018.

Residents in Claiborne and Union counties in Tennessee, were taken by surprise when strangers showed up in their yards and began spraying chemicals under their power lines in 2016 and 2017. Shortly after, crops, bees and even pets began dying — and community members began experiencing a myriad of health issues.

Herbicides can have harmful effects on people and pollinators. Glyphosate, for example, a chemical used by PVEC and found in the herbicides Roundup and Rodeo, is one of many herbicides proven to negatively impact bees’ health and behavior.

In response to the public’s concerns about herbicide impacts on humans and the environment, some utilities are taking steps to manage the chemicals more responsibly — and are beginning by engaging with communities.

According to its website, Powell Valley Electric Cooperative has over 3,500 miles of power lines that serve more than 31,500 member-owners in Northeast Tennessee and Southwest Virginia. Since Powell Valley is an electric cooperative, it is a nonprofit entity and the residents who receive energy from the co-op are also the its members and owners. 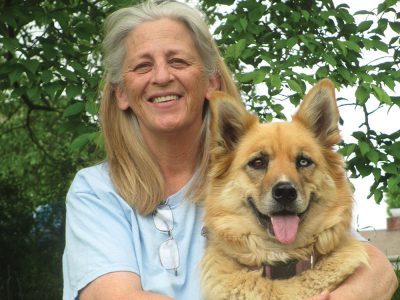 Lisa Strickland, a beekeeper and organic farmer in Harrogate, Tenn., recalls spraying occurring in nearby communities — including Sharps Chapel and Cumberland Gap — in June 2016. The following June, her community was again impacted by spraying that also took place in surrounding areas.

PVEC was not obligated to notify member-owners about when and where herbicide spraying would occur; as a result, many residents had no idea the sprayers were coming.

“I’d been in my garden, and I came in for lunch,” Strickland says. “I went back outside to find strange people popping out from behind my utility building. It literally scared the life out of me.”

Residents reported rashes, high blood pressure and even hospitalization for kidney problems after touching or eating sprayed plants and crops or swimming in nearby bodies of water.

Sharps Chapel resident Mike Shelley told USA Today that soon after he and his dog swam in a nearby lake following the June 2016 spraying, he was hospitalized for unidentified kidney problems, and his dog was euthanized due to kidney failure.

Beekeepers in Claiborne County believe the spraying killed their bees, according to Strickland.

Jay Heselschwerdt, a local beekeeper, told WVLT-8 News that 34 of his 38 hives died after Powell Valley Electric Cooperative sprayed herbicides on his property in 2017, and that he believes the chemicals were the cause.

Rodeo, Method 240SL, Escort SPX, Arsenal and Aqufact were the chemical products sprayed in 2016, according to a list released by Powell Valley staff to USA Today.

Strickland says the chemicals sprayed in 2017 were Arsenal, Roundup Custom, Milestone VM, Garlon 3A and Enhance.

According to research conducted by chemical manufacturers, the majority of the herbicides are “non-hazardous,” but Aqufact, Enhance and Garlon 3A may cause a range of health problems for people and animals.

While Aqufact is listed as “not classified,” its manufacturer warns that the product is highly toxic to aquatic species and may cause birth defects in humans. The manufacturers of Aqufact and Enhance both cite possible respiratory tract, eye and skin irritation, though Enhance is classified as “non-hazardous.”

Garlon 3A is the only chemical listed as “hazardous.” The chemical causes extreme eye irritation and may damage kidneys through prolonged or repeated exposure.

Although scientists may have studied the herbicides’ individual impacts on humans or pollinators, the interaction among combined chemicals has largely gone unresearched.

Multiple herbicides can overwhelm a bee’s defenses. Honeybees use a specific enzyme to detoxify chemicals they ingest. If the enzyme is being used to detoxify one chemical, it may not be able to fully detoxify another, resulting in poisoning, according to BeeAware, an informational organization for beekeepers.

Further, native bees are often smaller and more susceptible to chemicals than honeybees, according to the West Virginia Pollinator Handbook. Even when they don’t die of herbicide and pesticide interaction, the chemicals can affect their reproduction and pollination habits, impacting the overall health of their nests.

The herbicides Rodeo and Roundup are both composed mostly of glyphosate, a broad-spectrum herbicide that kills a variety of weeds. Glyphosate was declared “probably carcinogenic” by the World Health Organization’s International Agency for Research on Cancer in 2015.

The U.S. Environmental Protection Agency lists glyphosate as “practically nontoxic” to honeybees — but other studies indicate it can still have negative health effects on pollinators.

A 2014 study by the University of Buenos Aires found that after exposure to glyphosate — in this case through glyphosate-laced sucrose — honeybees exhibited reduced sensitivity to the scent of sucrose, leading to a decreased ability to find food, and poorer memory and learning performance.

As worker bees struggle to find their way home or locate food, the study suggests this may lead to an increased likelihood of colony collapse disorder, a phenomenon in which a majority of worker bees disappear from the hive and abandon the queen.

Herbicide use is not only widespread in electric cooperatives. In Tennessee, as in other states, highway agencies, railroads and other utilities employ similar herbicide combinations.

When they heard about the herbicide spraying in Powell Valley, members of the neighboring Holston Electric Cooperative decided to increase communication between member-owners and staff in their own co-op.

The Heritage Beekeepers of Hawkins County, a group with members of both Powell Valley and Holston electric cooperatives, initiated the discussion with Holston Electric in August 2017. They asked the the co-op for a policy that would allow concerned residents to opt out of right-of-way herbicide spraying and manage vegetation independently.

Heritage Beekeepers Vice President Becky Johnson says their requests were met within months. An opt-out policy was made available, and Holston Electric announced in a news release that employees would visit members’ homes and hang door knockers indicating what areas would be treated.

There are still problems to overcome, according to Johnson. Holston Electric primarily informs member-owners about spraying schedules via Facebook, a channel not all residents have access to. Johnson also stated that Holston was reluctant to discuss details of their spraying practices during conversations with Heritage Beekeepers representatives and the state apiarist.

Nonetheless, member-owners’ communication with the cooperative was an important step for humans and bees alike, according to Johnson.

“It’s about time that people stand up for their rights and their animals’ rights to be paid a voice,” Johnson says. “The bees are a link to everything, they’re linked to the plants that grow, to other forms of wildlife and livestock, to the obvious honey. They help connect so many different aspects of our everyday life.”

With public concern about chemical use on the rise, Powell Valley and Holston Electric aren’t the only utilities in Appalachia whose customers are sparking conversation about protecting pollinators.

In French Broad Electric Cooperative, which serves seven counties in North Carolina and Tennessee, beekeeper and member-owner Rachell Skerlec said she has heard complaints in her community about over-spraying. 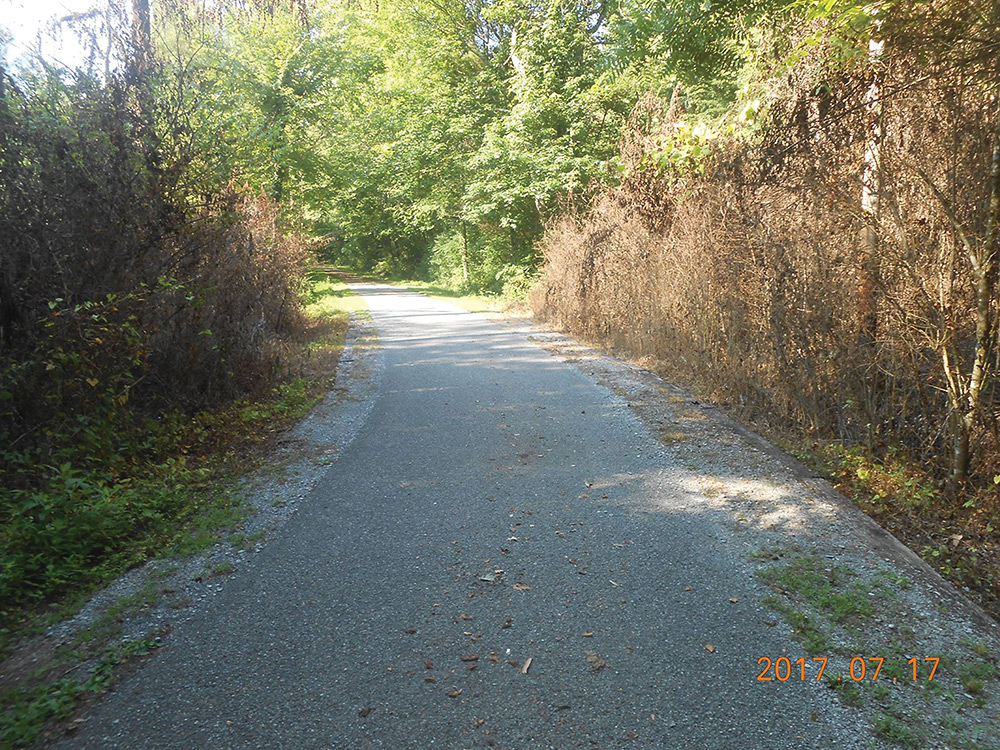 “People definitely are concerned about if it will turn up in waterways, if it’ll linger in the environment,” Skerlec says. “I am a beekeeper and people in the beekeeping club are concerned it might contribute to honeybee losses.”

Skerlec has been a beekeeper for 10 years, and experienced almost no annual bee losses in her four years in Cape Coral, Fla. But in the six years she has lived in North Carolina, Skerlec has seen bee losses every winter but 2017 to 2018.

According to Skerlec, she started opting out of pesticide use in spring 2015, just before she got goats to maintain the co-op’s right-of-way on her property naturally. Despite concerns about the use of chemicals, Skerlec says she also understands the difficulties French Broad Electric faces with vegetation management.

“This area is mostly mountainous and wooded, and they were explaining to me that it’s a real challenge to keep that power reliably supplied,” Skerlec says. “It’s so important to have those right-of-ways maintained so if something goes wrong, they can very quickly access what they need to access to get power to the people. When they explained the amount of time and money it would take trying to do this area with just manpower versus chemicals, they very quickly painted me a picture that made me realize the scale of the challenge they’re up against.”

Skerlec describes French Broad as respectful and communicative, and noted that she feels comfortable coming to them if problems arise in the future. French Broad Electric Cooperative did not respond to multiple phone calls.

This year, Powell Valley Electric Cooperative is working on opening up communication, according to Assistant Manager Bo Goodin and Director of Apparatus Maintenance Travis Tolliver.

Like the Holston and French Broad electric cooperatives, in early 2018 Powell Valley instituted an herbicide opt-out policy after consulting with a small group of member-owners.

According to Lisa Strickland, who was involved in the meeting, the member-owners worked with the cooperative to write and implement the opt-out policy as well as notification procedures for the general public and specifically for beekeepers. The group also encouraged Powell Valley to upgrade its website.

Since then, Powell Valley has included spraying schedules on their website, in their community magazine and twice in their bills: one general notification about the upcoming spraying season followed by specific information about spraying times in certain areas, according to Tolliver.

“We try to notify every beekeeper in our system,” Goodin says. “We talk to some of the people who are in organizations like beekeepers’ clubs, and we notify those especially prior to herbicide treatments. They’ve been very receptive to work with. They’re working with us, and we’re trying to work with them just as well.”

Moving forward, Strickland says she hopes to continue discussion with Powell Valley and encourage them to hire a right-of-way supervisor who is versed in forestry and environmental science so this problem is not repeated for a third consecutive year.