Purple Martins: The Neighbors We Didn’t Know We Wanted 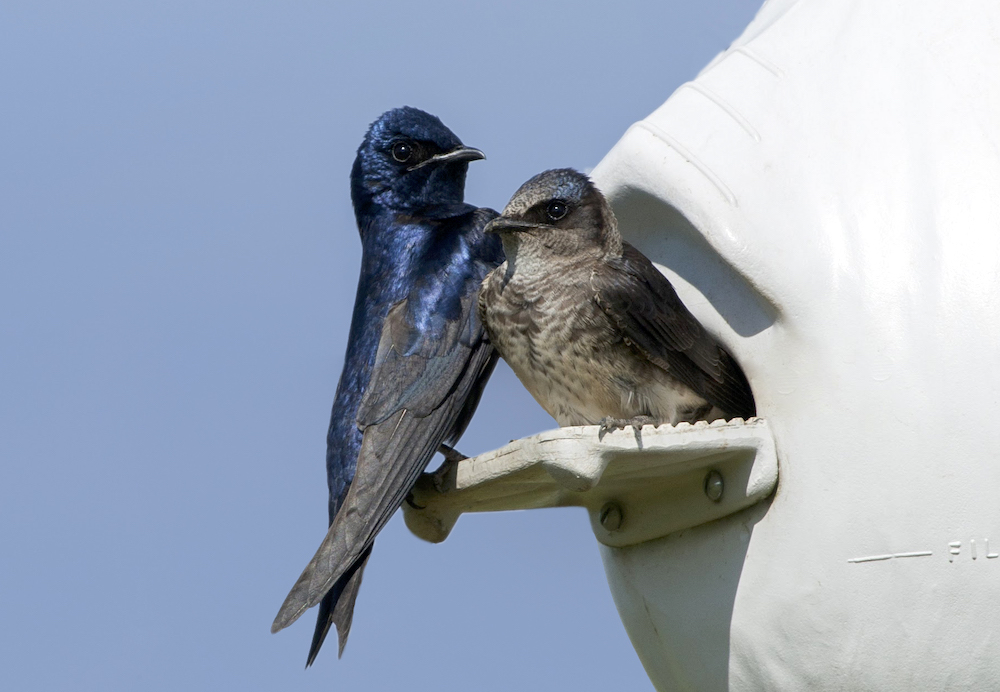 An adult pair of purple martins. The species is almost completely reliant on human-made housing while it resides in North America. Photo courtesy of Purple Martin Conservation Association

On a warm and sunny spring afternoon, the Kyker Bottoms Refuge outside of Knoxville, Tennessee, is alive with the calls and chirps of a purple martin colony as the birds feed, mate and raise their young.

Bird enthusiasts up and down the East Coast eagerly await the period from early to late spring, when purple martins arrive back home after spending the winter in the southern tropics.

The martins, named after the iridescent purple color of the adult male’s feathers, migrate several thousand miles back and forth from North to South America every year. Despite only weighing between 1.6 to 2.1 ounces and measuring about 7.5 inches long, the birds travel an average of 200 miles per day.

When they arrive back on the East Coast, martins return to the same colonies year after year. But unlike most birds, these swallows don’t return to natural nests in trees; they live almost exclusively in human-made housing. These homes are traditionally made of hollowed-out gourds hung from poles. 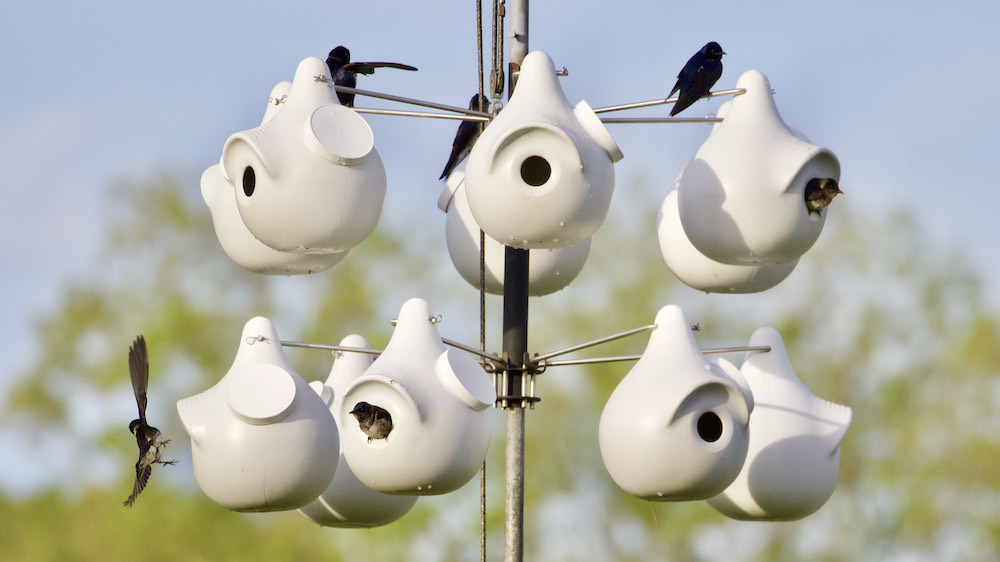 Ideal purple martin habitats, such as the Kyker Bottoms Refuge, have plenty of open area near a body of water, with bountiful insect life that the birds depend on as their primary food source, according to Tom Howe, former president of the Knoxville chapter of the Tennessee Ornithological Society.

Before their reliance on humans for housing, purple martins lived in cavities in trees formed from woodpeckers or rock ledges.

The behavioral shift from living in natural cavities to human-made housing is rooted in Native American history. Tribes including the Choctaw and Chickasaw hung gourds on top of poles for purple martins to live in near their villages. This worked in both the people’s and the birds’ favors, as the birds provided Native Americans with insect control, while the proximity to Native American villages provided the martins with protection from predators such as owls and snakes.

The North American arrival of two European bird species, English house sparrows and European starlings, accelerated the martins’ transition to human-made housing. The invasive birds arrived in New York in 1851 and 1890, respectively, and these two aggressive species took over colonies when purple martins migrated south every year. The sparrows and starlings attacked the martins when they arrived back the following years. 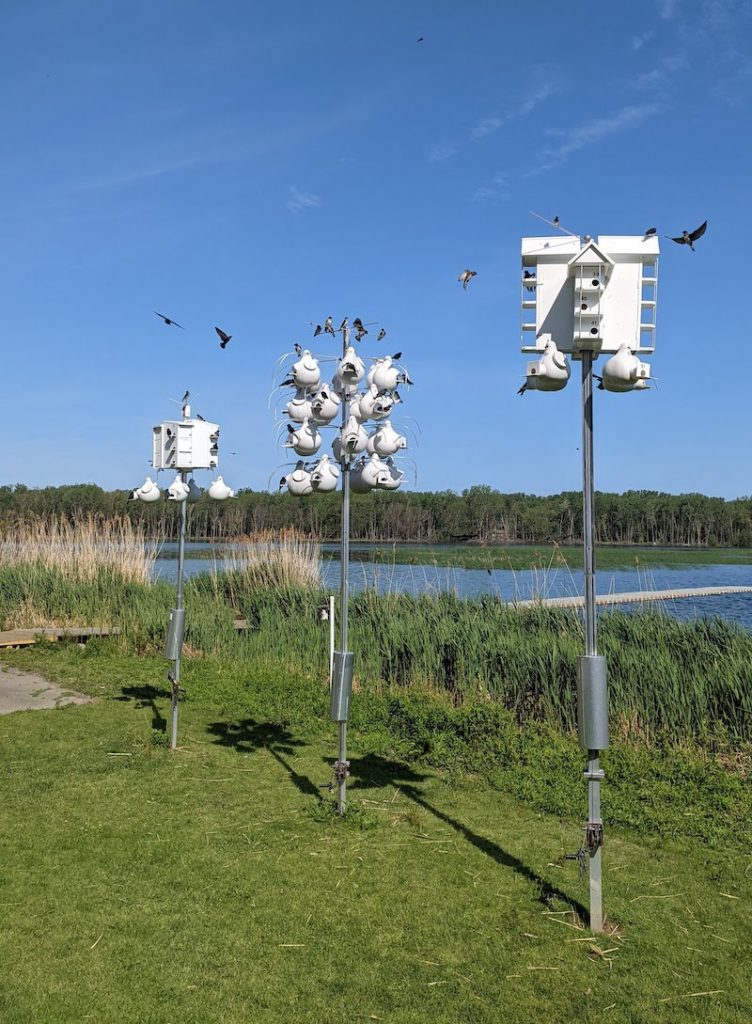 Courtney Rousseau, president of the North Carolina Purple Martin Society, a nonprofit organization created for the preservation of purple martins, said that Indigenous peoples were the ones to encourage martins to start relying on man-made housing.

“We should definitely give [Native Americans] the credit for encouraging the species and bringing this species to our attention to begin with,” she says.

When Europeans colonized North America, they adopted the same practice, which has continued into the present day.

Though the purple martin is not endangered and is common in the Southeast, their population has decreased by almost 40% since 1966. With each passing year, building purple martin homes becomes increasingly necessary for this unique species’ survival.

Some people, such as landscaper Tom Brake in Abingdon, Virginia, have found alternative housing methods for purple martins.

After starting his purple martin colony in 1996 and building it up to about 70 nesting pairs of birds, Brake found that those population numbers were decreasing. He discovered that owls were getting into his gourds and redesigned his homes, eventually creating a product called ChirpyNest that he has sold now for several years.

In addition to the slanted design of the homes to help protect the martins from owls, the houses have built-in ventilation systems and nests raised above the floor to prevent stagnant air and wet nests. 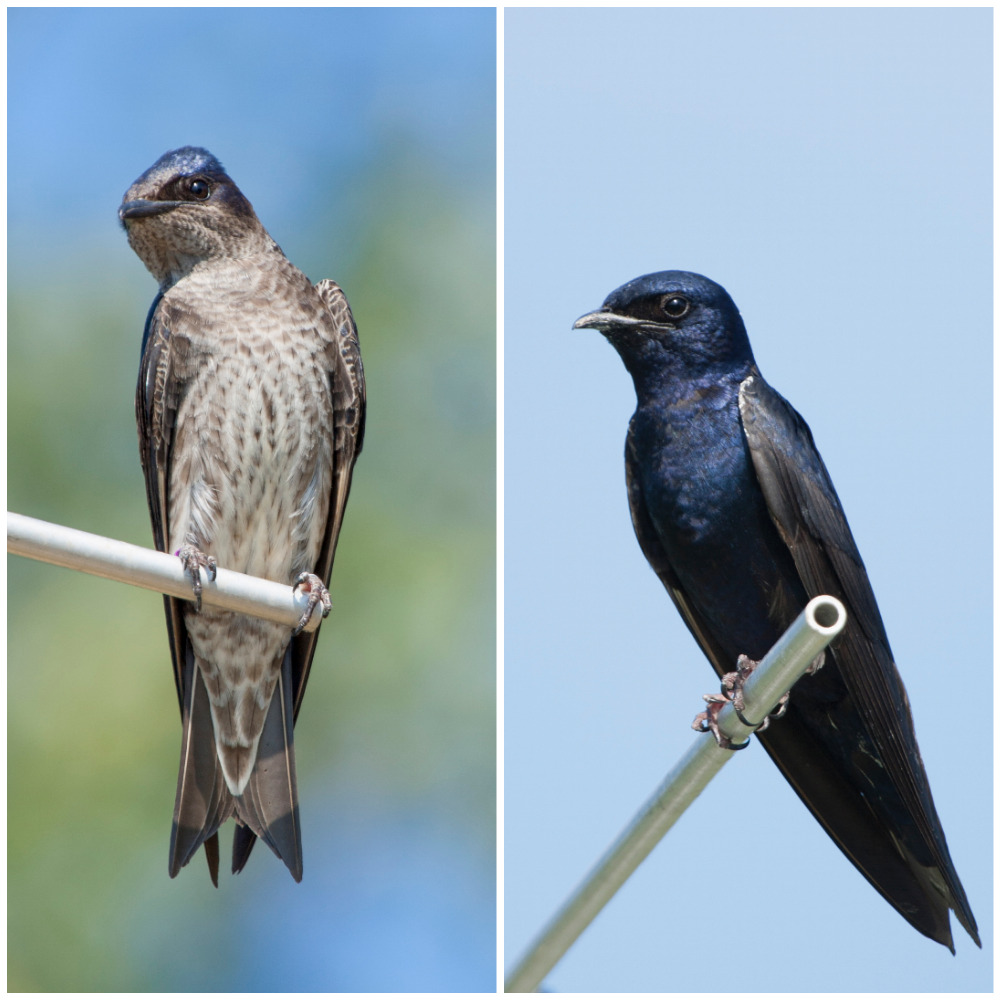 A common misconception of purple martins is that they eat mosquitoes, which is not true, though Brake explains that martins do eat and control the populations of many other insect species, including butterflies, flying ants and dragonflies.

“Each person develops a passion for them for different reasons, but I love the music,” says Brake. “They sing, I call it music. There’s just a lot of activity around a purple martin colony. It’s invigorating.”

Though there are purple martins found on the West Coast and in southern Canada, the majority of the birds are located in the Eastern United States during the summer breeding months. At the end of their breeding season, the martins will migrate from the United States and spread out across 11 South American countries, ranging from Colombia and Venezuela in the north to Argentina in the south. Brazil is the birds’ primary destination.

Until 2007, the only way to track purple martin migration patterns was through leg banding, which only showed scientists the birds’ final destinations in North and South America. However, this changed when the Purple Martin Conservation Association, a nonprofit organization and leader in purple martin research and conservation, began using geolocators, which track exact migratory patterns and provide much more in-depth information about these birds’ habits, including speed of travel, specific habitat selections and activity levels.

Purple Martin Conservation Association President Joe Siegrist stated that the geolocators have also provided insight into climate change-related factors contributing to the species’ population loss. In Brazil, where purple martins spend much of their time, hydroelectric dams in the Amazon River have flooded out many of the birds’ preferred habitats. Additionally, increased pesticide use in both Brazil and North America have led to declines in insect populations and a lack of available food for the purple martins as a result.

Illegal gold mining in Brazil has led to mercury pollution entering waterways. While this was previously known, Siegrist said the extent of biologically significant mercury levels making its way up the food chain to purple martins was recently discovered by examining their feathers. Mercury toxicity impacts the martins’ migration back north.

“They’ve done their best to fatten up for the migration while they’re down there,” says Siegrist. “But mercury toxicity impacts their body conditions. So if they’re sick because of mercury toxicity, then they may not make it across the Gulf. That’s a long flight for a little bird the size of your hand.”

Siegrist states that the birds’ migration north only takes a week or two, but the trip south is much more relaxed. The birds only want to go farther south than the cold weather, refueling at a leisurely pace and hanging out in the Amazon for months on end.

“Martins east of the Mississippi River are almost completely dependent on man,” says Courtney Rousseau with the N.C. Purple Martin Society. “And without us, they would be gone. And they’re a charismatic species. They’re fun to watch and fun to study. They’re tolerant of human interaction and intervention and they’re just a wonderful, joy-bringing species. There’s no other species like them here.”