Defenders of Coal River Mountain won’t back down 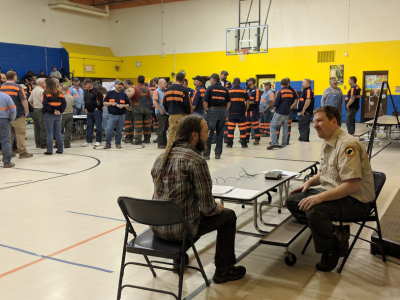 On the evening of Thursday, April 12, the gymnasium of Clear Fork Elementary School in Artie, W.Va., was packed.

The occasion was an “informal conference” requested by local environmental justice organization Coal River Mountain Watch regarding Alpha Natural Resources’ plans to forgo reclamation on the nearly 300-acre Collins Fork mountaintop removal (MTR) mine and instead use the flattened mountain as a tire dump and staging area for fuel, coal and equipment related to adjacent mines.

This operation, officially called the Collins Fork Remediation Project, was first permitted in October 2011. At that time, Alpha claimed that the mine would benefit the environment by filling up an old, dried-out coal slurry pond with solid waste from the mining operation. The same regulators that approved this “remediation project” are now poised to grant two variances to the permit requested by Alpha. One variance will allow Republic Energy, the Alpha subsidiary operating this mine and holding a total of more than 6,000 acres of MTR permits on Coal River Mountain, to suspend standards and deadlines for reclamation on the site. The other will allow Republic to dump tires on the unreclaimed area directly above the communities of Workman’s Creek and McDowell Branch.

“The fact that the coal industry gets away with calling a surface mine a ’remediation project’ is a clear example of the complacent nature of our state regulatory agencies,” said Junior Walk of Coal River Mountain Watch. “It’s no secret to folks who live near mining operations that the main function of the [West Virginia Department of Environmental Protection] is to provide legal and public relations cover for the activities of the coal industry.”

A half dozen or so representatives of Coal River Mountain Watch, the Ohio Valley Environmental Coalition, Appalachian Voices and others opposed to the mine were present at the public hearing, but the vast majority of attendees — easily more than 100 people — were there to express their support for the strip mine-tire dump.

Hoards of coal industry supporters donning the matching orange stripes commonly worn by miners on the job site used to be common at hearings of this sort. Coal mining certainly has defenders no matter the environmental and public health costs. In recent years, however, there has been a growing understanding, even among many who are or were employed by the mines, that coal’s heyday is drawing down and it’s high time to chart a new economic path for Appalachia. This has been apparent in the relative lack of industry defenders at other recent public hearings concerning mines in Virginia, West Virginia, Kentucky and Tennessee.

So why did so many turn out to this particular hearing? Could it be that these masses are fervent supporters of tire dumps perched atop steep slopes above quiet mountain communities? This seems unlikely. It is more plausible that Alpha made a push to mobilize its people due to fear of the effectiveness and persistence of local residents and their supporters who are monitoring mining in the area and providing information to state regulators to hold the company accountable for the many adverse and illegal impacts of its operations.

In little more than four years, the DEP has issued notices of violation to the Collins Fork mine for everything from haul road maintenance failures to not properly notifying nearby residents about blasting to utilizing land outside of the permit boundary. Since July 2016, the DEP has issued 11 notices of violation to Republic Energy’s 800-acre Middle Ridge surface mine (adjacent to Collins Fork). On the Middle Ridge mine, a pattern of violations has resulted in a consent order requiring that Republic correct an ongoing pattern of sediment control problems by November 2018 or face possible permit revocation. Many of these enforcement actions were the result of information provided to the DEP by community members.

Despite the mounting evidence that Republic Energy is incapable of mining coal within the confines of the law, at the April 12 hearing DEP officials spoke of the Alpha subsidiary’s proposal to dump tires on the Collins Fork mine as though it were a foregone conclusion. They spoke in terms of “when” this goes through rather than “if,” and seemed reluctant or perhaps incapable of answering questions about the proposal they were there to discuss.

Debbie Jarrell of Coal River Mountain Watch asked one agency representative which DEP officer was in charge of overseeing this permit. “That’s a simple question but they just acted like I was stupid and said, ‘I don’t know what you’re talking about,’” Jarrell said.

The DEP is expected to announce its approval of the plan within 30 days. In the meanwhile, Republic Energy continues to blast, remove coal and rack up violations on the Collins Fork and Middle Ridge mines, all the while advancing toward the Eagle 2 permit, an as-of-yet unstarted mine encompassing an astounding 2,000 acres. 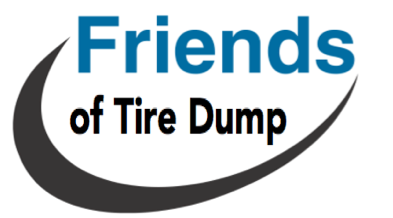 Coal River Mountain Watch has challenged the legality of Eagle 2 in a federal court due to Republic Energy’s inability to comply with simple administrative deadlines. In January 2017, that legal challenge resulted in a judge ordering the federal Office of Surface Mining Reclamation and Enforcement (OSMRE) to reconsider the validity of the permit. Unfortunately, the judge did not set a deadline for this action, asking only that it be done “expeditiously.” More than a year later, there is no sign that Trump’s OSMRE intends to comply with the court order any time soon.

The deck is certainly still stacked in favor of the coal industry and against the land, water, and people of Appalachia. But this sad state of affairs has never dissuaded Coal River Mountain Watch from challenging coal companies and the agencies that enable them before, and they don’t plan on backing down now.

And as Junior Walk added, “My life’s work is dedicated to stopping the mines from exploiting our communities,” said Junior Walk.