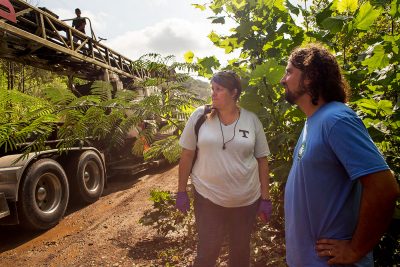 Kopper Glo Mining — a company that was issued at least 17 notices of violation over the past three years — is moving forward with a nearly 1,500-acre mountaintop removal coal mine on Cooper Ridge in Claiborne County, Tenn.

The proposed mine site lies in the Clear Fork Valley near the Tackett Creek Wildlife Management Area. The permit boundary sits a half-mile behind Clairfield Elementary School, presenting health and safety concerns for students and teachers. The mine also surrounds the historic and still-in-use Hatfield Cemetery.

Kopper Glo cleared initial regulatory hurdles this past spring. Now the company is seeking a Phase II permit required under the Clean Water Act for discharging pollutants into public waterways. The second phase allows the company to release higher levels of pollutants than allowable under the Phase I permit.

Opponents of the mine — including Appalachian Voices, the publisher of this paper — have stated that by issuing two separate phases of pollution permits, the Tennessee Department of Environment and Conservation is unable to account for the mine’s full impact. On Sept. 20, TDEC held a public hearing in Caryville, Tenn., regarding the Phase II permit. More than 20 people attended, with 14 speaking against the granting the permit and none in favor.

Tonia Brookman was among the attendees who spoke to TDEC officials. She noted that over 21 years of working in the Clairfield area, she has seen the negative impacts of logging and strip mining.

“People talk about how they once were able to collect water from the rivers and the springs but can no longer; they talk about what it was like to fish and swim in the rivers but no longer,” Brookman stated. “I have heard so many times that the land and water will be put back the way they found it or even better, but what I have seen are mountains that are no longer and the hardwood forest become scrubby pine.”

Other speakers asked regulators to consider the cumulative water quality impacts of this mine when compounded with existing and proposed mines in the Clear Fork watershed, and expressed concern about the characterisation of this operation as a “re-mining” project that would reclaim and improve previously mined areas, when only one-third of the permitted area has been impacted by older strip mines.

“All the advocates for our mountains were quite well-grounded, both morally and factually,” says Jim Steitz, who traveled from Gatlinburg, Tenn., to attend the hearing. He noted that while the economy in his area is built around mountain tourism, residents of Claiborne County were being asked to sacrifice their mountains and their health.