“The scientific evidence of the severe environmental and human impacts from mountaintop removal is strong and irrefutable.” — Margaret Palmer of the University of Maryland Center for Environmental Science 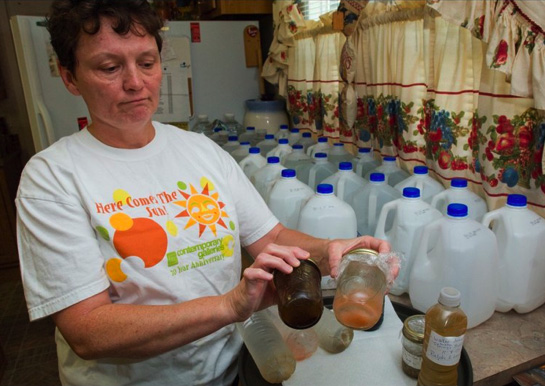 Since 2007, peer-reviewed studies by researchers from more than a dozen universities have concluded that mountaintop removal coal mining contributes to significantly higher rates of birth defects, cancer, cardiovascular and respiratory diseases among individuals living in the region where it occurs.

In 2014, researchers demonstrated that toxic dust from mountaintop removal promotes the growth of lung cancer cells in people living nearby. It is the first time a direct link has been established, rather than a correlation, thereby supporting the previous science that mountaintop removal is harmful to human health. 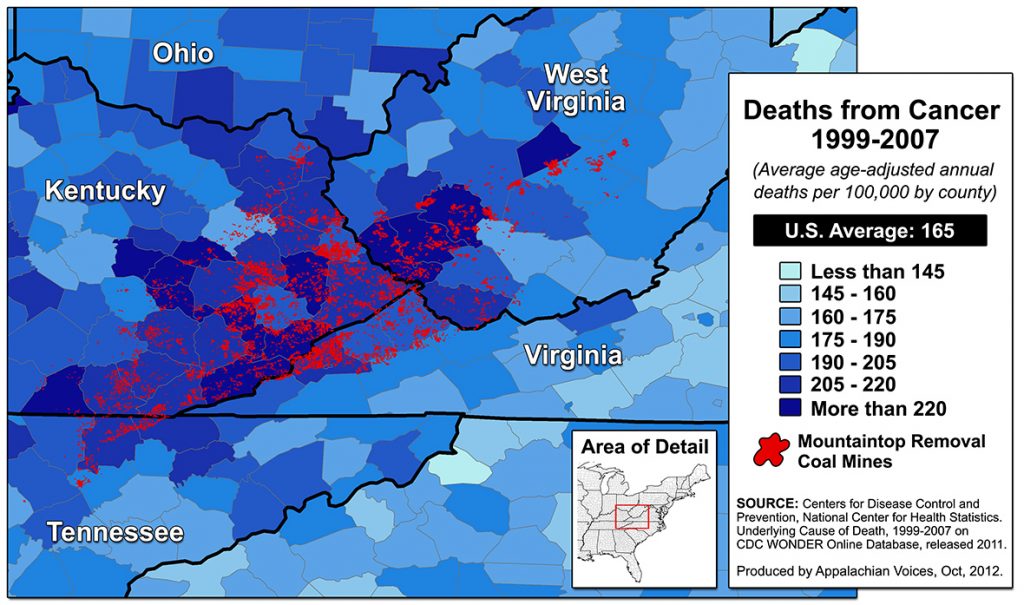 Compared to the national average, the communities of Appalachia where mountaintop removal coal mining is most prevalent have seen staggering rates of cancer diagnoses in recent years.

In 2010, researchers used a geographical information system (GIS) analysis to determine how cancer mortalities in West Virginia relate to proximity to coal-mining activities including mines, coal slurry disposal sites, and processing plants. The data revealed that proximity to mountaintop removal, more than any other coal-mining activity, significantly increases health risks [2]. 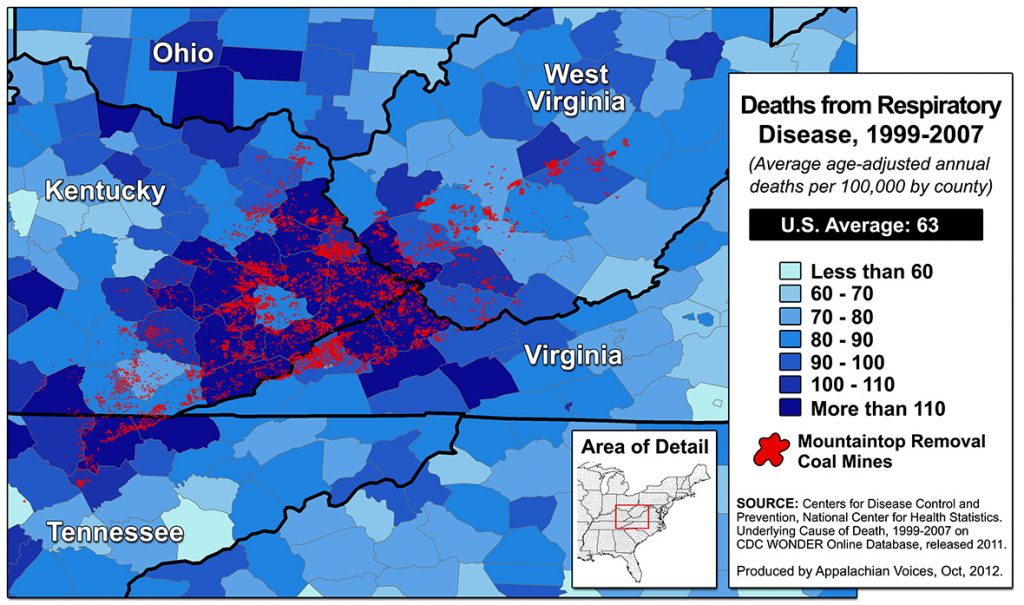 Average age adjusted number of annual deaths from respiratory disease from 1999 to 2007 showing that counties with mountaintop removal typically have much higher rates of death per 100,000 than the United States average

An analysis published in the international journal Lung Cancer found that the most heavily mined areas of Appalachia were associated with higher incidences of respiratory disease diagnoses and lung cancer mortalities [3]. This link was not isolated to miners working directly with toxic substances; evidence of respiratory disease could be found throughout the overall population of Appalachian communities in close proximity to mountaintop removal sites.

“There hasn’t been a direct link between environmental data and human data until this study,” said Dr. Michael Hendryx a co-author of the West Virginia University study. “Previous studies … have been criticized for being only correlational studies of illness in mining communities, and with this study we have solid evidence that mining dust collected from residential communities causes cancerous human lung cell changes.”

Read about the effort to protect Black Lung Benefits for miners 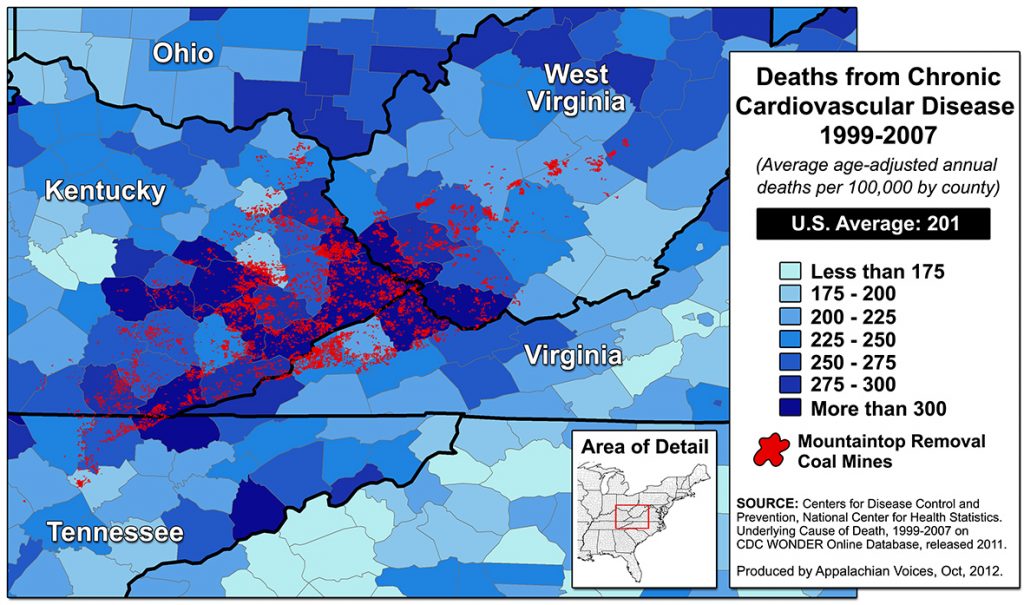 Chart of average age-adjusted number of annual deaths per 100,000 due to chronic cardiovascular disease from 1997 to 2007 showing that nearly all counties with mountaintop removal mining are above the national average (click image for full size).

A primary link between these types of deaths and coal activities appears to be the air pollution associated with mountaintop removal mining. Air pollution is well-documented risk factor for cardiovascular disease and heart attacks. Over time, breathing particulate matter, or dust, caused largely by the blasting apart of mountaintops, can lead to the formation of plaque and inflammation, and can increase the risk of high blood pressure, atherosclerosis, and heart attacks. These risks are more severe in populations with high rates of diabetes, obesity and tobacco use [5]. 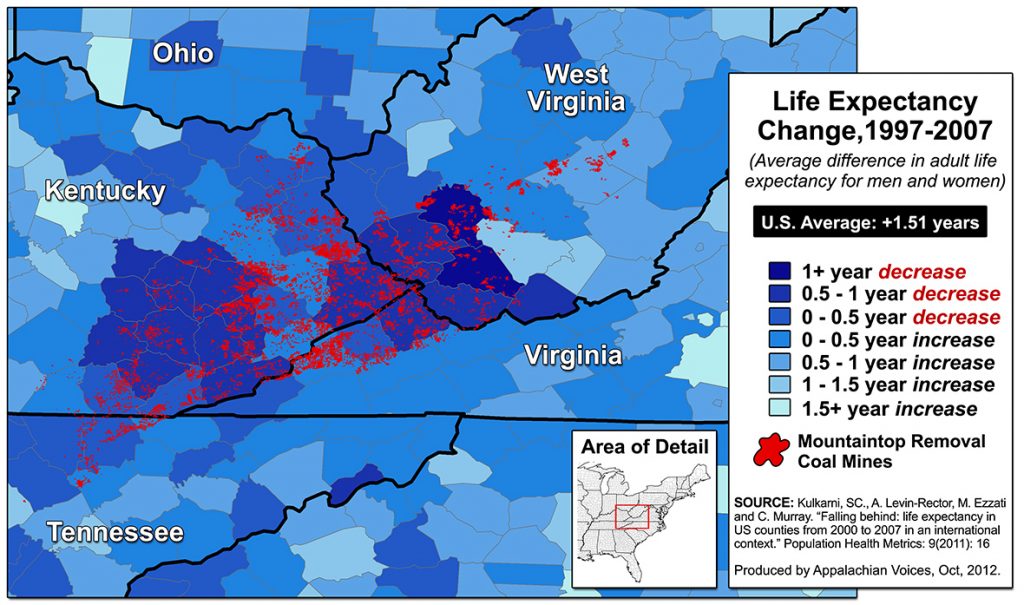 Partially due to the health risks associated with mountaintop removal, life expectancy and the number of preventable deaths in parts of Appalachia are some of the worst in the nation.

Of the 3,147 counties in the U.S., the two largest coal-producing counties in Kentucky — Perry County and Pike County — were among the bottom ten for life expectancy between 1997 and 2007, according to a 2011 study published in Population Health Metrics. Counties in coal-producing southern West Virginia, including McDowell, Logan and Mingo, also ranked among the lowest 1 percent in the nation for life expectancy, while surrounding counties are all in the bottom 10 percent [6].

Heavily strip-mined communities in Appalachia are among the unhealthiest in the U.S. In 2013, the Gallup-Healthways Well-Being Index ranked Kentucky and West Virginia — the two states where mountaintop removal is most prevalent — second to last, and dead last in citizens’ overall health and happiness. Ranking by congressional districts shows similar results: out of 434 districts nationwide, those where mountaintop removal is most pervasive — W.Va-03 and Ky-05 –ranked 433 and 434, respectively.

As a result of poor health and oppressive living conditions, including a rough economy, Central Appalachia has consistently lost population due to attrition. While the average population of U.S. counties increased by 36.3 percent between 1980 and 2010, more than half of the counties in the affected region lost population, including McDowell County in West Virginia, which lost 56 percent of its population, falling from 49,747 to 22,113. 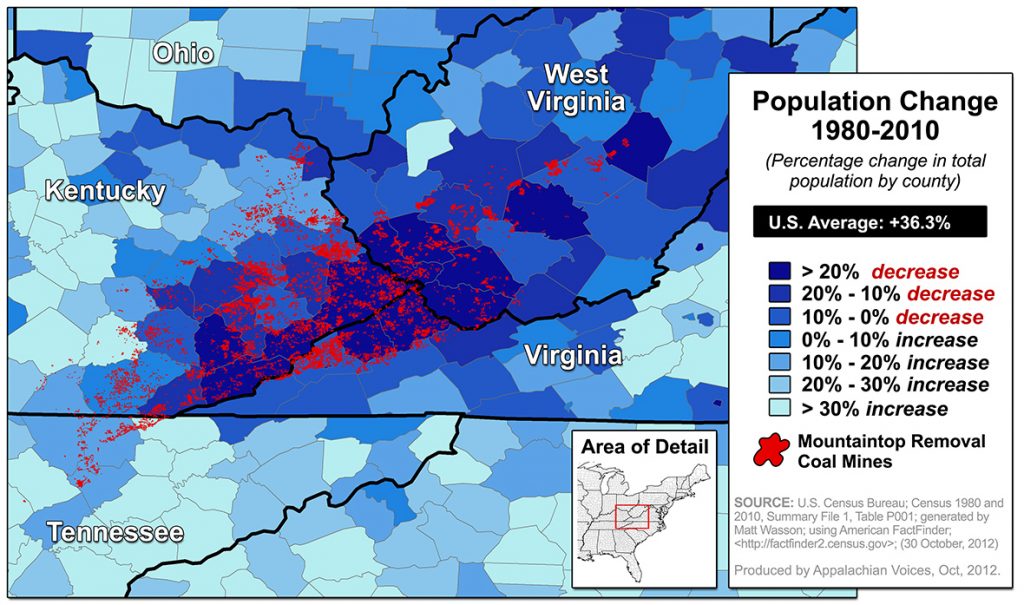