Last summer, the U.S. Department of the Interior canceled a review of the human health impacts of mountaintop removal coal mining that was already well underway. Led by the National Academy of Science (NAS), the project began in 2016 in response to citizen pressure and a request from the West Virginia Department of Environmental Protection.

In response to West Virginia’s request, the Office of Surface Mining Reclamation and Enforcement, then under the Obama administration, commissioned the NAS to conduct the $1 million review of existing research linking mountaintop removal to health disparities including increased deaths from cancer and heart and respiratory diseases.

When the Interior Department halted the review, the department claimed it was done as part of an internal assessment of grants and cooperative agreements with a cost of more than $100,000. It was initially unclear whether the move was temporary. At the time, the mountaintop removal study was the only projected ordered to stop but four months later the department also halted a study on offshore drilling safety being conducted by the NAS. 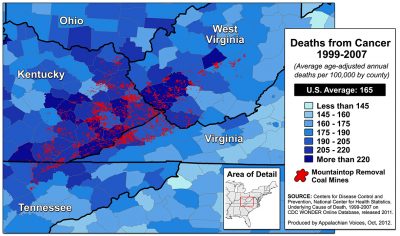 In January, Rep. Raul Grijalva (D-Ariz.) wrote a letter to the inspector general of the Interior Department asking her to investigate the cancellation of both studies. Rep. Grijalva had already contacted Interior Secretary Ryan Zinke to determine the fate of the $400,000 left unspent for the mountaintop removal research review; funding appropriated by the 2016 federal budget had already been committed to the NAS. Three months later, Secretary Zinke has not provided an answer.

Now the NAS is pursuing private funding to continue the review. NAS spokesperson Riya Anandwala told Louisville Public Media that “given how important the study is to the citizens in the communities surrounding these surface mining sites in Appalachia, the National Academies believe the study should be completed, and are exploring options to do so.”

This study is important to those living near mountaintop removal, but decades of research already make a strong case that health impacts are a very real consequence for nearby residents. That such a review was finally commissioned by the federal Office of Surface Mining at the request of a state mining agency is perhaps just as important as the review itself.

Moving forward, communities impacted by coal mining need to see that the agency is taking meaningful steps to protect public health. But more than a year into the Trump administration, a director for the Office of Surface Mining has yet to be confirmed. It’s unlikely that Trump’s pro-coal pick, Steve Gardner, who has written that mountaintop removal “epitomizes the concept of Sustainable Development” and referred to the practice as “accelerated erosion,” will reinstate the review.