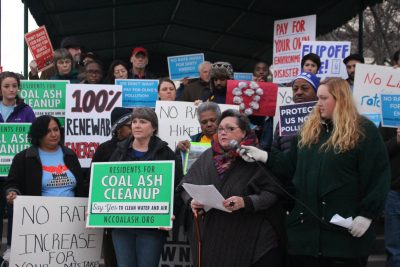 Citizens rally against a rate hike proposed by Duke Energy to cover the costs of cleaning up coal ash.

The struggle to hold Duke Energy accountable for coal ash cleanup came to a head on Feb. 23 when the North Carolina Utilities Commission ruled that Duke Energy Progress can increase its per-kilowatt electricity prices as well as increase the mandatory fee, or base fee, to simply connect to its grid. This decision comes despite the strong opposition from more than 850 individuals and 50 social and environmental justice organizations such as the NAACP, AARP, NC Justice Center, NC Council of Churches, Sierra Club and others who came out to the five rate hike public hearings held last October.

The commission will allow Duke to raise customers’ fixed monthly charges by 25 percent, going from a fixed rate of $11.13 to $14 before they even turn on a light switch. This rate increase is, in part, an effort to recover $232 million Duke spent on coal ash cleanup. With the increase to the per-kilowatt hour (the rates tied to electricity usage) and the mandatory grid access fee, Duke Energy Progress customers will pay about $6 more per month for their electricity starting in March. This unacceptable maneuver effectively shifts the burden of the cost of cleaning up coal ash onto many families who are already struggling to stay afloat.

Advocates agree that any increase in prices that disproportionately impact the most vulnerable is a major concern. This particular rate increase plan, however, is more concerning for fixed and low-income individuals because it increases the base fee. With a base fee increase, people are unable to offset their bills going up by adjusting the thermostat or making energy efficiency improvements.

Southern Environmental Law Center Senior Attorney Gudrun Thompson stated there were more than 1.4 million Duke customers who are struggling to pay their bills and many of the 250 residents who testified against the rate hike expressed struggles related to job insecurity, poverty and fixed incomes.

Thousands of AARP further solidified this fact by signing a petition urging the Commission against increasing prices on the basis that members could not afford for their bills to increase. Richie Johnson, who supplied testimony at the rate hike hearing in Charlotte, stated that “There is no way with Social Security I can afford [the rate hike]. That’s a loaf of bread, a dozen of eggs, and a bottle of milk.”

Another dissenter was North Carolina Rep. Kevin Corbin. He agreed, stating that the utility increase is too much at one time and too much for our region. With no regard for the gravity of the rate hike opposition, the commission still granted approval for rate hikes on the grounds that the costs are “reasonable and prudent, and used and useful in the provision of service to the Company’s customers.”

But opponents are not assured that these decisions were reasonable nor prudent. One testimony from Duke’s own shareholder, Fred Crawford, stated he believes the burden falls on him and other shareholders to pay for the company’s mistakes. After all, it was and continues to be Duke Energy that is responsible for the decisions that led to leaking coal ash impoundments and disasters like the Dan River spill.

If opponents in Duke Energy’s own circle are not enough to prove a rate hike is unreasonable, Duke Energy’s income should speak for itself. The utility earned more than $5.5 billion in revenue in 2016, a 35 percent increase from the previous year. The company will also see profit increases from the Atlantic Coastal Pipeline approval, as well as tax breaks from federal tax reform. All of this calls into question the extent to which Duke truly needed to shift the burden of $232 million to customers who held no responsibility in the companies misguided and dangerous decisions.

The Utilities Commission added insult to injury by giving Duke exactly what it wanted in other aspects of the decision. Although the commission approved less than half of Duke’s initial request for the increasing rates, it failed to protect North Carolinians from the corporate monopoly by allowing it to charge its customers for its coal ash cleanup.

The commission then placed a $30 million “mismanagement penalty” on Duke, a maneuver that should hold Duke accountable for their actions. Those payments will be made through an incremental system rather than being paid at once which only seeks to satisfy the needs of Duke Energy.

The commission is also forcing Duke to contribute $2.5 million to its low-income assistance program, a band-aid for those who are directly disadvantaged with this decision that does not address the core problem that many North Carolinians are unable to pay their electric bill. This tactic is also a recognition from Duke that the thousands of North Carolinians who fall below the poverty line will be the most negatively impacted by this rate increase.

The commision did deny Duke’s request for an additional $129 million for “ongoing costs”, telling Duke that it can return in the future to ask to recover those costs. If these rate hikes hold any precedent, Duke will have no problem milking ratepayers for more funds in the future. Ultimately, the commission continued to satisfy Duke even through penalty process.

All is not lost. Consumer advocates, citizens groups and North Carolina residents will continue to speak out and stand against our utilities’ outdated business model that imperils vulnerable communities.