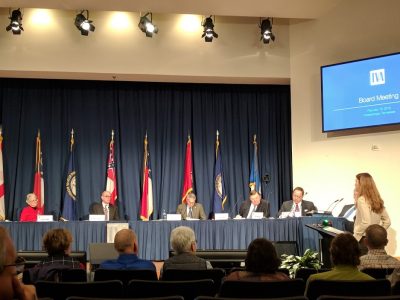 Nearly 40 people attended the Tennessee Valley Authority’s February board meeting to speak out against TVA’s plans to change the way it charges its 154 local power companies.

Many speakers argued that the “New Pricing Paradigm,” as TVA has called it, would result in a disproportionate burden on low-income residents and would thwart future investments in renewable energy and energy efficiency.

The proposed change in TVA’s rate structure would shift more than $1 billion of TVA’s revenues out of energy and demand charges and into a new “grid access fee” charged to local power companies. This fixed charge is not based on the amount of electricity used by customers of the local power company but is instead being described as a way for TVA to ensure recovery of its costs in the face of flat or declining demand for electricity.

TVA claims that this charge will be “revenue neutral,” meaning its wholesale power rate (rate per kilowatt hour) or the amount they charge for demand should be reduced as the new charge is added. But TVA has not explained how either of these charges will be reduced and, in October 2017, TVA actually approved a 1.5 percent increase in the wholesale power rate. Neither of these moves was justified by publicly available studies or data.

TVA also argues the change will “help low-income families who tend to have the highest cost of electricity relative to their income.” However, this type of rate structure often increases costs for low-income families, especially renters and those on fixed incomes. If local power companies were to add TVA’s proposed fixed charge on top of the recently approved rate increase the more than 400,000 families in Tennessee alone, who already spend 20 percent or more of their income on energy costs, could end up having to choose between necessities like food and medicine and paying their electric bills.

Additionally, moving more revenues out of energy rates and into a fixed fee would extend the payback period for customer investments in energy efficiency and renewable energy, reducing the cost-effectiveness of such investments and eroding consumer ability to control energy bills. So the proposed rate structure could stifle investments in renewable energy and energy efficiency, two fast-growing industries that create well-paying jobs and boost local economies. So while there was a time when TVA was a leader in making clean energy investments in the Southeast, the newly proposed rate structure signals a strong shift backward.

Appalachian Voices is recommending that TVA not act on the proposal until the utility studies the potential impacts in greater detail. During her public comments at the February Board meeting, our Tennessee Energy Savings Outreach Coordinator Brianna Knisely called on TVA to “explore other options that achieve a broader set of goals, be transparent with the public about any new proposals, and get back to being a leader in renewable energy, energy efficiency and economic development for the Tennessee Valley.”

A public comment period on the proposal is open through April 9. If the new rate structure is adopted at TVA’s May board meeting, it will be implemented in October 2019.