Committee members also approved an amendment put forward by Rep. Don Beyer (D-Va.) to require projects that receive funding under the bill to spur local economic development — an improvement to an earlier version that concerned Appalachian Voices and our allies. 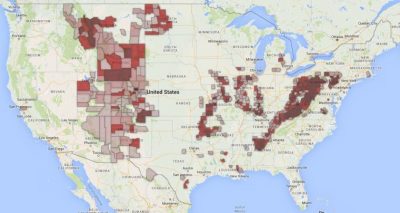 The darker the red, the greater the extend of remaining abandoned mines. Image by The Daily Yonder

While the earlier version still provided money to states to clean up abandoned mines, it would have failed to make the most of every dollar because it did not require projects to include economic development. With the Beyer amendment, the RECLAIM Act is whole again. It will provide money to states and encourage economic projects and community outreach.

The RECLAIM Act passed on a voice vote against the objections of the National Mining Association, which decided to oppose the bill at the last minute. It now goes to the full House for a vote, though we don’t yet have a date for that vote.

A couple points of clarification are needed to help understand the bill:

We’re extremely excited to get as far as we have. Passing a bipartisan bill through the committee is a huge step forward, but there’s still much to be done. Appalachian senators Mitch McConnell (R-Ky.) and Joe Manchin (D-W.Va.) have each introduced versions of the RECLAIM Act in the Senate. We need to get the bill passed on the floor of the House of Representatives and get the Senate to take action. The good news is that, with this week’s victory, we can get all of that done!