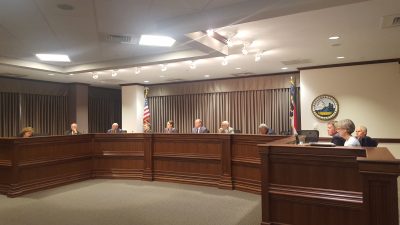 Buncombe County’s Board of Commissioners

Our Energy Savings team has been advocating for the Pay As You Save (PAYS)Ⓡ model of tariffed on-bill financing in Western North Carolina and East Tennessee since 2014, with the goal of reducing energy waste and improving comfort for people living in the many older and inefficient homes in our region. The PAYSⓇ program and similar models have been implemented by 12 electric co-ops in the Southeast, with more programs anticipated in the near future.

Under the proposed program, French Broad EMC would pay the upfront costs of home energy efficiency upgrades, such as insulation, air sealing and more efficient heating and cooling systems. Participating co-op members would use a portion of the resulting savings to repay the co-op through an extra charge on their monthly bills. The program would allow all French Broad EMC customers, including renters and low-income residents, to finance home energy efficiency improvements without taking on personal debt.

Buncombe County follows Mitchell and Yancey counties in passing resolutions to support the co-op’s development of this innovative program. If implemented, the program stands to help thousands of French Broad EMC members pay their energy bills and afford improvements to their homes that may otherwise be difficult to finance. Nearly one in every six households in Buncombe County are living in poverty, and 45 percent of occupied housing is more than 35 years old, according to 2015 U.S. Census data.

In conversations with our staff, French Broad EMC management has stated that they are interested in the program, but must see widespread support from their members and local stakeholders before they will consider providing it as a service. The three North Carolina counties that have adopted supporting resolutions represent 63 percent of the properties receiving electric service from the co-op. Due in large part to our outreach team’s efforts, there are now 22 letters-of-support signed by local service agencies, businesses and faith organizations, and more than 200 member petition signatures. The co-op has a successful on-bill financing program for mini-split heat pumps, but has not implemented a more comprehensive and inclusive energy efficiency financing program.

Although a resolution was proposed at the June meeting of the Madison County Board of Commissioners, the vote on the measure stalled due to a lack of support. Commissioners at this meeting expressed concerns about whether it is their role to tell French Broad EMC what kind of programs they would like to see developed in the community. They also stated concerns about the proposed program’s impacts on the county’s financial security; however, under the PAYSⓇ model, investments for tariffed on-bill financing do not need to be paid for through funds from other utility customers or county funds.

We hope to re-introduce the proposed resolution in Madison County for a future vote and will be working to convince the commissioners that, as local government officials and members of the electric co-op themselves, they have a direct role in supporting programs that stand to improve the lives of their neighbors and the communities they serve.

To learn more about Pay As You SaveⓇ and how you can ask your electric cooperative to provide energy efficiency finance programs, please email lauren@appvoices.org or call (828) 262-1500 and ask to speak to our Energy Savings team.

TAGS: Energy Efficiency Pay As You Save