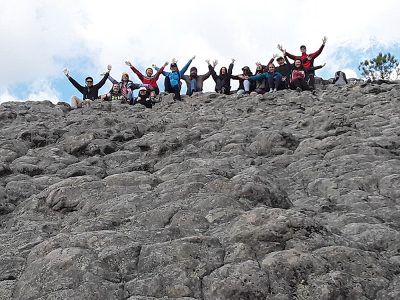 Students from the University of Maryland reach the top of Knobby Rock during a hike with the author on an Alternative Spring Break trip to Harlan County, Ky., this spring. Photo by Dave Cooper

Harlan County, Ky., is home to a stunning old-growth forest preserve. It is also probably the most famous — or notorious — coal-mining county in Appalachia, and was once known as “Bloody Harlan.”


Barbara Kopple’s 1976 Academy Award-winning film, “Harlan County, USA” about the bitter 1973 United Mine Workers of America strike against Duke Power is considered by experts to be one of the greatest documentary films ever made. I have watched it more than 100 times, and it brings tears to my eyes every time. The film features Florence Reece’s haunting song “Which Side Are You On?”

Reece, the wife and daughter of coal miners, wrote the song in the 1930s, when miners and their families were literally starving to death, while the coal companies used violence in their attempt to crush the fledgling National Miners Union. It was a dark time.

Today, Harlan is a peaceful, safe and quiet little place tucked deep in the mountains of Eastern Kentucky. The coal mines are mostly silent, and community leaders are struggling to find new sources of revenue. Fortunately, there are some dedicated souls trying to promote tourism and new ways of thinking. There are even solar panels installed on the roof of the Kentucky Coal Museum.

I have been hosting college student groups in Harlan since 2010 through a program called Alternative Breaks. The students learn about the history of coal mining and Appalachian culture and music, and they do service projects such as planting trees on former strip mines. We also go hiking, and Harlan County is blessed with one of the most beautiful mountains in Kentucky – Pine Mountain.

Pine Mountain is a 120-mile long ridge that runs along the border of Virginia and Kentucky, averaging about 3,000 feet in elevation. Geologic upheaval made coal mining here difficult or impossible, so it is largely unscathed by underground mines or mountaintop removal – unlike nearby Black Mountain.

The 40-mile Little Shepherd Trail runs along the ridgetop from Letcher County to Harlan County, and it is a peaceful one-lane road good for mountain biking, horseback riding or hiking. Kingdom Come State Park has majestic views from the top of Pine Mountain and also offers hiking, overnight camping and a small fishing pond. Though it cannot be climbed, there is also a cool old fire tower on the ridge in the Harlan County community of Putney. And for students of Appalachia, there is a lot of history in Harlan County. 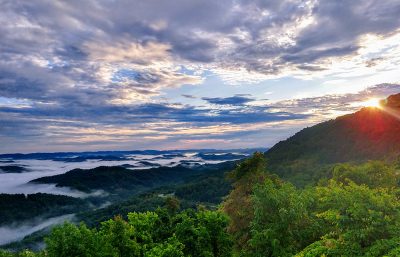 Grover and Oxie Blanton bought land on Pine Mountain just outside Harlan in 1928. They never allowed logging on their land, and passed it down to their daughters with that understanding.

Few areas of old-growth forest remain in Kentucky. Marc Evans of the Kentucky State Nature Preserves Commission noticed the old-growth in 1992. Several years later, the Kentucky Natural Lands Trust was formed to acquire and permanently protect land on the mountain from logging or mining. Pine Mountain is extremely biodiverse, with rare mixed mesophytic forest that contains a vast array of tree species.

Length: Various trails total 4.5 miles
Difficulty: Moderate. No pets or bikes are allowed; trails close at sunset.
Contact: Visit knlt.org/blantonn or call the land trust at (877) 367-5658
Directions: From downtown Harlan, take U.S. Route 421 north to U.S. Route 119. Bear left onto U.S. 119 south, continue for 3.1 miles. Turn right on Kentucky Route 840 and head up a steep hollow. Continue for 1 mile and the entrance to Camp Blanton will be on your right. Take the first right into the parking area — the second right is a private gravel road for the scout camp
Nearby attractions: The Kentucky Coal Museum and Portal 31 exhibition coal mine in Benham and Lynch; The Schoolhouse Inn Bed and Breakfast; see mountaintop removal from the top of Kentucky’s highest mountain, Black Mountain, just above Lynch; Little Shepherd Trail; Pine Mountain Settlement School; and Bad Branch Falls in Letcher County.

The crown jewel of Pine Mountain is the Blanton Forest State Nature Preserve, which shelters the largest old-growth forest in the state. The preserve’s 3,510 acres encompass more than 2,200 acres of old-growth forest and are bordered by more than 1,000 acres owned by the land trust.

The preserve’s 4.5 miles of trails lead to Knobby Rock, Sand Cave and The Maze. The hike starts at Camp Blanton, a Boy Scout camp on a beautiful lake. From the parking area, the well-marked, moderate loop trail to Knobby Rock covers 2.2. miles with an 800-foot elevation gain.

The expansive view from Knobby Rock is breathtaking. From here, hikers can return on the loop or add the more strenuous 1.3-mile Sand Cave loop, which winds through a maze of sandstone formations to a large rock shelter.

These trails come highly recommended. You will see towering old oaks, massive hemlocks, rhododendron thickets, pristine mountain streams, ferns, wildflowers and rock formations. And if you take the time to explore Harlan County’s rich culture and history, you will find it is just as fascinating as Pine Mountain’s natural wonders.