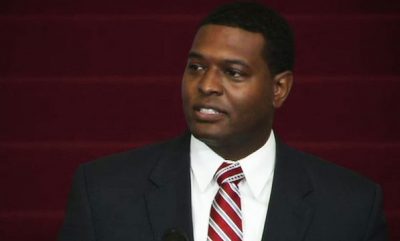 Michael Regan, who was appointed this week as secretary of the N.C. Department of Environmental Quality, pledged to increase transparency at the agency.

After a month-long battle over his election and a last-minute special legislative session to curb his powers, North Carolina’s new governor is getting to work.

On Tuesday, Roy Cooper announced multiple senior staff hires and cabinet appointments, including his choice to lead the N.C. Department of Environmental Quality. In a statement, Cooper said his pick for the agency, Michael Regan, understands that “protecting state resources is vital to our state’s health and economic climate.”

Regan, an air quality expert and North Carolina native, brings decades of experience to the position, serving at the U.S. Environmental Protection Agency under the Clinton and Bush administrations. From 2008 to 2016, he was the senior southeastern director for the Environmental Defense Fund, a nonprofit environmental advocacy organization.

During a press conference, Regan identified the need to develop greater transparency at DEQ and work with all stakeholders so they are “operating with pretty much similar information,” and said his first priority is meeting with veteran agency staff to gather feedback.

That alone could signal a shift from the prior DEQ leadership’s approach to public engagement on environmental issues, especially as it relates to coal ash management and drinking water quality. Environmental advocacy groups welcomed Regan’s appointment after years of calling for a return to science-based decision-making at the department.

Appalachian Voices’ North Carolina Campaign Coordinator Amy Adams, a former DEQ regional supervisor, penned an op-ed for the News & Observer that was published a few days after the election’s outcome was finally clear.

“Under Gov. Pat McCrory, the agency scandalously cast doubt on science and made pariahs out of scientists and career public servants,” Adams wrote. “Leadership second-guessed its own professional staff’s reports, interfered with the recommendations of experts in other departments and knowingly spoke half-truths to the public about the safety of their well water results.

“We need men and women of science at the DEQ who are fact-minded, heart-guided and human-centered. We need people who are up to the task of rebuilding the department and regaining the public’s trust.”

A few days after her’s op-ed was published, Cooper spokesperson Ken Eudy said that restoring the credibility of DEQ was a top priority for the incoming administration. According to Brian Buzby, the executive director of the N.C. Conservation Network, Regan fits the bill.

“This choice is a clear signal from Gov. Cooper that his administration intends to restore a philosophy of transparency, integrity and sound science,” Buzby said in a statement.

Because of a new state law hastily passed by the legislature and signed by former Gov. Pat McCrory in the final days of his administration, Regan and other cabinet-level appointees are now subject to confirmation by the state Senate. A judge recently blocked a law passed during the special session that restructures county and state boards of elections, and Cooper has indicated more legal challenges to new laws could be coming.

The new governor brushed off questions about whether Regan’s background would be an obstacle to his confirmation by an oppositional and often anti-environmental legislature, saying it was important “to appoint the very best people to serve in each of these positions.”