In the war of words over drinking water health advisories between state employees and the McCrory administration, residents are clear on who they trust 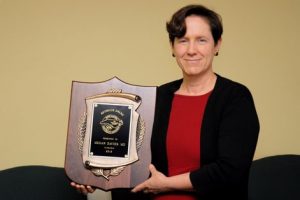 North Carolina’s state epidemiologist, Megan Davies, abruptly resigned from her position last night, writing in a letter that “I cannot work for a Department and an Administration that deliberately misleads the public.”

The department she is referring to is the N.C. Department of Health and Human Services, where she worked for eight years. The administration is that of Gov. Pat McCrory, whose time in office has been tainted by his mishandling of the statewide problem of coal ash pollution.

Davies’ resignation is just the latest development in a public tussle between state employees and the McCrory administration that escalated last week when the transcript of sworn testimony by Dr. Ken Rudo, a toxicologist at DHHS, became public.

Rudo’s testimony raises troubling questions about the role leaders at DHHS and the N.C. Department of Environmental Quality had in downplaying the “Do Not Drink” warnings issued last year to hundreds of families on well water that live near Duke Energy coal ash sites. It also implicates McCrory’s office directly, with Rudo stating that he was called to the governor’s mansion to discuss the warnings and how to ease residents’ concerns about water contamination potentially caused by coal ash.

During his deposition, Rudo told lawyers that members of the McCrory administration wanted to tone down the warnings with language that “would not have been acceptable to me.”

News has happened fast since Rudo’s remarks became public and, when they probably should have played defense, high-ranking officials in the McCrory administration went on the attack.

On Tuesday, McCrory’s chief of staff, Thomas Stith, repeatedly accused Rudo of lying. The next day, the administration released an editorial signed by DEQ Assistant Secretary Tom Reeder and Deputy Secretary for Health Services at DHHS, Dr. Randall Williams, that attacked Rudo for reaching “questionable and inconsistent” scientific conclusions and creating “unnecessary fear and confusion among North Carolinians who are concerned about the safety of their drinking water.”

Rudo stood by his deposition following the accusations by McCrory’s office. And, after the editorial, he released through his lawyers a point-by-point rebuttal of Reeder and Williams.

He’s not alone. Davies — who was Rudo’s superior at DHHS — also told lawyers under oath that she did not agree with the decision to lift the “Do Not Drink” warnings. She also stated that representatives of Duke Energy met with DHHS about the health screening levels set for well water and that she believes the department deliberately misled the public.

Based on Davies’ letter of resignation, it is that belief and the deliberately misleading editorial that led her to resign:

“Upon reading the open editorial yesterday evening, I can only conclude that the Department’s leadership is fully aware that this document misinforms the public. I cannot work for a Department and an Administration that deliberately misleads the public.”

So where does all this leave North Carolinians with contaminated drinking water? Exactly where they were before, as distrustful of DEQ and DHHS as they are of their water’s safety.

On Thursday morning, members of the Alliance for Carolinians Together Against Coal Ash held a press conference outside of the governor’s mansion where they defended Rudo and Davies for putting public health first and made it clear who they trust.