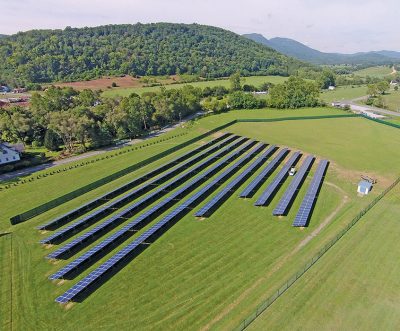 Editor’s note: Versions of this story first appeared in the December-January issue of The Appalachian Voice and the December 15 edition of the Mountain Times.

“We’re at an age where we need to start looking at alternative energy,” says Olivia Haney, an electric cooperative member in Virginia since 1989.

Community solar is a cooperative alternative to installing solar panels on an individual residence. Instead of dealing with the upfront and maintenance costs of solar panel installation on their house, homeowners can invest in a solar farm, or array of solar panels, provided by the electric cooperative. Community solar also allows co-op members with homes not suitable for solar panel installation due to the shading and positioning of the building to benefit from renewable energy.

The solar panels went into operation on November 23. Within the first three weeks, 111 members subscribed to a total of over 300 panels.

“A lot of the interest has been driven by a financial interest so far,” says Jon Jacob, Energy Solutions Marketing Manager for Blue Ridge Electric. However, based on the utility’s model, cost savings will only be possible for members who use high amounts of energy. According to Jacob, Blue Ridge Electric is also reaching out to members interested in the environmental benefits of solar energy.

Blue Ridge Electric serves over 70,000 members, providing electricity to the majority of Watauga, Ashe, Alleghany and Caldwell counties, as well as portions of Avery, Wilkes and Alexander counties. Residential and small commercial customers are eligible to participate in the program.

The View from Virginia and Tennessee

BARC Electric Cooperative’s solar farm consists of 1,750 solar panels. The new project provides up to one-fourth of the total energy needs of each of the 220 households that have joined the solar program.

Community members who live in the five rural counties in Virginia that BARC covers can apply to be a part of the program. This co-op covers all of Bath County and parts of Highland, Alleghany, Augusta and Rockbridge counties. BARC member Haney joined the community solar program after learning about the environmental benefits of renewable energy.

Appalachian Electric Cooperative, based in New Market, Tenn., has also recently started a community solar program. According to Mitch Cain, the co-op’s director of member services, the solar array — which consists of 9,471 panels at 145 watts each — is in a test phase and will be fully operational on Jan. 12. Any residential or commercial member of Appalachian Electric can take part in this new initiative.

Solar panels convert energy from the sun into electricity that can be used in place of other non-renewable sources such as coal and natural gas, which emit carbon dioxide and contribute to climate change.

Originally from Virginia, Katie is serving as the 2016-17 AmeriCorps Energy Savings Outreach Associate in Boone, N.C.