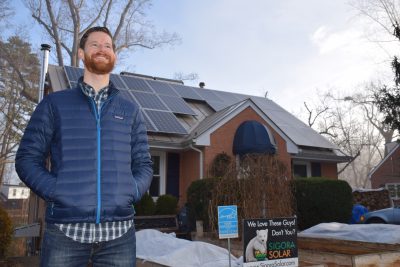 Peter outside his landlords’ home in Charlottesville.

I recently moved into a basement apartment in Charlottesville, Va. The house has solar panels on the roof, and I must admit that knowing my electricity comes almost entirely from a renewable source feels pretty good.

My landlords are not wealthy, so getting solar on their roof was going to involve some sacrifice. They had to think strategically about their retirement funds, energy bills, and fees for staying connected to the grid. Fortunately, they made the numbers work. Now they’re living comfortably and sustainably, and they no longer have an electric bill (except for a modest draw from the grid in the dead of winter). This decision balanced their interest in financial stability with their desire for reliable electric power from a sustainable source.

I couldn’t help thinking about this decision as I began studying the long-term planning process used by Virginia’s electric utilities. Utilities providing public services are regulated to ensure that they — like my landlords — balance reliability, sustainability, and affordability. In return, utilities are guaranteed a profit. In Virginia, this balancing process is embodied by an annual integrated resource plan (IRP).

What’s an IRP and What’s at stake?

Simply put, an IRP is a long-term plan created to ensure that our utilities keep the lights on and avoid sticking customers with a bill for big investments that don’t pan out. This is sometimes referred to as “least-cost planning,” but that doesn’t mean the cheapest option is automatically selected. It means that by studying different alternatives, companies attempt to meet reliability and sustainability goals at the lowest possible cost.

It’s no simple task. With rapidly changing technologies, fuel prices, regulations, and customer-use trends, projecting how much electricity we’ll need and how much it will cost to provide can be quite complex. But an IRP shapes the energy mix and customer bills for several decades, so the stakes are high.

In April, Dominion Virginia Power, the largest electric utility in the commonwealth, submitted its proposed 2016 IRP to the Virginia State Corporation Commission (SCC) for approval. (See an update at the end of this blog.)

Dominion published five alternatives, including four plans that would comply with the federal Clean Power Plan (CPP). Although the fate of the CPP now lies with the courts and the incoming administration, the company believes carbon emissions from power plants ultimately will be regulated.

All five of Dominion’s options share some common elements. For example, each would add 500 megawatts (MW) of solar power produced in Virginia and 1,585 MW of gas-fired electricity at Dominion’s new Greensville power plant. They also would renew 20-year licenses for all four of Dominion’s existing nuclear units, and retire two coal-fired units at its Yorktown plant.

The main differences among the plans are summarized below. New capacity across these plans differs because each would retire different amounts of coal-fired capacity—the greater the coal retirements, the more new capacity.

Without making an official recommendation, Dominion stated a preference for Plan B. Plan B would add the least amount of new solar generation, but according to Dominion’s analysis, it would also be the cheapest of the CPP-compliant options.

Why are These Plans Flawed?

The SCC scrutinized Dominion’s IRP at a hearing in early October. In a “battle of the experts,” Dominion’s senior energy planning employees were cross-examined, followed by expert witnesses from other participants in the case, including Appalachian Voices.

Three major flaws in the IRP stood out:

Electricity demand in Virginia has been pretty flat for the past several years, and with ongoing efficiency improvements, many predict it to remain so, even as our population and economy grow.

However, Dominion’s model shows steady demand growth. One expert explained how the regional transmission organization, PJM, changed its forecasting model in 2014 because it observed in recent years that electricity demand no longer closely tracks economic consumption. PJM’s new modeling accounts for this decoupling of economic growth and energy demand. By contrast, Dominion’s model still uses the old assumptions, tending to produce an inflated picture of demand.

Testimony also revealed that Dominion fails to properly account for how quickly its customers adopt energy-efficient technologies. For example, Dominion’s model includes data from 30 years ago, meaning that 30-year-old lightbulb technology is still part of the calculation. How many 30-year-old lightbulbs are still burning? Dominion admitted that it needs to pay closer attention to the market penetration of LEDs and other technologies.

Dominion pairs this inflated demand forecast with another dubious assumption: the company states that it cannot rely on carbon credit trading or purchasing power on the wholesale market to meet customer demand and comply with carbon regulations. Instead, Dominion intends to generate most of the power needed itself. The company claims that this “island” approach to compliance is the prudent, conservative decision in a time of uncertainty.

SCC judges were sympathetic to Dominion’s view on credit trading, but not on purchases. Historically, Virginia has been anything but an island — buying and selling electricity in the PJM wholesale market, which includes parts or all of 13 states plus Washington, D.C. In fact, Virginia is usually a net importer, relying on power generated in other states to satisfy 10-15% of demand. Switching from being a net importer to purchasing virtually zero power from other states represents a major shift for the commonwealth, and the SCC judges were clearly sceptical.

Dominion’s assumptions that (1) demand will steadily increase and (2) that Virginia must be an “island” simply serve to justify the company’s preference for building new generation, most of it gas-fired.

Even if the company’s assumptions are accurate, why not meet all of this new demand with a greater reliance on utility-scale wind, solar, and other renewables? At the hearing, Dominion expressed concerns about the effect that adding large amounts of renewable generation could have on grid reliability. However, a 2014 study commissioned by PJM found that the regional grid “would not have any significant reliability issues operating with up to 30% of its energy (as distinct from capacity) provided by wind and solar generation.”

As a point of reference, solar and wind currently provide less than 1% of the energy for electric generation in Virginia. According to the U.S. Energy Information Administration, the fuel mix for electric generation in Virginia is comprised of approximately 40% gas, 33% nuclear, 20% coal, 5% biomass, and less than 2% hydroelectric. In other words, there is room to bring a significant amount of renewable generation online before starting a discussion about reliability.

The main reason that Dominion did not include more solar in its IRP is that it assigned solar a hefty price tag from the start. The plan adds an “integration charge” of $390.43 per kilowatt for all new solar generation. Several witnesses said this surcharge is higher than it should be — up to 35 times higher — creating an inherent bias against solar when it comes to least-cost planning and comparing alternatives.

Dominion witnesses were unable to support their number, essentially conceding that the company will need to do a new analysis. The effect of the inflated surcharge in the IRP is that adding solar to a plan immediately makes that alternative much more expensive than it should be. Therefore the plan is less likely to be selected.

Dominion’s stated reliability concerns and its unsupported price tag for solar are in line with the company’s business-as-usual preference for fossil fuels. In fact, the company decided not to publish one of the plans it modeled because it relied too heavily on solar.

Through legal discovery and public testimony, Dominion revealed that an early version of Plan E contained an additional 15,000 MW of solar power and did not include a new nuclear unit. This was referred to as Plan S, and it cost over $1 billion less than the published Plan E. Experts testified that if Dominion had used a reasonable solar surcharge in its modeling, Plan S may have been up to $4 billion cheaper. When pressed, Dominion witnesses again cited their fear that deploying large amounts of solar all at once could present reliability issues.

Despite all this, I remain hopeful that the SCC will hold Dominion to a higher standard. As an investor-owned utility, Dominion has an obligation to its shareholders. But it’s also a regulated utility, so the company must consider sustainability when balancing reliability and cost concerns. However, the company will only do that if the SCC holds it accountable.

The good news is we have a great recent example of how that’s done. Shortly after Dominion’s SCC hearing, Minnesota gave the country a glimpse of what a successful balancing effort looks like. The Minnesota Public Utilities Commission approved an Xcel Energy IRP that would double the state’s wind and solar capacity while retiring two coal-fired plants by 2030. According to the Sierra Club, the plan will add “no new gas without a deeper analysis into other options,” and the plan stands to reduce Minnesota’s carbon emissions by up to 60 percent.

Perhaps the key to getting more companies to take sustainability seriously in their IRPs is to show them why doing so makes financial sense. Groups working on the Minnesota plan used data to make “a persuasive case that renewable energy was the most affordable, economic path forward for the utility — not propping up aging coal plants or adding new gas.”

Just like my landlords installing solar on their roof — once the numbers made sense, choosing sustainability was obvious.

Update: On December 14, the State Corporation Commission approved the Dominion IRP, including all of the scenarios, as a long-term planning guide. Under state law, however, Dominion still will need SCC approval to implement any of the individual projects in the IRP, for example, building a particular power plant or adjusting rates. The good news is that next year the SCC is requiring Dominion to model plans without placing caps on the amount of power that can be bought or sold on the wholesale market. The order also says that Dominion must model “regional” as well as “island” approaches to CPP compliance next year for comparison. Unfortunately, the order does not address Dominion’s method of modeling future demand, nor does it address the company’s approach to pricing solar resources.