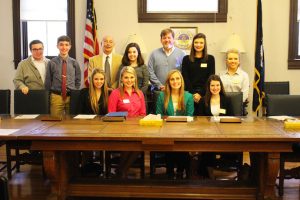 Yesterday, a group of student leaders in eastern Kentucky took a commendable step in support of Central Appalachia’s youth and economic future.

By a unanimous vote, the Appalachian Renaissance Initiative Student Senate passed a resolution of support for the POWER+ Plan, a White House initiative to build more diverse economies in communities hardest hit by the coal industry’s decline. More than 13,000 coal jobs have been lost in Central Appalachia since 2011 alone.

The group, which is comprised of high school juniors and seniors from seventeen school districts, has a particular interest in seeing economic prospects in the region improve. Rural communities in Central Appalachia are struggling with population loss due to a lack of opportunities.

“This POWER+ Plan can remove the need for people to leave,” said Kiley Short, a Junior Senator from Letcher County Central High School. “It stimulates economic growth and business opportunities, which are imperative to the fate of my home, my culture, my people, and my future.”

In Kentucky, Tennessee, Virginia and West Virginia, cities and counties with long histories of coal mining are advocating for the POWER+ Plan — and calling on their elected leaders to do the same. More than two dozen localities in Central Appalachia’s coal-bearing region have passed resolutions similar to the one approved by the Appalachian Renaissance Initiative.

Specifically, the POWER+ Plan directs millions of dollars in additional funding to the Appalachian Regional Commission, the Department of Labor and other federal agencies focused on economic development. It also calls for an additional $200 million per year over the next five years for the federal Abandoned Mine Lands program to restore dangerous unreclaimed mines.

According to the U.S. Office of Surface Mining Reclamation and Enforcement, which administers the program, additional funds would assist communities most severely impacted by coal “in a manner that facilitates economic revitalization on reclaimed lands and restored waterways.”

But the fate of that key component of POWER+, which must be approved by Congress, remains unclear.

Regional groups including Appalachian Voices are committed to seeing the POWER+ Plan succeed. And we’ve been inspired by the level of local support in spite of the uncertainty this bipartisan plan faces in a highly partisan Congress.

The need for new investment in Central Appalachian communities is urgent. In supporting POWER+, these young leaders aren’t just voting for their future, they’re voting for their families’ and neighbors’ present.

As Stacie Fugate, a Junior Senator from Hazard Independent, said after the vote: “My brother has recently been laid off from work. This plan hits home for not only me, but the majority of people in our region.”

We congratulate the Appalachian Renaissance Initiative for its vision and thank its members for speaking up for the region’s future.