Appalachians Look to Branch Out from Coal-Based Economy 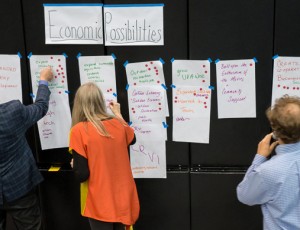 Citizens of Wise County, Va., participate in a community forum hosted by Appalachian Voices to share their vision for a diversified economic future.

Two dozen local government entities in the heart of Central Appalachia’s coalfields have passed resolutions calling for major federal investment to revive the region’s economy, which is struggling in the midst of the coal industry decline. Most have referred specifically to the White House budget proposal called the “POWER+ Plan.” All have passed unopposed.

Starting in July with the community of Norton, Va. —the first in the country to pass such a resolution—a groundswell of support has spread across the region for the plan, a $10 billion proposal to help coal-impacted communities across the country, including more than $1 billion for a range of economic initiatives in Virginia, West Virginia, Kentucky and Tennessee. President Obama announced the plan in February as part of his proposed 2016 budget, but congressional representatives from the coal region have been slow to warm up to the plan.

The resolutions, and a variety of other public and private efforts in recent years, show the huge disconnect between what local citizens see as a necessary way forward to bolster the region’s economy and the politically motivated “war on coal” rhetoric of industry leaders and their allies.

“The benefits of the POWER+ Plan to the people of Eastern Kentucky, both in the short-term creation of jobs and business opportunities, as well as the long-term economic development of the region, are essential to overcome the devastating effects of our current economic difficulties as we transition to a post-coal economy,” wrote Pike County Executive William Deskins in a letter to Rep. Hal Rogers, on September 28, which he included with a copy of the resolution passed by the Pike County Fiscal Court.

The POWER+ Plan would provide $1 billion over five years to coal states and tribal lands to clean up abandoned mines that continue to pollute waterways and pose health and safety hazards, including almost $340 million for the four states of Virginia, West Virginia, Kentucky and Tennessee. It would also provide $25 million to the Appalachian Regional Commission to support local food systems, health care, energy efficiency and other sectors in the agency’s 13-state region. Additionally, the plan earmarks $128 million to support worker retraining and other economic development initiatives in coal-impacted communities, and would ensure the solvency of the United Mine Workers of America’s health care and pension plans.

“The POWER+ Plan will provide funding to put local people to work building the broadband and municipal water and sewer infrastructure that is urgently needed in our mountain communities. We urge our West Virginia congressional delegation to support this funding proposal,” says Carey Jo Grace, a member of the Alliance for Appalachia from Charleston.

At the August meeting of the Wise County Board of Supervisors in southwest Virginia, citizens told officials the plan would help develop the region’s tourism assets, retrain laid-off miners, and support health and pension plans for retired miners. In response, board member Ron Shortt said: “We’re behind you 100 percent on this. We realize how important it is to southwest Virginia and Wise County.”

“There’s a strong sense of excitement and energy these days about the potential for the region, for expanding the opportunities for jobs and more sustainable businesses that are good for workers, communities and the environment,” says Adam Wells, in the Wise County office of Appalachian Voices. This fall, Wells led a project to host eight forums around southwest Virginia to get input from ordinary citizens about their vision for the future. More than 130 people attended, including many younger people who planned to stay involved, he said.

Andrianah Kilgore, 25, was one of them. “I want to see Wise County reach its full potential and I want to work for a better tomorrow, not only to benefit us now, but to benefit the future generations that love Wise and plan to reside here, just as I have chosen to do,” she says.