According to a new report from Environmental Entrepreneurs (E2), Tennessee is seeing clean energy job growth at nearly three times the rate of overall state employment growth. With the recent Clean Power Plan final rule released on Monday, the Volunteer state has an opportunity to not only spur job growth in renewable energy as the report calls for but will also adhere to the Clean Power Plan’s guidelines for reducing carbon emissions.

In a survey of over 1,000 companies in Tennessee, 30 percent of respondents said they believed the Clean Power Plan would increase their business. The report categorizes clean energy jobs as those in the renewable and energy efficiency sectors and includes alternative transportation and greenhouse gas management and accounting. 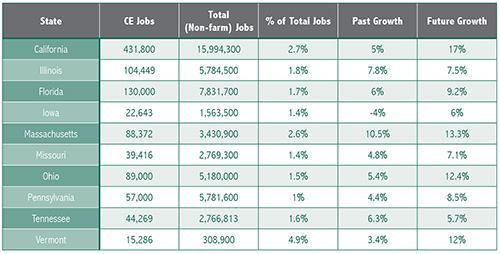 “Clean energy employment rose by 6.3% in the last 12 months, creating roughly 2,600 new jobs and surpassing the overall statewide employment growth of 2.2%,” E2 reports in Clean Jobs Tennessee: Sizing up Tennessee’s Clean Energy Jobs Base and its Potential released Friday, July 31. “Firms project additional growth of 5.7% or 2,500 more jobs in the next 12 months,”

In Tennessee’s current clean energy mix, more than 2,600 businesses employ almost 45,000 workers according to the report.

Although most clean energy jobs in Tennessee are involved with energy efficiency (47%), Tennessee lags far behind other states in this category (see page 10). This is one more reason why incentivizing energy efficiency such as utility on-bill financing programs makes sense for states like Tennessee.

Become active in Tennessee’s clean energy future by telling Gov. Haslam you support the Clean Power Plan. Sign up to get involved in the upcoming Energy Action Team in your area now by contacting Amy Kelly at amy.kelly [at] appvoices.org.