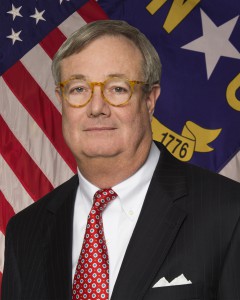 John Skvarla, the embattled secretary of DENR, is leaving the agency to lead the state Commerce Department.

After a tumultuous two years as secretary of the Department of Environment and Natural Resources, John Skvarla is stepping over to lead the state’s Commerce Department. Skvarla will replace Secretary of Commerce Sharon Decker, who is leaving her post to join a digital media company.

Environmental groups, concerned citizens and prominent media outlets have been critical of Skvarla throughout his tenure, and unsurprisingly so — he has expressed doubt over whether oil is a non-renewable resource claiming, “There is a lot of different scientific opinion on that,” and he questions the overwhelming scientific consensus on climate change.

After assuming his position, Skvarla rewrote DENR’s mission statement to be in the service of industries in North Carolina. Under his watch, information related to climate change was removed from the agency’s website, and the department was reorganized and reduced to nearly inept levels.

By any measure, Skvarla is committed to being business-friendly. Responding to an op-ed by Appalachian Voices’ Amy Adams in the News & Observer last December, he called DENR a “customer-friendly juggernaut.” But many saw Skvarla as being too cozy with companies like Duke Energy. A federal grand jury is still investigating ties between DENR and the company responsible for the Dan River coal ash spill.

While this announcement should engender optimism in the North Carolina environmental community, that hopefulness is tempered by trepidation over who will take over the position, and concern that he could be replaced by an even more extreme and environmentally detrimental successor.

There is no word on who will replace Skvarla yet, but Gov. McCrory says he is interviewing candidates and plans to appoint a new secretary later this month. Here’s to hoping he or she is the environmental leader DENR deserves and North Carolina desperately needs.

John Skvarla ushered in an era of regressive environmental policies and procedures that placed industry over the needs of the environment and people. It is our sincere hope that his departure from DENR will allow the return of accountability and reason to the agency.

We look forward to working with someone who will reconsider Skvarla’s industry-first approach, which repeatedly put North Carolina’s natural resources as risk as exemplified by the handling of Duke Energy’s coal ash contamination.