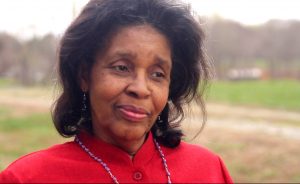 Appalachian Voices and Residents for Coal Ash Cleanup lost an amazing activist and dear friend in late September with the passing of Annie Fulp Brown.

Annie lived in the rural community of Walnut Cove, N.C., her entire life. Her first priority was always her family. She lived across the street from one of her daughters and best friend, Tracey, and she would speak proudly of her grandchildren, who love reading and excel in school. She was a natural nurturer. She would tell me stories about her family all the time, about how her granddaughter would cross the street to eat breakfast at her house before school, about big plans for a 100-person Thanksgiving event, about her prayers for her husband and daughter’s health.

She was also an activist and a champion for her community. She was one of the first people in her neighborhood to speak publicly about her experience living next to the largest coal-fired power plant in the state, Duke Energy’s Belews Creek steam station. As busy as she was, she always took interviews with any media outlet that would listen to her story, from the Winston-Salem Journal to 60 Minutes. She was the rare kind of activist who is capable of boldly speaking their truth and inspiring others to join the cause — and she did it all for her family.

“I have children, and grandchildren, and even great-grandchildren. I’m a young great grandmother,” Annie says in the video At What Cost?, “I want them to be able to have a life that’s free of constant problems caused by toxins. I’m concerned about them.”

Annie’s concern was born from her experience of living next to the Belews Creek power plant for decades.

When Duke Energy built the Belews Creek power plant in the early seventies, Annie and her neighbors had to move, but only a couple of miles down the road. “We still formed that community,” Annie said, “pretty much the same people, the same families.”

Annie suffered many ailments throughout her life. But as she got older, she began to see a connection between the pollution from the Belews Creek plant and the illnesses she and her neighbors were suffering.

After the Feb. 2 coal ash spill into the Dan River, the N.C. NAACP held a town hall in Eden, N.C. Annie spoke to a church packed with more than 70 people openly and clearly about her health concerns. She showed them the list of names she had collected of people in her community that suffered from strange illnesses and early deaths. She spoke about a mysterious illness that immobilized her right hand.

Annie told the crowd about the ash that used to fill the air every day, “The place where that fly ash landed ate the paint [off the car]. I didn’t think anything of it because no one had informed us of any toxins, any poisonous metals … it was just flying in the air, my kids were out playing in it.”

Rev. William Barber, a leader of the Moral Monday movement, told Annie at the town hall, “Sometimes God allows people to live so they can give their living testimony of the hell they’ve been through so that those who are yet living will hear that testimony and take up the cause of fighting for justice.”

I know Annie desperately wanted things to change for her family and her community. She stood up and spoke out against Duke Energy’s pollution — she knew it was an injustice. It’s not every day that you meet someone willing and brave enough to put their energy into stopping injustice, but Annie was one of those people, and I feel blessed to have known her.

“She was a courageous spokesperson for her community,” reflects Kara Dodson of Appalachian Voices, “Annie had such a trustworthy, friendly personality that really connected with people and allowed them to join our fight wholeheartedly. I think her faith and love for her family is what kept her speaking out, telling her story, motivating others to care. She always had a joke, a funny story that would keep the mood hopeful. And as far as I can tell, she was born to be a fighter.”

At her Homegoing Service, the church was packed — a testament to how well loved and respected she was by her community. As we lifted our voices in song and prayer, I remembered sitting outside a different, smaller church with Annie, watching as she picked five-petaled flowers. She told me about how the flowers were good luck, and how she and her grandmother used to pick them together. She told me about growing up in Walnut Cove, about wearing dresses made of flour sacks, spying on the local moonshiner, and the time she drove her daddy’s car down the road. I’ll always remember with great fondness and admiration her stories, her strong spirit, and her unending love for her family.

Today, Residents for Coal Ash Cleanup and Appalachian Voices continue the fight to clean up the toxic coal ash that has polluted Annie’s community for decades. As the newly formed coal ash commission begins deciding how, when, and even if each coal ash site will be cleaned up, Annie’s brave words and love of her grandchildren come to mind, “Clean water is a must, for all of us.”