The North Carolina Mining and Energy Commission issued their final vote on proposed changes to the rules regulating the process of hydraulic fracturing for natural gas last Friday, Nov. 14, voting unanimously to approve the rule set. 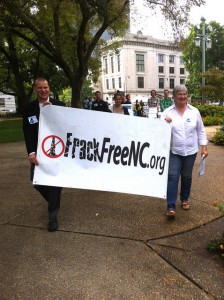 Members of the Frack Free NC Alliance, comprised of over 30 groups across N.C., deliver nearly 60,000 petition signatures to Gov. McCrory calling for a ban on fracking.

Between July 14 and Sept. 30, the MEC received 217,000 public comments on more than 100 draft rules regarding safety standards for fracking in the state. More than 2,000 North Carolinians attended the commission’s four public hearings, and the vast majority of speakers opposed fracking and asked for stronger rules. The MEC’s response, written in the Hearing Officer’s report released two weeks ago, showed a considerable lack of consideration for public comments, a fact that disappointed concerned citizens and advocates across the state. Almost all of the recommendations fell short of what the public overwhelmingly asked for, and the few recommendations that strengthen the rules only minimally do so. 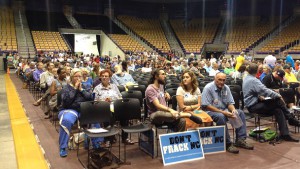 Hundreds gather at the MEC hearing in Cullowhee, N.C. All 80 speakers opposed fracking.

For example, though the MEC received over 2,000 comments asking them to increase setback distances from occupied buildings and water sources from 650 feet to at least 1,500 feet, the Hearing Officer’s only recommended one change to setbacks– an additional setback of 1500 feet from surface waters that supply municipal drinking water (all other setbacks remain 650 feet). Though the MEC originally promised that North Carolina would have the strongest rules in the country, they acknowledged in the Hearing Officer’s report that many states have much larger setbacks from occupied buildings and water supplies, ranging from 800-2,000 feet. Clearly, the MEC was not willing to follow through on their promises to the public or adequately respond to the public’s overwhelming concerns.

The MEC acknowledged in the the Hearing Officer’s report public concern over several other aspects of the rules, including comments to ban open pits for fracking waste-water storage, and advocating for unannounced inspections, air monitoring, stronger bonding rules, and health studies. However, despite these concerns, the commission did not make any substantial changes in these areas before adopting the rules. While the MEC did change the language that had previously required inspections to be announced, they did not include any provision in the rules requiring that inspections be unannounced, either.

Additionally, the rules do not address air quality issues, chemical disclosure or compulsory pooling, an extremely controversial practice where landowners who do not wish to lease their mineral rights are forced to accept drilling anyway. Some of these issues, most notably, forced pooling, may have to be dealt with by the general assembly before drilling can begin in the state. 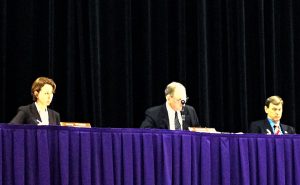 In the meetings preceding Friday’s final vote, members of the commission were heard making negative statements about the public’s comments. Both commissioners Howard and Womack dismissed the public’s comments as “useless” and lacking science. The detailed comments recommending stronger rules for well construction were disregarded as “telling the industry how to suck its own egg.” These responses from the commissioners are especially disturbing given that many groups and individuals did submit scientific comments, complete with peer-reviewed studies, and that North Carolinians put forth a great deal of effort to express their concern with the MEC’s weak rules. Perhaps the only voice of reason came from commissioner Amy Pickle, who warned the other commissioners against speaking too proudly of the rules since they are not what the public wants to see.

Given the rushed time frame for review and consideration of the public’s comments and the industry-friendly makeup of the commission, it’s not surprising that the final rules do not adequately protect North Carolina’s water, air and public health from the documented risks associated with fracking. However, given the enormous public outcry, members of the anti-fracking community had at least hoped for better.

The rules will now move onto the Rules Review Commission and, barring legislative action, permits for fracking may be issued as early as April 2015.

Keep updated on how you can help keep fracking out of the tarheel state by signing up for FrackUpdates here.