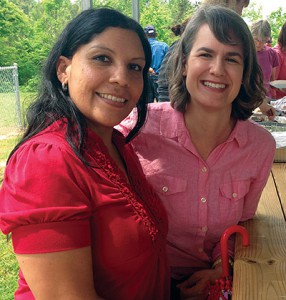 Danielle Bailey-Lash (left) sits with her childhood friend Caroline Armijo at a recent paddle and picnic event to raise awareness about coal ash in the Belews Creek community. The friends are both featured in Appalachian Voices’ new video “At What Cost?” Hear their stories about living with coal ash at appvoices.org/coalash

Annie Brown, a lifelong resident of Belews Creek (pronounced “Blues”) in Stokes County, N.C., sits outside a small brick church. She’s looking at a patch of tiny flowers, trying to pick out the odd five-petaled bloom. Her grandmother taught her long ago that five-petaled flowers are good luck, even better than finding a four-leaf clover. Brown and others in the rural community — where folks all know each other and fondly recall growing up together — have been praying for better luck for years. Lurking just down the street from their homes is the Duke Energy Belews Creek Steam Station and the largest toxic coal ash pond in the state.

Duke Energy began operating the Belews Creek Station in 1974, and over time the company has built six coal ash dumps to store the waste — a byproduct of burning coal — including the massive pond that holds more than 8 billion gallons of coal ash and water.

Brown, who lives two miles down the street from the power plant, started getting sick when she was 22. She remembers the ash that used to come out of the stacks and land on her car, eating away the paint. “Nobody had informed us of any toxics,” she says, “It was just floating in the air, my kids were out playing in it.”

Concerns about Duke’s toxic coal ash have prompted Brown and dozens of other community members to meet regularly at Forest Chapel Church. Since July 2013, the community has gathered with Appalachian Voices’ staff and volunteers to discuss the coal ash and how to get it out of their neighborhood once and for all. The group, which calls itself “Residents for Coal Ash Cleanup,” has recently grown in size, becoming more outspoken and more certain of their demands.

Doris Smith, a resident of Belews Creek for 70 years, has been with the group since the beginning. She is a fiery woman who frequently walks door-to-door in her neighborhood, raising awareness about the risks the coal ash dumps pose to the community. “We have to think about our children and our grandchildren,” she declares. “It’s not so much about me or my husband; it’s about them. If we don’t do something about it, who will?”

Another life-long resident of Belews Creek, Danielle Bailey-Lash started attending community meetings a few months ago at the urging of a friend. An otherwise healthy woman, Bailey-Lash was diagnosed with stage 3 brain cancer at age 35. After finding a tumor the size of a juice box, the doctors told her she only had a few months to live. Luckily, Bailey-Lash beat the odds — and her cancer. “It’s always on my mind,” she says as she pulls her hair back to reveal where a piece of skull is missing. “I would never want for my children or my neighbors to have to go through this.”

Bailey-Lash, like others in the community, is concerned that the unusually high rates of cancer and other rare illnesses in a 10-mile radius around the power plant may be a result of the thousands of pounds of toxic pollution that Duke’s Belews Creek plant releases into the air and water every year.

“Since I started going to the meetings,” says Bailey-Lash, “I’ve realized that my illness, and the illness of all the people that are on this street … could be linked to the environmental issues we’ve discovered are right here in our own neighborhood.”

Doctors have never been able to explain Annie Brown’s illness, which left her with a twisted hand that she cannot use. However, after reading about the health problems that the pollutants in coal ash can cause, Brown feels there must be a connection. Her daughter has also suffered from many inexplicable illnesses, despite living an otherwise healthy life. When Brown comes to meetings, she often brings a notebook with a list of residents on her street who have fallen ill or died prematurely. “I know them personally,” she says, looking over the list containing more than 30 names. “Young people, coming down with strange illnesses, like kidney cancer. Three young people, already on oxygen.”

Members of Residents for Coal Ash Cleanup regularly express a distrust for Duke Energy and the state. They say that Duke and its state regulators are not doing enough to protect their community or health. Mary-Frances Wrenn, one of the group’s members, says she won’t drink her well water, which has taken on a black color since the power plant began operation. “I buy bottled water,” she says, shaking her head. “I don’t trust it.”

Since the February coal ash spill into the Dan River brought national attention to the coal ash problem in North Carolina, Governor Pat McCrory, state legislators, and Duke Energy have responded to the public pressure in various ways. So far, all the proposed coal ash cleanup plans leave Belews Creek out.

“I’m asking Duke Power to please step up,” says Smith. “They’ve had 40 years to make this mess, so why not clean it now?”

Residents in Belews say they are tired of buying bottled water and enduring the ash trucks that speed down their roads, releasing sticky black particles when the wind blows. At a recent community meeting, members raised concerns that a dam could break, releasing thousands of tons of ash onto their homes or into the Dan River. McKinley Warren, a resident who previously worked for Duke Energy, explained to the group that the coal ash landfills are only about 100 feet from the Dan.

The residents of Belews Creek are not the only community at risk from Duke Energy’s coal ash. Duke owns thirteen other power plants across North Carolina, all with massive coal ash ponds that are illegally polluting groundwater. Increasingly, the communities surrounding these toxic dumps are also speaking out about health issues.

The Yadkin Riverkeeper, Dean Naujoks, works with the community surrounding Duke’s Buck Steam Plant in Rowan County. Like Belews Creek, the Buck community has also experienced unusually high rates of cancer and has not been mentioned in any clean-up plans.

“Our recent well testing seems to suggest chemicals found in coal ash may be contributing to cancer clusters found in the community,” says Naujoks. “No one should ever have to live in fear of their health being compromised or drinking water from their own private wells.”

Back in Belews Creek, Annie Brown — a peaceful woman despite the illnesses she and her family have suffered — has one simple request: “I would like for Duke Power to take some interest in the human life.”

Watch “At What Cost?” video here.