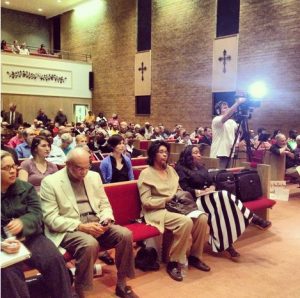 Concerned citizens filled a church in Eden, N.C., last week to learn more about coal ash and the threats it poses to the environment and human health.

Last Monday, concerned citizens packed the pews of a local church in Eden, N.C. The crowd, which was a diverse mixture of age, race and background, assembled for a town hall meeting on coal ash organized by the North Carolina chapter of the NAACP as a part of the Moral Monday movement.

Duke Energy’s Dan River coal-fired power plant is located in Eden, and it was there that a stormwater pipe below the massive coal ash pond failed in February, spewing thousands of tons of toxic laden coal ash into the Dan River.

Citizens are still seeing the effects of the spill. Mollusks and turtles are washing up dead on the banks of the Dan and local farmers are concerned that they may not be able to rely on water from the river this season or in the future.

The NAACP organized the meeting to raise awareness about the spill and its aftermath, but also to shed light on the coal ash problem that exists across North Carolina. The group is drawing attention to how most coal ash ponds are located in low-income communities and communities of color. Across the country, communities of color and poor families face environmental injustices that burden them with the economic and health impacts of pollution.

At the town hall meeting, Annie Brown gave testament to environmental injustices of coal ash. Brown has spent her entire life living near the Belews Creek Coal Plant, which has a coal ash pond with a capacity of more than four billion gallons — the largest in North Carolina. She has raised children and grandchildren in the area and has watched her family and neighbors become ill with unusual diseases and cancer. Brown bravely spoke to the packed church about her own health issues and the scores of her neighbors she has seen die prematurely over the years. Watch her entire speech here.

Annie Brown was one of seven panelists at the meeting. Others included representatives from Appalachian Voices, the Southern Environmental Law Center, NC WARN, and Dawn Witter, a resident of Danville, Va., who spoke eloquently about the economic effects the spill has had on the city and the potential health risks associated with water pollution. Witter explained that Danville was once a center for industry, and the community, economy and river have borne the burden of pollution for decades. For her, the Dan River spill was a painful continuation of that trend.

North Carolina NAACP President Rev. William Barber gave a rousing speech about the sinful nature of the issue. He pointed out that the same government that cut healthcare for the poor, also cut back environmental regulations that protect human health, especially for those North Carolinians’ who live in communities that are the most impacted by pollution.

The information presented at the town hall meeting left little doubt in participants’ minds that Duke Energy is not a trustworthy company. Time and time again, Duke has chosen to ignore the voices of the communities in which it stores its toxic waste dumps rather than acting as responsible neighbors and protecting communities from pollution in ways that would save lives.

Last week, Duke requested that citizen groups who have intervened in the state’s coal ash lawsuits be barred from participation. The judge has yet to make a decision, but based on Duke’s previous dismissal of community concerns, it is imperative that communities be given a voice in the lawsuit. Without anyone to advocate for their health, it is likely that Duke will continue to allow life-threatening pollution to contaminate communities.

To watch more of the town hall meeting, check out the live stream here.