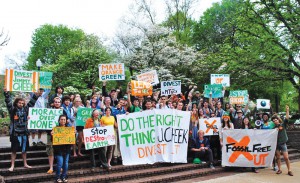 Students across the nation are working to persuade their academic institutions to withdraw their funds from fossil fuels as a way to show their opposition to the negative impacts of conventional energy.

Swarthmore College students claim to have started the college divestment movement in response to visiting a mountaintop removal site in West Virginia. Since 2010, 11 colleges and universities in the United States have committed to stop investing in fossil fuels, and approximately 300 campuses have a divestment campaign in place.

David Hayes, student leader of the University of Tennessee Coalition for Responsible Investment at UT – Knoxville, says that divestment is only new to the environmental movement, and that it has been used for a variety of social and political causes, such as the protest against racial apartheid in South Africa in the late 70s and early 80s.

The students at UT – Knoxville started their fossil-free divesting movement in January 2013, and have raised awareness through petitions, sit-ins and protests on campus; at a rally this past April, 60 people including local grassroots organizations, campus workers, and faculty took a stand for the cause. Although the Coalition for Responsible Investment’s petition gathered nearly 2,000 signatures since 2013, the board of trustees refused to divest and the group has turned its attention to persuading the chancellor.

At the University of Virginia, students are more focused on the climate crisis in general, but divestment is a clear rallying point. According to Lia Cattaneo, leader of the school’s Climate Action Society, while the students don’t have a formal divestment movement, they push the administration to invest in green companies, pursue sustainable options and maintain transparency with the school’s finances. Cattaneo explains that if a university divests from fossil fuels, it should also work to reduce its consumption of dirty energy.

The students at Clemson University, in the foothills of South Carolina, have also taken a strategic approach to the divestment movement by talking to the administration about re-investment. Alex Ryan, manager of the student-run divestment campaign at Clemson University, says that the students are working with the school’s investment committee to submit resources to explore the possibility of divestment through research. “This is a very complex financial issue,” says Ryan, “It sparks the conversation [about the effects of fossil fuels], which is what we really need.”

The Billion Dollar Green Challenge is a network of more than 40 colleges and universities that have committed to investing a combined total of $1 billion in green revolving funds. Each school establishes its own investment fund, which is used to help further their campuses’ sustainability endeavors such as lighting upgrades and building efficiency retrofits. The money saved through lower electric bills is used to replenish the fund. In Appalachia, Mars Hill University, Catawba College, Sewanee – The University of the South and Ferrum College are participating in the Billion Dollar Green Challenge.

University of Tennessee was the first university to switch to Green Seal Certified cleaning products in 2007. Green Seal is an environmental nonprofit that certifies eco-friendly products, such as paint and cleaning supplies. In the past few years, universities across Appalachia have been phasing out potentially toxic cleaning supplies for non-toxic alternatives. Some schools, such as West Virginia University, even encourage students to make their own homemade cleaning supplies. To learn more, visit: greenseal.org