“App State can no longer hide behind its reputation in sustainability,” wrote Weiss. “We can not continue to watch those in power fail to care for their students and our community. We must demand action now.”

Weiss is a leader of a group called Appalachian Climate Action Collaborative, or ClimACT, a community organization made up of students and alumni, with some faculty and community members as well.

ClimACT formed immediately after the Intergovernmental Panel on Climate Change released their report Global Warming of 1.5°C in October of 2018. According to Weiss, the group has been pressuring the university to use its resources to be more proactive about the climate crisis.

“We’re fighting to avert the climate crisis and build new resilient and healthy systems that take care of people, and that respond to the climate crisis in a way that benefits and protects and uplifts everyone equitably,” Weiss says. 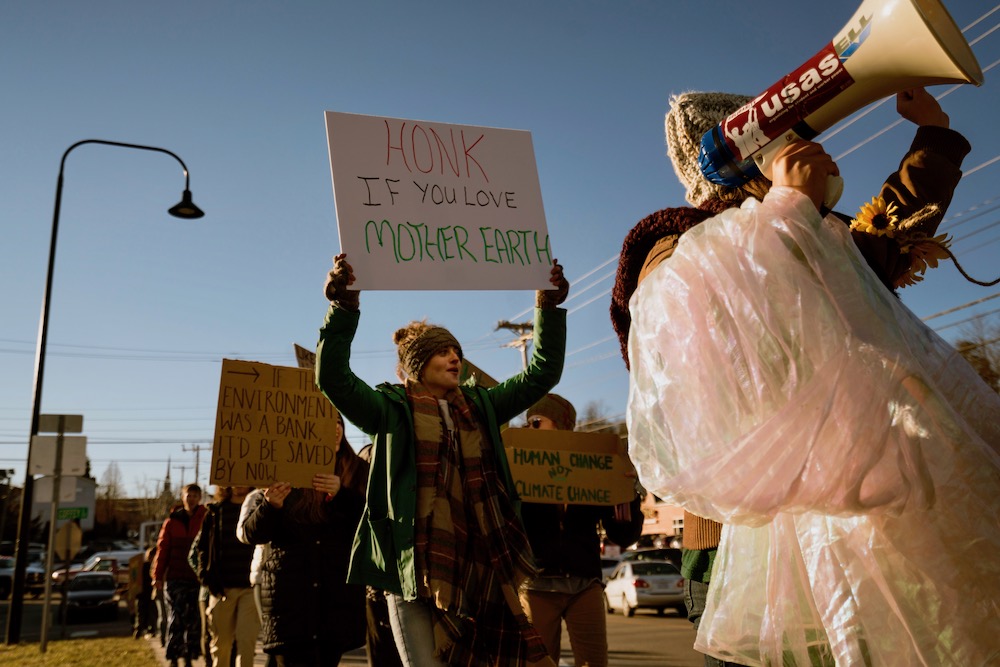 College students like Weiss have faced unprecedented challenges to their education and professional development amidst COVID-19. But this hasn’t stopped many students across Appalachia from staying engaged in the growing fight against climate change. Students have established clubs and organizations centered around climate action, engaged with their universities on initiatives that include emission reduction and zero-waste targets, and championed calls for fossil fuel divestment.

One way ClimACT is pressuring the university is on what the group sees as a lack of boldness in the university’s climate action plan, called AppCAP 1.0, released in April 2021.

According to Weiss, ClimACT was involved in the development of AppCAP 1.0 for several months before ultimately becoming disillusioned with what they saw as a lack of meaningful inclusion of student voices and similar shortcoming to a previous plan released by Appalachian State in 2010.

“We were excited,” says Weiss. “We thought it indicated that there could be some real progress happening from inside the university. But at the same time, we saw that there was a past climate action plan. Basically, the bottom line is that it was a plan that was drafted that had no accountability measures. It had no really solid commitments or direct actions. Because of that, it sat on a shelf and didn’t really do much.”

ClimACT ultimately decided to end their participation on AppCAP 1.0 in September 2020, announcing their intention to release their own plan, called the Just CAP. ClimACT’s Just CAP, an ongoing project initially released in November, calls on the university to achieve carbon neutrality by 2022.

The university’s latest AppCAP builds on the original plan released in 2010, but specifically presses the university to achieve climate neutrality “as soon as possible” or by 2050 at the latest.

The Race to Neutrality

Just like the 2010 plan, the AppCAP uses the term “climate neutrality.” Climate neutrality is achieved when all greenhouse gas emissions are either eliminated or offset through climate protection measures.

How Sustainable is Your Campus?

Student-led groups across the region are pursuing a host of other climate and sustainability initiatives on their campuses. You can review initiatives and track progress of universities across the world through the Second Nature Reporting Platform.

Most universities have focused their reduction efforts on pursuing what is called “carbon neutrality.” Carbon neutrality is the elimination or offsetting of carbon-based emissions, one of the main culprits of climate change. It does not address other greenhouse gases such as methane and nitrous oxide.

“The term ‘climate neutrality’ is, in some ways, more bold because it doesn’t just focus on the decarbonization term of ‘carbon neutrality,’” says Sam Gass, the chair of the Student Government Sustainable Development Committee at Appalachian State, and a supporter of the 2025 climate neutrality goal. “So while App State can definitely be doing more, we should recognize that we are in some ways being at least a bit more bold.”

At least 10 universities — including American University, Dickinson College, and the University of San Francisco — have achieved carbon neutrality, according to Second Nature, a nonprofit focused on accelerating climate action in higher education. Hundreds more are on their way.

In 2019, North Carolina Gov. Roy Cooper set a statewide goal of 2050 for achieving carbon neutrality for all state units, including Appalachian State and the 16 other public institutions in the University of North Carolina System.

In Virginia, Gov. Ralph Northam signed a law in April 2020 that sets a similar goal to achieve neutrality by 2050. Radford University Professor Stockton Maxwell told the Roanoke Times in November that this law will help Radford and other universities in Virginia meet their neutrality goals.

Virginia Tech recently reaffirmed its 2009 commitment to achieve carbon neutrality, 100% renewable electricity and zero waste all by 2030. The plan was drafted by a 26-member Climate Action Commitment Working Group, of which 10 members were students.

John Randolph, chair of the working group, says that the goals of the plan are ambitious but not uncommon among top universities, citing the University of Virginia and the College of William and Mary as institutions who share the 2030 goals.

“We can be more ambitious on our campus,” says Randolph. “We believe it is the role of the university to lead the way and show the way with more ambitious goals.”

But Randolph acknowledges that the Virginia Tech plan is unique in a few ways. While most universities target only direct emissions and purchased electricity, Virginia Tech is also targeting what Randolph calls “emissions related to behavior,” including waste and recycling, water, commuting to campus, business travel and agricultural emissions. The plan also includes on-campus solar projects, emission reduction research and instruction through a Climate Action Living Laboratory, and an embrace of climate justice for particularly vulnerable communities.

Most importantly, the plan is projected to pay off.

“We prepared a detailed financial assessment of the [Climate Action Commitment] for the Board of Visitors and it showed the CAC would require a significant investment by the university,” says Randolph, “but it would result in positive financial savings of about $5 million per year in 2031 and a net present value savings of $25 million through 2050.” 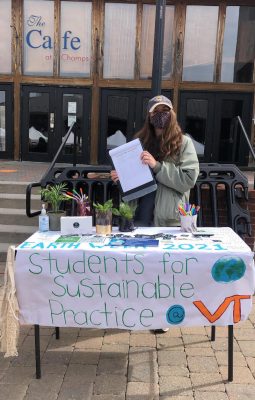 Erika Tuttobene, a Russian major and president of the Virginia Tech Students for Sustainable Practice club, praised the plan for being “extremely ambitious.” She states the club is focused on promoting environmental action, education and mindfulness on campus and in the community. The club often hosts educational tabling, environmentally-focused events, and discussions around campus and community topics. Tuttobene says that the club recently had a meeting where they discussed the Virginia Tech recommitment plan.

“The discussions revolved around unpacking the plan as students and seeing how students could help the university see the commitment through,” she says.

In contrast to the pressure used by ClimACT at Appalachian State, Tuttobene sees her club’s role as mainly supportive and awareness-based. But while they may differ in style, both organizations have come to understand the importance of making environmental work on campus more inviting.

“Some of the other environmental organizations can be really intimidating I think,” says Tuttobene. “So we’re here to just have really honest conversations and let people ask questions and increase their awareness of things.”

“As someone who came late into this kind of work, I know it can seem really intimidating and seem like a lot,” says Donovan, senior sustainable development major at App State. “I didn’t know what I could contribute. But there’s something everyone has to offer.”

Both Tuttobene and Donovan see the issue of divestment as central to student climate activism.

“Divestment is really just the selling of investments in the stock market,” says Simon Jolly, sustainability major at the University of Tennessee, Knoxville and co-president of a divestment group called Fossil Free TN.

According to the Wall Street Journal, university and college endowments in the United States account for more than $600 billion in total investments, some of which is in fossil fuels.

Jolly said his organization has been in contact with student organizers at the University of North Carolina at Asheville, a university that partially divested in 2019.

Kelsey Hall, a 2020 graduate of UNC Asheville’s Environmental Management and Policy program, was a member of UNCA Divest, a group that pressed the university to move part of its endowment away from the UNC Management Company and into a new, fossil-free portfolio. 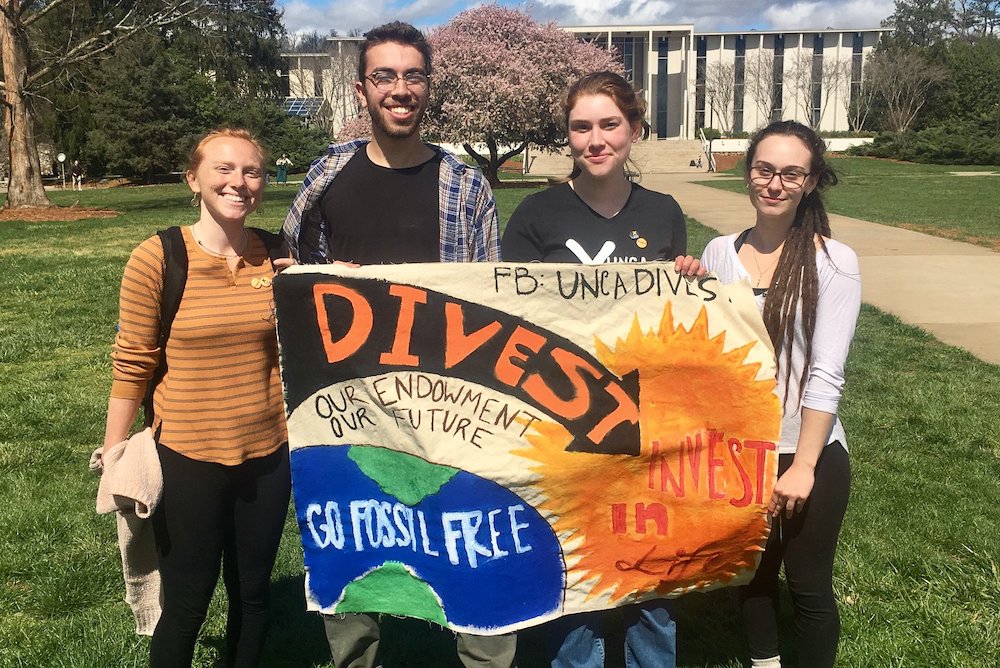 Kelsey Hall and other students pose with a banner calling on UNCA to divest from fossil fuels. Photo courtesy of Kelsey Hall

The UNC Management Company is a nonprofit organization that manages the investments for the institutions of the University of North Carolina System. The company aims to invest between 3% and 9% of the total assets they manage into “energy and natural resources.”

In June 2019, Hall states, UNC Asheville’s Board of Trustees passed a resolution calling for 10% of the school’s $50 million endowment to be reallocated into a new portfolio managed by a more socially and environmentally responsible company.

According to Hall, the administration told students the 10% is meant to be a test run to compare the return on investment from the new portfolio to that of the 90% in the UNC Management Company.

“We were going to have this portfolio just exist and established for a few years,” Hall says. “And at that point, we would have data on the investment returns to compare to the UNC Management Company. And if it was comparable, the administration told us there is no reason why we wouldn’t continue to divest more or all of the endowment into this new portfolio.”

As a UNC System institution, Appalachian State’s investment assets are also under the UNC Management Company. ClimACT’s Just CAP demanded that the Board of Trustees divest $50 million from the UNC Management Company and reinvest it “into internal sustainable infrastructure, into Community Development Financial Institutions (CDFIs), and into community development.” The AppCAP does not address how Appalachian State will handle its investments going forward.

Warren Wilson College, a private North Carolina institution with an endowment of $52.7 million as of June 2018, set a goal to completely divest from fossil fuels over a period of five years after a unanimous vote by their Board of Trustees in 2015. According to their website, the college successfully divested their entire portfolio in 2020, and they have since gained recognition for their sustainable investing strategy.

Students at some universities have had to organize and pursue more confrontational measures to achieve results.

“Another part of this process is creating a moral and ethical reinvestment plan to move forward,” Roth says. “Obviously, divesting is great, but it wouldn’t do much good if we were to stop investing in the fossil fuel industry just to reinvest that money in an equally problematic industry.”

When asked why they feel inclined to pursue climate action at their university, many student activists highlighted the opportunities afforded to students who want to make change.

“Universities are such large institutions that influence so many people’s lives. Why wouldn’t you want to strive to make that better, even if not for yourself but for future students,” says Jolly.

According to Weiss, students often feel powerless, but at a university, there are actual outlets for students to organize and to press those with power to make change.

“Students are humans,” says Weiss. “I’m not just a student, I’m a human. And I’m part of this nation, and this state, and this world, and I’m just doing everything I can while also trying to learn.”