Energy efficiency is a smart investment, so it makes sense that some of our smartest institutions –– colleges and universities –– are actively pursuing it. Schools across the nation are building “deep green” residence halls, updating old campus buildings, and implementing innovative heating and electrical systems to slash their carbon emissions and environmental impact. Read on to learn more about the greening efforts at five such colleges in Appalachia.

In August 2013, Good Housekeeping magazine dubbed Berea the sixth greenest college in America, and for good reason. That same month, Berea opened the Deep Green Residence Hall. From its 100-percent recycled brick exterior to the student-built, sustainably harvested wood furniture, the new student dormitory is “deep green” inside and out. The site also features a series of rain gardens, trees for increased shade and energy efficiency, and a permeable parking lot to decrease stormwater runoff.

Warren Wilson College is home to one of the top 10 greenest dormitories in the world, according to Mother Nature Network.

Open since 2003, EcoDorm was the first building on a college campus to earn LEED Platinum certification, the highest rating possible from the U.S. Green Building Council. Home to 36 students, EcoDorm features photovoltaic panels, solar hot water panels, high-efficiency boilers, and window overhangs for summer shade and winter sun. The building doesn’t use air conditioning, and certain appliances are prohibited, including hair dryers and mini-refrigerators. All permitted appliances are EnergyStar rated for efficiency. A 10,000-gallon salvaged train tanker car collects rainwater, which is then used to irrigate the surrounding permaculture landscape or pressurized for flushing –– for the toilets that require water, that is. This pioneering residence hall features two composting toilets. 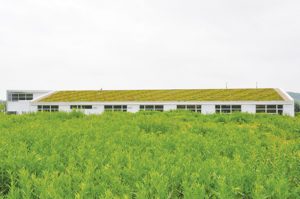 The grounds surrounding the Hocking College Energy Institute in Nelsonville, Ohio, are planted with native grasses that only need to be mowed once per year, and the vegetated roof provides insulation and reduces stormwater flow. Photo courtesy Hocking College

Located in Appalachian Ohio, Hocking College is the state’s only two-year college that offers degrees in alternative energy technologies. Students in these programs engage in hands-on learning at the LEED Platinum-certified Hocking College Energy Institute. Open since 2009, the institute uses 60 percent less energy than conventional structures of the same size and 15 percent of its electricity is supplied by photovoltaic panels. Students can see for themselves; the building’s mechanical workings were left exposed to serve as a learning tool. The site also features electric vehicle recharging stations, stormwater detention ponds, and a 4,000 square-foot green roof planted with native Ohio vegetation.

In 2012, Hocking received a $440,000 grant from the U.S. Department of Energy to upgrade its heating and cooling systems campuswide, resulting in a reduction of carbon emissions by more than 600 metric tons per year.

In early 2013, Maryville was selected to participate in the EnergyRight Solutions for Higher Education program. Sponsored by the Tennessee Valley Authority, the program provides funding to four Tennessee schools for energy efficiency projects and consulting, energy audit training, and stipends for student interns to implement the initiatives.

Maryville College previously teamed up with the TVA in 1982 when, along with the U.S. Department of Energy, they piloted a new wood waste steam heating system, which was showcased during the 1982 World’s Fair in nearby Knoxville. Today, the plant provides heating across campus, including in Maryville’s oldest building, Anderson Hall, which is currently under renovation. When complete, the building will feature custom-made double-coated windows for increased insulation and air handling units that use outside air to help regulate interior temperatures, reducing the load of the heating and cooling plants.

Nestled in Virginia’s Blue Ridge Mountains, Ferrum College is all about going green. This commitment is on prominent display at its English Biomass Energy and Research Complex.

The combined heat and power facility provides approximately 65 percent of on-campus heat and hot water, primarily through its main 1.0 megawatt boiler, which burns lumber industry by-products to produce steam for hot water. Excess steam from the boiler is diverted to an electric turbine that generates approximately 800 kilowatts of electricity for campus use. A smaller biomass boiler at the facility is used as a research and teaching tool for students to encourage continued innovation in alternative energy technologies.