North Carolina “off the sidelines” to fast-track fracking

Four months after a massive coal ash spill devastated the Dan River, and before the state has remedied its coal ash problem, North Carolina is poised to open a new can of worms. 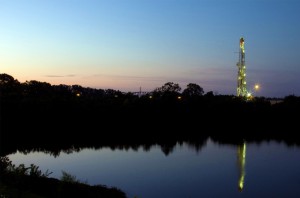 Fracking operations like this one in Texas could soon spring up in North Carolina after Gov. Pat McCrory signed a bill lifting the state’s moratorium on natural gas drilling. Photo by Daniel Foster/Creative Commons.

With few obstacles left in the way, test drilling to assess the amount of gas in the state’s Piedmont could occur this fall and fracking could officially begin in North Carolina by spring 2015.

Before reaching the governor’s desk, the legislation was rushed through the state House and Senate and ratified in the course of about 48 hours. The 26-page bill covers everything from exploration and permitting to reclamation and severance taxes.

Now that the bill is law, state-issued drilling permits could come sooner than the legislature previously promised. Oil and gas companies can now receive permits 60 days after the state Mining and Energy Commission’s proposed regulatory program is finalized, even though lawmakers originally said the rules would be reviewed before any subsequent legislation or vote to lift the moratorium took place.

Until recently, North Carolina had no reason to regulate oil and gas drilling, and the rules announced so far align closely with industry interests such as Halliburton and the American Legislative Exchange Council that have put external pressure on the commission.

Gov. McCrory likes to say that North Carolina has been on the sidelines of the U.S. gas boom, spectating while other states reap the economic benefits that can result from rampant natural gas development. But fracking has also burdened communities with the risk of water contamination, air pollution and other environmental and health hazards.

Apparently taking those well-established consequences into account, Gov. McCrory claims North Carolina has learned from other states’ experiences. “The expansion of our energy sector will not come at a cost to our precious environment,” the governor said in a statement. “This legislation has the safeguards to protect the high quality of life we cherish.”

As reassuring as that may sound, the push over the past few years to begin fracking has been mired in the types of missteps, broken promises and conflicts of interest considered characteristic of the state’s leadership of late. 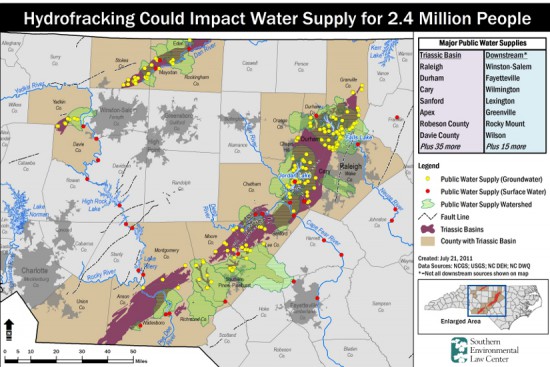 The passage of the Energy Modernization Act, viewed as the beginning of the end to the General Assembly’s quest to see drilling begin in North Carolina, is both evidence and a direct result of that process. And a host of provisions that did make it into the final bill seem built to incent natural gas companies to operate in North Carolina.

One provision in the original Senate version would have made it a felony to disclose potentially harmful chemicals used in the drilling process. The penalty was reduced to a misdemeanor in the final bill, but it could still come with jail time, and even in cases of emergency, first responders would have to enter a strict confidentially agreement with permit holders before sharing information about chemicals or health concerns.

The novel approach to protect a company’s frack fluid recipe isn’t all that novel. It’s similar to a section of Pennsylvania’s Act 13, a law passed in 2012. Dr. Alfonso Rodriguez, a Pennsylvania physician specializing in renal diseases, sued the state over its “medical gag order,” which he says abridges his freedom to communicate with his patients and colleagues about fracking chemicals and the health hazards they present to the public. That case went to the state Supreme Court last year.

Like Pennsylvania and other states, North Carolina’s new fracking law prohibits local ordinances that would restrict drilling because it is “the intent of the General Assembly to maintain a uniform system” for fracking statewide. But similar language was struck from Pennsylvania’s laws, and is being challenged in New York.

Less publicized sections of the bill are no less dubious. Our friends at the N.C. Conservation Network who’ve been tracking the issue closely have a helpful breakdown of the bill, which they say does not address the most significant risks fracking poses to our health, communities and the environment.

While most of the attention on fracking in North Carolina is currently on a handful of counties in the Piedmont, the mountains of western North Carolina are not off-limits to gas exploration and drilling in the future. The state plans to analyze rock samples from seven western counties to determine whether there is retrievable gas under North Carolina’s mountains.

The challenges associated with regulating fracking can be as prevalent as the threats that come with it. Across the country, state agencies that regulate oil and gas drilling are spread thin. With recent cuts to the N.C. Department of Environment and Natural Resources, it’s hard to believe North Carolina would be any different.

The proposed 2014 N.C. Senate budget includes $1.7 million to support oil and gas activities. Nearly a million dollars would be used for additional geological and geophysical analysis of the shale basins in the state and $100,000 of what’s left would be spent to market the state’s untapped shale gas resources. At least this time around, funding for additional agency staff is mostly directed to meet another desperate need: monitoring and better regulating coal ash ponds. But those funds are contingent on Gov. McCrory’s coal ash bill passing.

Poorly regulated, fracking poses intractable risks to water, air and human health – all of which have been demonstrated without a shadow of a doubt. It’s happening in Appalachian states including Tennessee, Virginia and West Virginia, with operations concentrated in rural, agricultural and coal-mining communities, where residents rely on private well water for drinking and irrigation. And it is creating strife in communities just as other destructive methods of resource extraction such as mountaintop removal coal mining have for decades.

Now, when they should be more concerned with improving rules to protect clean water and remedying coal ash pollution, state policymakers are luring gas companies to North Carolina and welcoming fracking with open arms.

Read more of our coverage of fracking in Appalachia from the Front Porch Blog and The Appalachian Voice.