An Era of Undoing: The State of Appalachia’s Labor Unions 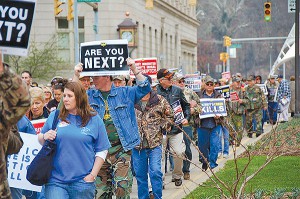 In the wake of Patriot Coal’s broken promises to union miners and retirees, The United Mine Workers of America have represented their members’ sense of injustice in cities and courtrooms across the region. Photo by Ann Smith, special to the UMW Journal

“We are union,” the marchers chanted. Blanketing the streets of downtown Charleston, W.Va., with bystanders shouting in support, the vocal crowd stretched for blocks behind a banner that read “Fighting for Fairness at Patriot.”

Shortly after Patriot Coal declared bankruptcy in July 2012, the company announced plans to rescind its promise of healthcare benefits to 1,800 union miners and retirees. Cecil Roberts, president of the United Mine Workers of America, quickly declared that the union would do “whatever it takes” to protect the benefits of active miners, retirees and the families of Patriot Coal employees.

Since then, in courtrooms and cities across the region, the UMWA has rallied to represent its members’ unified sense of injustice at the path taken by Patriot and its parent company, Peabody Energy.

Hard work, resilience and organized struggle are hallmarks of American history epitomized by the labor movement. But for decades membership in labor unions has been on a downward slope. Now, as they have in the past, economic challenges are forcing unions to reckon with the corporate strongholds they struggle to change.

A History of Hard-won Battles

When President Franklin Roosevelt ushered in the New Deal in 1933, pro-labor legislation came with it. Five years later, the president pushed Congress to pass the Fair Labor Standards Act, saying, “We are seeking, of course, only legislation to end starvation wages and intolerable hours.”

In addition to establishing a national minimum wage, the bill prohibited “oppressive child labor,” a practice associated with coal mining since the 18th century.

With these pro-labor laws, union membership around the nation grew — especially in manufacturing and mining hubs such as Detroit, Pittsburgh and Appalachia, where the United Auto Workers, the United Steelworkers of America and the UMWA wielded wide influence. Gone were the days in Appalachia of bloody mine wars and the mass evictions of miners and their families from company-owned housing for sympathizing with the union.

In the ‘40s, some of the labor movement’s most enigmatic figures emerged, including Philip Murray, the founder of the United Steelworkers of America, and John L. Lewis, a burly, brash former miner who came to personify the plight of the American coal miner as president of the UMWA.

In her book “Coal: A Human History,” Barbara Freese writes that Lewis “filled stadiums with cheering supporters wherever he went.” Under his leadership the UMWA became one of the nation’s strongest unions.

During World War II, however, Lewis’ popularity declined as he continued to compel miners to strike even in the midst of an all-hands-on-deck war effort. President Harry Truman’s disdain for Lewis was no secret; in a 1949 letter responding to a request that Lewis be appointed ambassador to Russia, the president wrote he “wouldn’t appoint John L. Lewis dogcatcher.”

Despite his contempt for Lewis and other labor leaders, Truman vetoed the Taft-Hartley Act, legislation which would have substantially limited the power of unions. Siding with organized labor, Truman said Taft-Hartley “abused the right, which millions of our citizens now enjoy, to join together and bargain with their employers for fair wages and fair working conditions.” The Senate, however, easily overrode Truman’s veto by a vote of 68-25 in June 1947.

In the journal, Democracy, Rich Yeselson recently wrote that Taft-Hartley forced unions “to weigh the economic and political costs of doing anything too aggressive in their efforts to grow,” and required them to begin fighting to protect the gains they had already made.

Coal as a Case Study

Throughout the 20th century, perhaps nowhere have the political struggles and uprisings of the labor movement been more evident than in Central Appalachian coal-mining communities. From the mine wars to violent labor drama in Logan and Mingo counties in West Virginia, several decades of discord have led to alliances between prominent politicians and the UMWA.

If pro-labor politicians standing up for mine safety are revered, it is the tactics of mine managers and coal companies that unions most revile. Former Massey Energy CEO Don Blankenship was infamous for his anti-union views, referring to strikes as “union terrorism.”

Long after the days of union-busting brigades and hired thugs, more recent labor battles have been fought with wages and benefits rather than weapons. In the late ‘80s, Pittston Coal Company terminated contracts with the union in an effort to protect profits after coal prices declined. Today, Peabody Energy is accused by the UMWA of willingly packaging up and shedding its union mines by creating Patriot Coal, a company the union claims was made to fail — a message that is resonating widely now that Patriot is in bankruptcy.

Cecil Roberts, president of the UMWA and the heir to John L. Lewis’ rallying rhetoric, has called Patriot a “house of cards” created by Peabody to “get out of its obligation to pay for the pensions and health care of thousands of people.” Over the past year, Roberts, union members and supporters have sat with clasped arms in the streets of St. Louis, Mo., where Peabody is located, Charleston, W.Va., and other cities until being led away in handcuffs.

In mid-August, after a year of protests and pronouncements, the UMWA ratified a new contract with Patriot Coal that undoes most of the wage cuts and health benefit reductions planned by Patriot. While the new contract is a step forward, Roberts says it does not guarantee lifetime health benefits for retirees, an obligation he contends is owed by Peabody Energy.

On Sept. 27, a federal judge threw out a class action lawsuit filed by the UMWA to require Peabody to pay for Patriot retiree benefits. The same day, Roberts announced the union will appeal that decision. 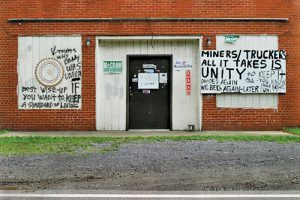 The shuttered union hall is a symbol of the decline of unions in Appalachian coal-mining communities. At the turn of the 21st century, membership in the United Mine Workers of America had declined to nearly half what it was in 1950. Photo by Earl Dotter (earldotter.com)

Falling from nearly 30 percent in 1950, today less than seven percent of private sector employees are members of unions, a level not seen since the early 20th century. After an era of undoing, the largest federation of unions in the country is taking steps to ensure the years ahead will see a renaissance in the ways unions organize and operate.

In September, the atmosphere at the American Federation of Labor and Congress of Industrial Organizations’ annual convention in Los Angeles reflected that approach.

By the end of the convention, delegates had started down a progressive path in a movement that, after more than a century, continues to evolve.Among other outcomes, the AFL-CIO committed to creating a road map for immigrants and aspiring Americans, and passed a resolution calling for improvement in international trade.

Perhaps most significantly, the federation announced plans to develop an organizing strategy for the southern U.S. states, where they say corporations’ efforts to divide the white working class and minorities have broken communities and negatively influenced U.S. labor and social policies.

The announcement has led some onlookers to recall Operation Dixie, a campaign in the mid-20th century that fell far short of its ambitions to organize the racially segregated South. Others contend that it will be difficult to organize in states with right-to-work laws — a statute of the Taft-Hartley Act allowing states to prohibit “union shop” agreements that require an employee to join the union associated with their trade. Currently, right-to-work laws exist in every state in the Southeast.

Finding ways around right-to-work statutes will likely require new approaches, but there are examples for organizers to follow.

In North Carolina, Working America, a non-union partner organization of the AFL-CIO, organized 25,000 workers over the last year to promote an agenda including tax reform and retirement security. The North Carolina AFL-CIO believes that amount of interest, even from non-union employees, could be a boon for labor’s interests in the state.

In Chattanooga, Tenn., Volkswagen is working with the United Automobile Workers to create a German-style works council, bringing factory floor workers and management together on issues such as workplace safety and sustainable business practices.

But as organized labor looks ahead, the cloud of uncertainty over even the most established unions is unavoidable. Accordingly, marchers at UMWA rallies hold signs high with a question that could be posed to members of all labor unions, private and public, nationwide: “Are You Next?”