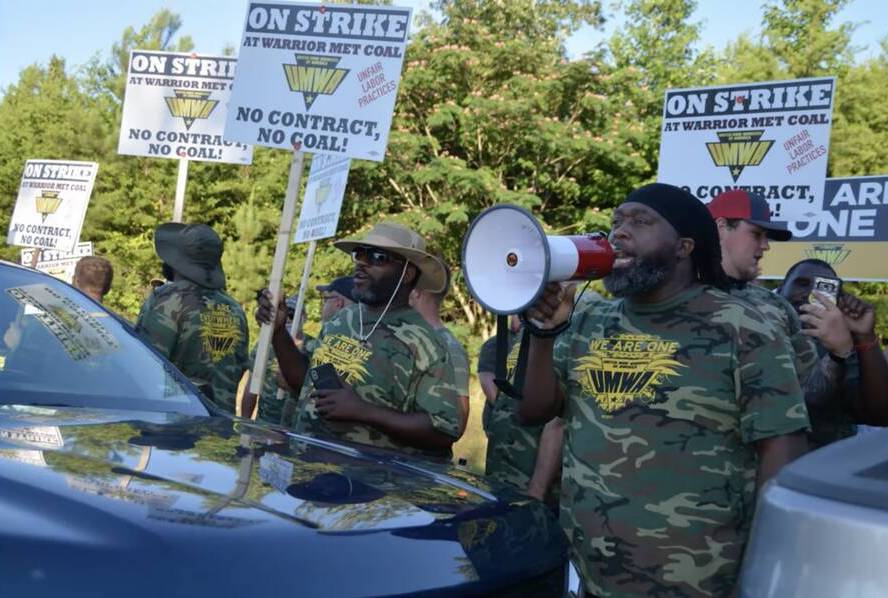 United Mine Workers and allies hold the line against Warrior Met Coal in Brookwood, Ala., on June 15. Courtesy of UMWA communications

By Jacob Morrison, In These Times

BROOKWOOD, ALA. — ​“You ain’t working tonight!”

That was one of the picket line chants heard June 15 as several hundred members of the United Mine Workers of America (UMWA) and their allies attempted to block strikebreakers from entering the Warrior Met Coal mine.

With tank tops that read ​“scab bullies,” supporters stood shoulder to shoulder with the miners while police pleaded for protesters to move their trucks. No one would claim the vehicles.

“Who is in charge?” one of the officers asked.

“Everyone,” answered Haeden Wright, president of a local UMWA women’s auxiliary unit, a close-knit group of union members’ wives and supporters. ​“We are the UMWA.”

Police eventually towed the vehicles, but the standoff would last for hours. One miner offered a simple explanation: ​“This playing nice shit ain’t cutting it.”

The picket line had grown contentious before. In May, about two months after the strike began, Tuscaloosa police arrested 11 leaders of the UMWA and the Alabama AFL-CIO for blocking one of the mine’s 12 entrances. They all spent the night in jail and, according to the union, were given a warning: If they’re arrested again, they will be held until trial.

Along with threats from police, striking miners have faced other attacks — including three separate vehicular assaults in June, in which drivers plowed into UMWA picketers.

“Warrior Met personnel, either management or nonunion workers, have repeatedly struck our members, who were engaging in legal picket line activities, with their vehicles,” UMWA International President Cecil E. Roberts said in a June 7 statement. ​“We have members in casts, we have members in the hospital, we have members who are concerned about their families and potential of violence against them if they come to the picket line.”

The work stoppage, which follows the months-long campaign to unionize Amazon warehouse workers in nearby Bessemer, is one of the country’s most significant mining strikes in decades. On April 1, upward of 1,100 workers walked off the job as their contract with Warrior Met expired. The union reached a tentative agreement with management a week later, but rank-and-file members rejected it, claiming it failed to address demands for better hours and wages. The miners remained on strike.

When the UMWA signed its most recent contract in 2016, it agreed to significant concessions to save the jobs of workers laid off by the mine’s previous owners, Jim Walter Resources, with the understanding that new management would eventually reward workers for their sacrifice. Those concessions included an average wage cut of $6 (from $28 to $22), mandatory seven-day workweeks, loss of overtime pay and, perhaps most crucially, an end to full healthcare coverage.

“Our members are the reason Warrior Met even exists today,” Roberts said in a March 31 statement. ​“They made the sacrifices to bring this company out of the bankruptcy.”

While cheaper and greener alternatives threaten the coal industry, companies like Warrior Met, whose coal is used in the production of steel, enjoy a measure of security. Warrior Met reported a net loss of $21.4 million in the first quarter of 2021, but CEO Walter J. Scheller, III says the company is ​“strongly capitalized and well-positioned to restart our growth trajectory” after the pandemic and is negotiating in good faith.

Meanwhile, strikers are struggling. The UMWA has provided members with weekly payments of $350, but that’s a fraction of their lost salaries. Roberts estimates the strike costs the union more than $1 million per week. To supplement these payments, the UMWA created a strike fund that has directed hundreds of thousands of dollars in donations from other unions and groups directly to the miners. (Full disclosure: the North Alabama Area Labor Council, of which the author is secretary-treasurer, has contributed to the fund.)

The women’s auxiliary pantry has collected tens of thousands of dollars more. Local markets have also allowed the unit to purchase bulk groceries at wholesale for miners and their families.

“Miners have always been their brother’s keeper,” says Braxton Wright, a long-time UMWA member and Haeden’s husband. ​“They’ve always stuck together as a group, even outside of work.”

Haeden sees the strike as part of a bigger struggle. ​“We know about Blair Mountain, we know about Mother Jones, we know Harlan, and we know what it takes to move a company,” she says. ​“That’s hard for people to understand if they have never been a part of [this].”

Fourteen miners clad in camo-print UMWA T‑shirts took the fight to Wall Street on June 22 to protest three hedge funds with substantial stakes in Warrior Met — BlackRock Fund Advisors, State Street Global Advisors and Renaissance Technologies — that the union blames for stalled talks. Among others, labor leader Sara Nelson, president of the Association of Flight Attendants-CWA, marched alongside them.

Their battle cry remained the same: ​“No contract, no coal!”

This article is reprinted from In These Times magazine, © 2021, and is available at inthe​se​times​.com.