The Spirit of Foxfire is Alive in Appalachia

In 1966, a high school teacher in Rabun County, Ga., tried a new teaching approach in order to win the attention of his disobedient, disinterested students. He assigned his English class the task of interviewing Appalachian homesteaders about the essential skills, passed down from generation to generation, that enabled them to survive without money, modern plumbing or electricity. 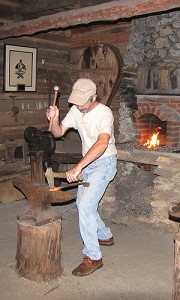 Barry Stiles, curator of the Foxfire Museum, demonstrates blacksmithing skills in a traditional cabin maintained by the Foxfire Fund.

These interviews were recorded, compiled and published as the first Foxfire magazine, named after the bioluminescent glow from a certain fungus in the area forest. The magazine eventually expanded into a series of books that drew national fanfare due to their candid portraits of these innovative Appalachians. More than 45 years later, students at Rabun County High School continue to publish Foxfire.

Today, the Foxfire Museum at Black Rock Mountain, Ga., sits on a site that students and teachers purchased in 1974 with royalties from the magazines and books. It serves as a place of pilgrimage for fans of Foxfire, who come from all over the world for group tours and to see demonstrations of traditional art forms.

The curator of the museum, Barry Stiles, emphasizes that throughout its history, the organization has pursued the same goal of preserving the culture of Appalachia. Stiles credits the success of the books to their value as primary sources, citing the “authenticity of the people who were interviewed” as giving the books universal value and appeal. The books passed down the knowledge directly from homesteaders, “not people who were interpreting it.”

Book sales and visits to the museum have increased dramatically in the last few years, an occurrence that Stiles believes is due to the recent economic turmoil. “People have comfort in knowing how to do something … some of it’s nostalgia, some of it’s people learning how to be self-reliant.”

At the Wild Abundance Living Skills School in Barnardsville, N.C., which teaches homesteading skills much like those in Foxfire, many students echoed Stiles’ claim about the resurgence in popularity and it’s connection to the economy. One student, Jacquelyn Dobrinska, noted that the living skills classes help her learn the original stories behind the essentials she buys, and engender “an appreciation for the time, the ingredients [and] the work,” put into those products.

For Stiles, the difference between past and present is that people don’t necessarily have to develop skills to live off the land in order to survive. He says that recently, the dwindling population of Appalachian homesteaders who reside “off the grid” has challenged Foxfire students on the hunt for stories. “That type of person has nearly vanished,” Stiles says. 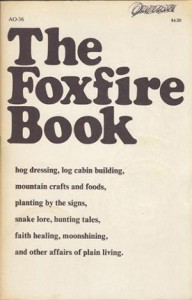 Many modern homesteaders, however, might disagree with Stiles’ claim. The frontier spirit that Foxfire tries to preserve is alive and well in people like Natalie Bogwalker, director at Wild Abundance. After years of experience organizing classes and events with other sustainable skills teachers and traditionalists, Bogwalker claims that the “number of people who were practicing [self-sufficiency skills] in the past is equal” to that of today. Bogwalker runs programs on her land that teach basic life skills such as log cabin construction, wilderness survival skills like recognizing edible plants, and primitive arts such as clay pottery.

Corinne Lee, an apprentice at the living skills school, prefers to call the techniques that Bogwalker teaches “heritage skills,” explaining that the term “primitive” has too much of an antiquated meaning. Both Bogwalker and Lee are dedicated to bridging the modern, technological world with the wild, natural world to make sustainability accessible to a wider community.

That mentality seems to be growing among the classrooms at Isaac Dickson Elementary School, an Asheville City School in North Carolina. Its curriculum is inspired by the values of the Foxfire Teaching Method, using a list of core principles to empower students with increased choice and involvement in the local community.

Principal Brad Johnson credits the success of the school to the experience-based learning and instruction drawn from the Foxfire method. During one project on the cycle of economy, students planted a garden, harvested seeds, designed seed containers, and sold seeds at the farmer’s market. According to Johnson, the value of an Isaac Dickson education is “not just reading or writing about it, but doing it, seeing it, feeling it.”

The school, which currently has a waiting list, serves as an example for other Asheville City Schools. “Eight years ago we were the only school with gardens,” Johnson says. “Now all the schools have gardens.”

The spirit of Foxfire lives on across Appalachia. Camps such as the National Youth Leadership Program for boy scouts in Hiwassee, Va. and classrooms like those of Appalachian Feet in Greenville, S.C. practice Foxfire’s ideals by passing on self-sustaining and traditional skills. Foxfire inspires and teaches, perpetuating Appalachian practices from generation to generation.