What happens to a community historically centered around coal mining when the coal runs out?

The story of fossil fuels is a story of booms and busts, and reports indicate that Central Appalachia is on the brink of the greatest bust yet. Central Appalachian coal is running out — the U.S. Energy Information Administration anticipates a steep decrease in production — and the seams that remain are thin and difficult to mine.

But as coal-impacted communities fight for a cleaner future and work toward a proactive economic transition, we’re not limited to knowledge of the here and now. Across the Atlantic Ocean, among mountains that are geological kin to the green ridgelines of Appalachia, communities in Wales have also dealt with fallout from the globalization of coal markets, decreased coal reserves and environmental degradation. 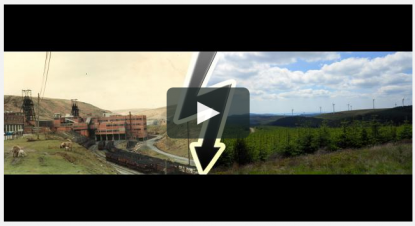 An attentive audience packed into a room at Appalachian State University in Boone, N.C., yesterday afternoon to discuss what happens in coal-impacted communities when the coal is gone. The event, hosted by the Center for Appalachian Studies, brought together the Center’s director, Dr. Patricia Beaver, documentary filmmaker Tom Hansell, and celebrated regional sociologist Helen Lewis.

The After Coal project has its roots in a fellowship Helen Lewis received in 1974 to research and film communities in Welsh coal-bearing valleys, and the Center for Appalachian Studies now facilitates ongoing exchanges.

Some film clips emphasized the positive traits Wales and Appalachia shared — strong cultural identities characterized by song and community co-dependence. Other clips portrayed the devastation wrought by industry. In 1966, an earthen impoundment holding back coal waste collapsed in Aberfan, Wales, unleashing a torrent of coal waste that all but buried a Welsh school. 144 died. And in 1972, an all-too-similar dam failure sent a flood of toxic waste down Buffalo Creek in Logan County, W.Va., killing 127. (Read more about the Buffalo Creek disaster here).

Perhaps the most striking difference between coal mines in Appalachia and Wales is that of ownership. Where coal production in Appalachia has been defined by private mines and the coal industry’s monopolization of land ownership, mines in Wales were nationalized. Until the 1980s, Lewis says, the nationalized mine system aimed to provide coal for the United Kingdom while creating a stable workforce by balancing production among mines. Profit was a goal, but not the only goal.

Meanwhile, Appalachian mining families often lived in homes owned by the coal company, and were frequently dependent on the company store. When a company moved out, it often destroyed the town in its wake, evicting residents and demolishing homes (a practice that continues today). In Wales, families owned their own land and built stone houses.

With differences in everything from mine ownership to labor practices and regulation to the role of women, can the experiences of coal-impacted communities in Wales answer all the pressing problems facing Appalachia’s economic transition? Simply put, no. There’s no easy path to follow — Welsh villages still struggle to retain good-paying jobs and develop the entrepreneurship necessary to offset the lack of infrastructure and investment in the area.

Yet the ongoing After Coal project championed by Hansell, Beaver, and Lewis is promising. The D.O.V.E. workshop, a women-led education and training center in economically depressed Dulais Valley, is one inspiration. And in Afan Valley, Wales, strict mine reclamation regulations have encouraged a growing recreation industry. Strict regulations like those are literally an ocean apart from the anti-regulation fervor in parts of America today, but we would do well to pay attention to how that community responds to wind developers’ interest in the valley.

Appalachia’s current struggles for clean water, healthy communities and stable local economies are urgent and demand urgent solutions. The After Coal project brings lessons from similar times and places into the conversation about local communities when the coal is gone.