A One-Two Punch in the Fight for Clean Water

It has been a week of good news in the fight for stronger protections against coal ash pollution. A court settlement in South Carolina and a major decision regarding the 2008 TVA Kingston coal ash spill make for a one-two punch against the poorly regulated toxic waste. 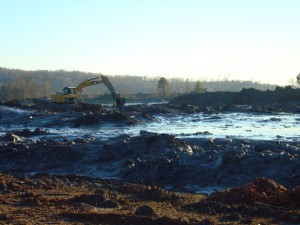 A federal court found that the Tennessee Valley Authority is ultimately liable for the December 2008 coal ash spill. The failed pond at TVA's Kingston Plant released more than one billion gallons of toxic coal ash and covered 300 acres.

This morning, a federal court ruled that the Tennessee Valley Authority is liable for the massive coal ash spill at its Kingston Plant in December 2008. In his written opinion, U.S. District Judge Thomas Varlan ruled that the spill resulted ultimately from TVA’s “negligent nondiscretionary conduct” — far from the unpredictable geologic event that TVA lawyers claimed was the cause during the trial.

In fact, we know more than ever just how preventable the catastrophic spill was. In the months following the event, an engineering firm hired by TVA issued a report that identified the unstable layer of soil beneath the coal ash which had gone undetected for decades as TVA continued to pile on larger amounts of the toxic waste. Subsequent reports revealed internal agency memos that contained warnings that could have prevented the spill. And in his ruling, Varlan was sure to mention that had TVA investigated and addressed the unstable pond, the spill might have been avoided.

Shorty after the coal ash pond failed, it became clear that the Kingston spill would become the worst environmental disaster of its kind in American history. TVA initially estimated that 1.7 million cubic yards burst from the pond and into the Emory and Clinch Rivers. They later had to revise that estimate to more than 5.4 million cubic yards — more than a billion gallons and 100 times larger than the 1989 Exxon Valdez oil spill. 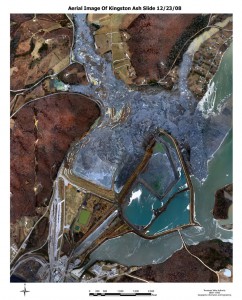 Four years may seem like a long time, but cleanup efforts continue and for the hundreds of residents of eastern Tennessee who sued TVA for the damage to health and property caused by the spill, today’s decision has been a long time coming.

Another encouraging move away from coal ash came earlier this week in South Carolina when South Carolina Electric & Gas settled a lawsuit filed by the Catawba Riverkeeper over the storage of toxic coal ash at its plant in Eastover, S.C. along the Wateree River. The Wateree Plant has been cited for several violations of state groundwater standards by the S.C. Department of Health and Environmental Control.

The settlement requires SCE&G to remove the coal ash from the unlined ponds and recycle it or move it into lined landfills away from the river. It will also expedite the scheduled closure of the plant’s coal ash ponds.

While these decisions are great and should be celebrated, they address the symptoms of the underregulation of coal ash, rather than the problem itself. An industry operating on the idea that coal ash is a benign resource that poses little to no threat to groundwater and public health has little incentive to invest time and resources into preventing spills and leaks from storage ponds. 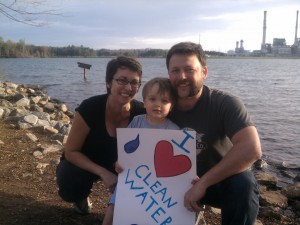 More than 9,000 people have signed Appalachian Voices' Red, White and Water pledge and joined to movement to protect clean water.

In 2010, the U.S. Environmental Protection Agency proposed two options that would increase oversight of coal ash disposal. One would classify coal ash as a hazardous waste, enabling federal regulation of the substance, the other would set broad standards but would largely leave enforcement up to the states. But both caused fierce backlash from electric utilities and other industries which benefit from lenient regulation of coal ash.

As long as utilities are able to continue business as usual, storing billions of gallons of coal ash waste in unlined and underregulated ponds, spills are likely to occur. Through its Red, White & Water program, Appalachian Voices, along with other regional and national groups are reviving the movement that led to the passage of the Clean Water Act 40 years ago and pushing for stronger protections governing the disposal of coal ash.

The EPA and TVA are currently accepting comments on Phase 3 of the Kingston coal ash spill clean up. Comments can be sent to kingstoncomm@tva.com. The full Engineering Evaluation/Cost Analysis can be found here.