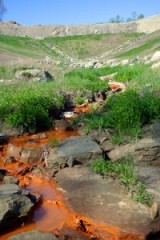 Appalachian Voices submitted official comments following the EPA’s public hearing on June 2nd and 4th. Our comments affirm the EPA’s objections to 36 water pollutant discharge permits for surface mines in Kentucky. The 36 draft permits were issued by the Kentucky Energy and Environment Cabinet.

Under the Clean Water Act, the EPA must ensure state compliance with clean water laws to protect public health and the environment. Our official comments explain why we agree with the EPA’s decision, and address misinformation and additional problems with the permits.

Our examination of the discharge monitoring reports from the three largest surface mining companies, Frasure Creek, ICG, and Nally & Hamilton, revealed systemic problems in water pollution monitoring and control in Kentucky. Through our subsequent lawsuits, it became evident that the Kentucky Energy and Environment Cabinet has done little to enforce the Clean Water Act as it pertains to coal mining in the state by not identifying or addressing violations, and was likely not even reviewing DMRs.

From 2007 to the present, 21 peer-reviewed scientific studies confirm that water pollution from coal mines is prevalent, has serious consequences for the surrounding ecosystem, and is likely linked to a wide range of human health consequences.

Connecting these permits to misinformation regarding employment and the economy

The recent shift in the energy market toward the use of natural gas and other energy sources has resulted in a decreased demand for coal. In an effort to remain profitable, it is likely that many coal mining companies in Kentucky will attempt to reduce operating costs at the expense of the environment and local people. The EPA has all but confirmed these trends in its review of and objection to the 36 permits now in question.

Addressing additional inadequacies within the permits

Further inadequacies include:
• It is inappropriate to develop permit limits after the permit has been issued as this allows water to be discharged that could cause violations of water quality standards during the period before limits are developed. It also provides no assurance to the public that the agency will ever develop additional permit limits to protect water quality.
• It is inappropriate to develop permit limits before or after the permit is issued based on monitoring data submitted by the coal companies themselves, without further measures to ensure the data is accurate.
• Where permit limits were developed, in many cases they are inadequate to meet water quality standards. In many cases the fact sheets state that a reasonable potential analysis was done, but the results and work are not provided, calling into question the validity of the analysis.

For these reasons, Appalachian Voices asks that the EPA reaffirm the objections to these permits.

You can read the official comments here for more details.