Artists for Appalachia was a huge success! 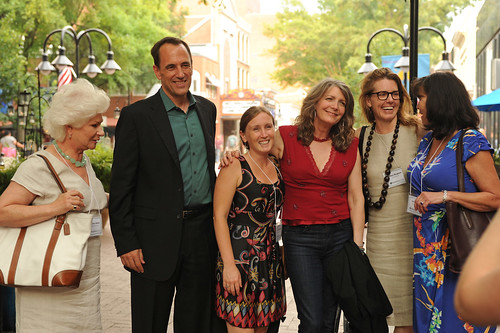 Everyone loves attending a well organized celebration. I do too, but even more, I love to plan them. I have regularly volunteered to organize parties for friends, family, and even strangers because I just flat out love a good party. Though I’ve been at Appalachian Voices for a relatively short time, I have admired our organization’s work for many years. I was beyond pleased when I found out that I would be in charge of organizing Appalachian Voices’ 15 year anniversary celebration and benefit concert here in my town of Charlottesville, Virginia. What better way is there to celebrate 15 years of protecting the beautiful and unique Appalachian region but to bring people together with Appalachian inspired music and revelry? With that in mind I started planning Artists for Appalachia at the beginning of the year.

I aimed to get local, regional and nationally-known artists under the same roof for one inspirational night, and bring out a crowd of members and supporters to enjoy the show, all while raising funds to help us continue our work. It was by far the largest celebration I’ve ever planned. But, the truth of it is, it was shockingly easy to plan this event.

The artists that joined us last Thursday on the downtown mall in Charlottesville, Virginia, eagerly wanted to celebrate our work. Not only were they willing to be there, donating their talent and time, but they were excited to be there. Each artist had a personal connection with the region and with its culture, and it shined through as they took the stage.

Perhaps the most important guests at Artists for Appalachia were the hundreds of members who joined us in our 15th anniversary celebration. Guests came from as far away as Ohio, South Carolina, central Tennessee and everywhere in between to take their seats at The Jefferson Theater in Charlottesville, Virginia. Kentuckian Michael Johnathon, of Woodsong’s Old Time Radio Hour, welcomed the crowd as our M.C. and even played us a few of his own tunes throughout the evening with guest violinist Jessica Tzou.

Johnathon first welcomed Charlottesville folk music favorites, The Honey Dewdrops, who have been touring the country talking about our work to end mountaintop removal coal mining and even wrote a poignant song, “Hills of My Home,” to help tell the story. The metrobilly band ⅔ Goat took the stage next. Though they live in NYC now, their lead singer, Annalyse McCoy, hails from central Kentucky where her family has been directly affected by mountaintop removal coal mining, and 2/3 Goat has also advocated against mountaintop removal while on tour. They got the crowd clappin’ and stompin’ when they sang their lively song “Stream of Conscious.”

Later in the evening Clara Bingham, director of the award-winning documentary The Last Mountain, talked about her experience filming in Appalachia and then showed a gripping clip of the impassioned film. Singer and songwriter Daniel Martin Moore silenced the crowd with his song, Fly Rock Blues. He sang somberly about the dangers of rocks flying as the coal industry blasts the mountains away.

Keynote speaker Jeff Goodell, a contributing editor of Rolling Stone magazine and the author of Big Coal and, most recently, How to Cool the Planet, shared his own unlikely journey of becoming a standard-bearer for environmental health, a journey that began when he was a Silicon Valley journalist. He portrayed the challenges each of us face in trying to live responsibly in our energy-addicted society, and his speech underscored the importance of individuals taking a stand to build a more sustainable future.

Goodell was followed by another Charlottesville favorite, Trent Wagler, who finished out his set by singing John Prine’s “Paradise.” The powerful imagery contained within those lyrics brought some folks in the crowd to tears. And when everyone dried their eyes, Grammy award-winning singer Kathy Mattea took the stage to share her love of the Appalachian mountains with the crowd, performing songs about coal’s dark history in the region. June 21 happens to be her birthday, so at the end of her set we surprised her with her own birthday cake! 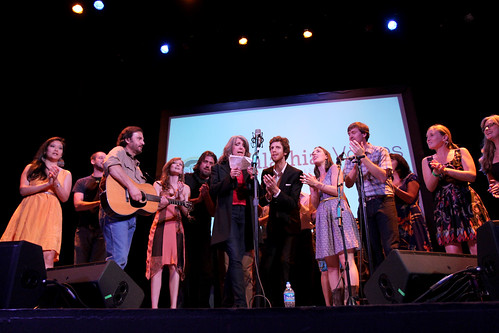 The artists closed the night out by all getting on stage singing a very appropriate Jean Ritchie song, “Jubliee.” Just like she wrote in the song, “swing and turn/ Jubilee/ Live and learn/ Jubilee,” we must celebrate Appalachia and we must continue to learn how to protect it better and I promise, with your help, Appalachian Voices will continue to do so for another 15 years.

Artists for Appalachia would not have been possible without the generous support of:

Kayti, a native of Virginia's Shenandoah Valley, worked as the coordinator for the Wise Energy for Virginia Coalition before serving on becoming a key member of Appalachian Voices' development team from 2011 to 2016. She is currently advancing her marketing knowledge at the University of Virginia.