Speaking Out At EPA Hearings in Kentucky

Upon our arrival, we definitely stood out. I wondered if we exuded “tree hugger,” but it’s more likely that the “I Love Mountains” buttons gave us away. While no one approached us directly to ask what we were doing there or to start an argument, the rally cries and fire-and-brimstone speeches in the background gave me pause. On the other hand, my fellow AppVoicers seemed comfortable, even delighted, to approach people participating in the coal rally and engage in dialogue.

The June 4th U.S. Environmental Protection Agency hearings were held at the Eastern Kentucky Expo in Pikeville, a massive stadium that seats 7,000. Individuals gathered to voice their opinions on the EPA’s denial of 36 mine permits because of water quality issues. Following the hearing, the EPA will be receiving comments until June 21st.

While things seemed relatively calm during the rally outside, within the Expo things turned nasty. None of the jeering was too off-putting, but the feeling of tension and the combative tone pro-coal individuals took with EPA officials and environmentalists made everyone in our small group uneasy. 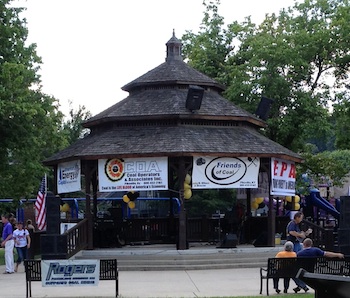 Four members of Appalachian Voices spoke at the hearing, Eric Chance, Erin Savage, Matt Wasson, and myself. We talked about Kentucky’s troubled history of failing to enforce clean water protections, and agreed with the EPA that the permits in question lacked appropriate scientific data and safeguards to protect watersheds. We also commented on the devastating health impacts from water pollution caused by mountaintop removal coal mining, and countered coal industry propaganda with data about the recent rise in the region’s coal employment. A member of the Sierra Club, Alex DeShay, also spoke, and we all received very vocal disapproval from the crowd. I wondered if we were in a precarious situation by being the only people who were openly supportive of the EPA’s initiatives.

This is not the Eastern Kentucky I know.

Eastern Kentucky has been my home since I was three years old, and it was strange to see such a polarized community, to hear the angry comments, and to hear the fear. In truth, we’re all fearful of the changes occurring. In conversations with friends from home, it’s evident that we all understand that this is a complex issue and that we are operating within structures, like market forces and the declining amount of Appalachian coal, that are beyond our control. The future is uncertain, but community members from home have always been open to discussing real solutions for Central Appalachia. Yet, at the EPA hearing my community members were turning into obstinate and aggressive adversaries.

I could see that some of this hyper-division between “us” and “them” had to do with the community identifying us as outsiders. I’m well aware of the tension between insiders and outsiders within Appalachia—and it’s not an irrational reaction. Appalachia became, and, in some ways remains, a spectacle for the rest of the nation during the War on Poverty. This distrust Appalachians have of outsiders is a consequence of decades of excruciating manipulation, stereotypes, misunderstanding, and abuse. In moments of conflict, the easy route is to distinguish between “us” and “them,” but this does not allow for real solutions to be created. This dividing of “us” and “them” happens in both pro-coal and environmental groups, and this perception of “sides” needs to end for any steps forward to occur.

In the time that I’ve been involved in the anti-mountaintop removal movement, I’ve been reminded that I’m in a weird grey area: I’m an insider and an outsider, all at the same time. And while I know that I’ve never known a home outside of the coalfields, one’s own understanding and construction of identity is never truly free of how others perceive your identity. 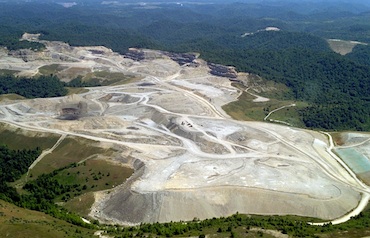 This Eastern Kentucky mountaintop removal mine is just one of many — over 500 Appalachian mountains have been similarly blasted in pursuit of dwindling coal reserves. Photo by Matt Wasson, Flight Courtesy South Wings.

I will always believe that I have as much claim to the land as a 7th or 9th generation Appalachian. I believe this fervently because I love the people of this region. They raised me and taught me compassion and integrity. They showed me the value of loving one’s neighbor, the danger of building physical and emotional walls, and to value relationships over valuables. They welcomed my family though we were strangers and showed me that while this nation is not post-race, being an American was deeper than one’s skin color and embedded in ideals and character. Going to college and spending time in far-away Philadelphia makes me value my home even more and helps me see its beauty in more than just mountains: it’s also in the people.

I am also here because all individuals’ liberation is bound up in this region’s liberation. The conflicts and struggles within the Appalachian region make it a microcosm of the issues playing out across the nation and the globe: corporate greed and irresponsibility over the common good, rising unemployment, partisan politics, and other social ills that result from corruption and misguided priorities.

But the coal industry has no ethical ties or obligations to uphold the wellbeing of communities, so I find it increasingly distressing to see community members rallying to protect an industry that has historically abused the region. The 36 denied permits are indicative of the complete disregard of these companies towards my community, my family, and myself.

Even more distressing is the fact that Kentucky’s Division Of Water accepted these permits. In each case, EPA found that the Division of Water had provided an incomplete analysis as to whether or not the proposed discharges had a reasonable potential to cause or contribute to a violation of Kentucky’s water quality standards. This analysis has made it clear that permits in Kentucky are inadequate, and, to add insult to injury, aren’t even being enforced by the state.

I do not hold one group, or one individual, responsible. The purpose of going to these hearings was to call upon our federal government to step in and do what is best for all the people of the region, something that the Kentucky state government cannot do due to internal power plays between corporations and local politicians. We have sacrificed too much and placed our trust in politicians who have consistently only thought of short-term gain—short-term gain that would result in their reelection.

1 Pings/Trackbacks for "Speaking Out At EPA Hearings in Kentucky"