To the Capitol and Back 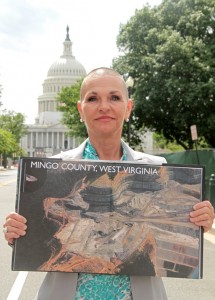 Donna Branham recently joined other Appalachian women in West Virginia in shaving her head in an act of mourning and protest against the destruction of the mountains. (Photo by Jamie Goodman)

One day, I hope I will see it up close so that I can begin to feel the magnitude of it. But after last week, I have seen so much more than stripped mountains. At The Alliance for Appalachia’s 7th annual End Mountaintop Removal Week In Washington, I met people whose lives have been altered, whose health has been damaged, whose homes have been destroyed – all because of mountaintop removal. Seeing the damage to these innocent people was perhaps more powerful than seeing the stripped remains of the mountains themselves.

One Appalachian resident said witnessing mountaintop removal is like seeing someone you love die.

The heartbreak and heartache caused by mountaintop removal came together in a powerful way last week – more than 130 people went to 125 lobby visits with congressmen and senators from states across the country. Four new co-sponsors signed on to the Clean Water Protection Act after the lobbying effort.

As a journalism student and a summer intern with Appalachian Voices, lobbying was completely new to me. I had never walked through the halls of the House office buildings, and I had certainly never stepped into a D.C. office of an elected representative. There is a different atmosphere in the nation’s capital, especially stepping into the vast stone buildings where our representatives work from day to day; I felt like a foreigner thrown into the suits and briefcases running through the hallways.

But walking through the building, I found solace in remembering that I am a constituent. I am a citizen, a resident. I am a voter. And each of these realizations reminded me that I was welcome. Representatives represent – I was justified in presenting my voice amid the chatter.

And to say the least, lobbying was empowering. Terrifying – especially when I unexpectedly braved one lobby visit on my own – but also exciting. Most of the representatives I visited were from areas not directly affected by mountaintop removal. Some were easier to convince than others, while some were hesitant to support something that doesn’t impact their constituents.

But ending mountaintop removal is not a one-man, or even a one-state, fight. The message of the week, spoken when all of us were gathered in the headquarters eating breakfast, was “you are not alone.” Accomplishing massive things is intimidating when one person carries it all, but when the goal is spread among hundreds, the impossible becomes more manageable. The consequences of mountaintop removal are not confined to state lines, and working for change shouldn’t be confined to these borders either.

After concluding the lobby visits, we held a rally at Upper Senate Park as part of our National Call-In Day. With the Capitol as a backdrop, several brave men and women shaved their heads in a display of mourning and protest of mountaintop removal coal mining. As thick locks of hair fell to the ground, others at the rally sang songs of hope. At the same time, four peaceful sit-ins were staged in the offices of four representatives by various groups from Kentucky, Virginia, West Virginia and Tennessee, the states in which mountaintop removal occurs. 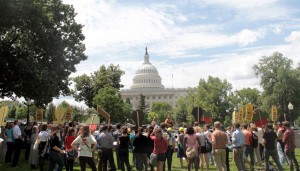 It’s easy to get caught up in the tragedy of mountaintop removal, but remaining hopeful is essential. We move forward because we believe things will change, because we have hope that things will get better. Behind the protest signs and banners are people who have hope, people who want a better world for their children and their children’s children, and people who want to preserve the world for future generations that they will never meet. 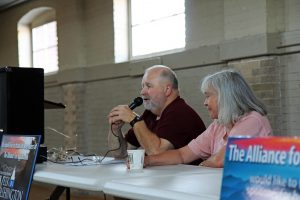 Stanley Sturgill, a resident of Kentucky, speaks about his experience with mountaintop removal during the Week In Washington training day. (Photo by Jessica Kennedy) 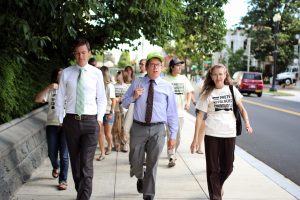 Week In Washington participants walk to one of the House office buildings. (Photo by Jessica Kennedy) 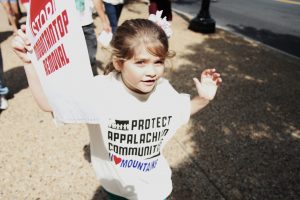 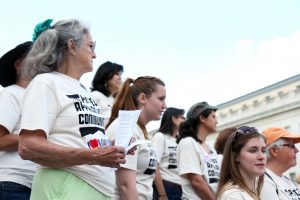 Week In Washington participants stand on the steps of a House office building to sing and chant before the rally. (Photo by Jessica Kennedy) 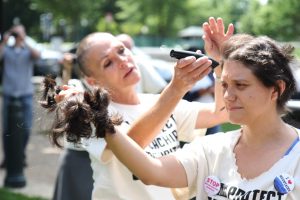 Sandra Diaz, the North Carolina Campaign Coordinator for Appalachian Voices, has her head shaved in Washington, D.C., at the rally to end mountaintop removal. (Photo by Jessica Kennedy) 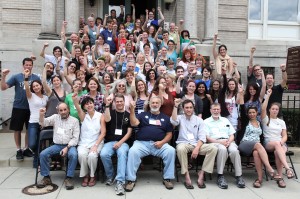