Last Saturday, June 2nd, FACES of Coal and Americans for Prosperity held the “Rally for Appalachian Coal Jobs” in Abingdon, VA. The flier for the rally touts the usual “War on Coal” rhetoric: “Appalachian Coal Jobs have been under regulatory assault from the bureaucrats in Washington D.C. It’s time we stand up and defend them!”

The event, held at the Washington County Fairgrounds, was open to the public and claimed to be “family friendly,” so we at Appalachian Voices thought we should attend.

The common claim from groups that support destructive mountaintop removal in Central Appalachia is that the Obama administration and the EPA are waging a “war on coal,” which is destroying jobs, the economy, national security, and probably baseball, backyard barbeques, and kittens as well. Phil Kerpen, who runs www.WarOnCoal.com, claims on Fox News: “Last week the U.S. Energy Information Administration reported a shocking drop in power sector coal consumption in the first quarter of 2012. Coal-fired power plants are now generating just 36 percent of U.S. electricity, versus 44.6 percent just one year ago. It’s the result of an unprecedented regulatory assault on coal that will leave us all much poorer.”

At least he got some numbers right.

It is true that last quarter coal provided only 36.2% of U.S. electricity; however, the coal industry is falsely blaming increased regulation. The real reason for this decline is competition from other energy sources, natural gas in particular. The Energy Information Administration (EIA) attributes the decline in coal consumption to a combination of extremely low natural gas prices and a mild winter. Coal is loosing a battle to free market forces, not to a fictitious regulatory war.

Claiming other fossil fuel sources and capitalism are the true enemies doesn’t work too well for the pro-coal politicians and the coal industry. Instead, they continue to insist that Obama and the EPA are waging a “war on coal.” However, this war is little more than political theater. 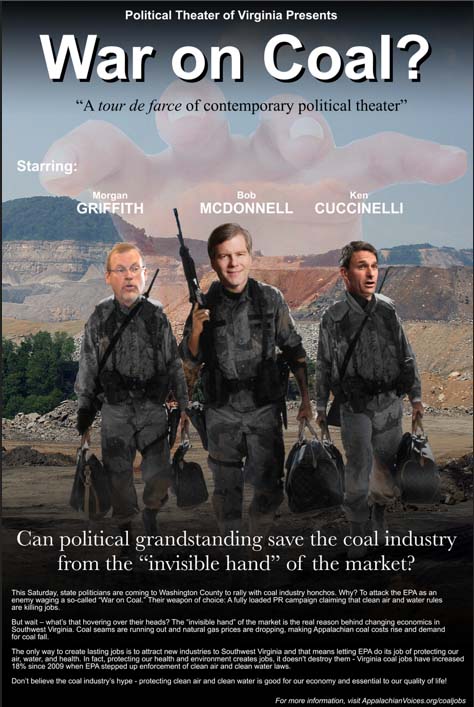 We attended Saturday’s rally armed with actual numbers behind the real situation in Virgina. The truth is, coal jobs in Virginia have increased 28% since the start of the recession, 18% since the Enhanced Coordination Procedures on Clean Water Act 404 permitting between the EPA and the Army Corps were announced, and 8% since the EPA released the conductivity guidance for Appalachian streams. In fact, there have been no new mountaintop removal permits issued since 2009 in Virginia, due to increased oversight of Clean Water Act permitting (because mountaintop removal coal mining cannot be done without polluting nearby public waters); nevertheless, coal jobs have increased in Virginia 18% in that time. This increase in employment is due to a shift toward more underground mining, which employees more people per ton of coal produced than mountaintop removal. A complete description of the current situation in Virginia can be found in this report.

Current job trends indicate that, in the short term, the Virginia coal economy will be able to weather the competition from natural gas. Less than half of Virginia’s coal is sold to U.S. power plants. The rest is metallurgical coal that is largely exported. In the long-term, coal in Central Appalachia is being depleted and coal demand is decreasing, meaning that the Central Appalachian coal fields need to diversify their economies in preparation for inevitable change. Virginia, at least, still has time to accomplish this without extensive job loss.

As expected, we were the only people sharing the above message at the rally.

We witnessed what basically constituted political theater, with little to no facts behind the statements. The speakers, who included Virginia Governor Bob McDonnell, Virginia State Senator Art Kirkendall, Virginia State Senator Phil Puckett, U.S. Senate candidate George Allen, U.S. Congressman Morgan Griffith (VA), U.S. Representative Phil Roe (TN), and Virginia Attorney General Ken Cuccinelli, all spouted the same message of an EPA “war on coal” with no fact or statistics behind their messages. One of the few numbers I heard all day was the claim that coal provides 50% of electricity for the U.S., which has not been true for quite some time and is now even further from the truth given recent energy reports.

While we didn’t see or hear a lot of facts, here is what we did find:
— Plenty of new names for the EPA, including the “Employment Prevention Agency” and the “Extending Poverty Agency”
— Stickers and buttons including, “If they take away our guns, how will we shoot the liberals?” and “Send Obama back to Kenya”

The speeches all incorporated several main themes: that the United States depends on coal (to a greater extent than it actually does), and that the “heroic” coal industry is fighting a war against the EPA. The last time I checked, one of the main goals of the EPA is to protect U.S. citizens from harm. I put together a short video of some of the best (worst?) of the rally, which is below, then found this clip on the FACES website — they may have illustrated my point just as well.

What was missing from the rally was any discussion of how, exactly, the economy of the Central Appalachian coalfields might improve. Several speakers suggested that employment in the coal industry would improve as long as the EPA ceased regulation, but they did not explain how demand for coal would increase despite increased competition from other cleaner and cheaper energy sources. Furthermore, there was no mention of the facts that many of the coalfields are among the poorest and least health communities in the entire country, and have been for decades.

We tried to remain as inconspicuous as possible, but found that our lack of pro-coal t-shirts effectively made us stand out quite a bit. Rather than staging any sort of counter demonstration, we approached politicians after they were finished speaking and attempted to have a one-on-one conversation. We expressed that we were specifically opposed to mountaintop removal, not coal jobs as a whole, and provided a flier depicting the current coal jobs trends in Virginia and a link to this webpage. Some politicians seemed less than eager to talk to us, but we were able to give our message to each individual we were able to track down in the crowd. We also attempted to speak with each of the reporters we could identify. One reporter in particular was happy to speak with us, commenting that he wondered whether “the other side” had a presence at the rally. We explained that we were only there trying to interject some truth into the conversation. His article can be found here.

Eventually, after passing out a flier to several attendees who noticed that we were approaching the politicians, several in the crowd became concerned about our presence. After the Virginia Governor spoke and we were unable to reach him, we decided we had already accomplished more than we had hoped and we quietly left.

What I found most disconcerting at this event was not a general difference of opinion between the speakers and myself, it was the fact that these politicians and corporate leaders are lying to the coalfield residents of Central Appalachia. They are using scare tactics to serve their political and economic agendas. Rather than helping communities lift themselves out of poverty and away from a dependence on coal, through education and economic diversification, they are convincing these communities that coal is the answer, that coal is the only answer. They are exploiting a population’s fears and misconceptions for their own benefit. Unfortunately, as Robert Byers points out, the media is often complicit in these lies.

Southwestern Virginia is going to have to do more than hold onto a misguided coal industry rhetoric that places blame on the EPA if it is going to come out ahead in a changing energy landscape. In the face of coal industry blame and scare tactics, the EPA must uphold its mandate to oversee enforcement of the Clean Water Act in Appalachia; doing so is absolutely necessary to protect the health and well-being of the people of Central Appalachia.