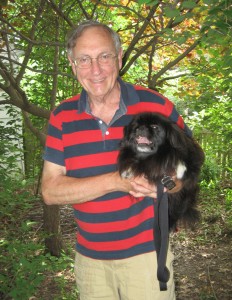 Nicholas Young, above, began traveling to Appalachia with his children, now grown.

Nicholas Young began visiting the Great Smoky Mountains with his kids more than 20 years ago.

When his kids were young, Nicholas would bring them from their Maryland home to summer camp at Tremont, located on the Tennessee side of the Smokies. “The trip down to Tennessee, through North Carolina, is always a treat,” he says. It was something they all looked forward to — Nicholas remembers fondly how they would jump from the car, eager to join their friends for another summer adventure. “They never looked back,” he says. “My loss, their gain.”

Nicholas first heard about Appalachian Voices after dropping off his kids during one such summer and finding The Appalachian Voice publication. “Your newspaper was in the gift shop and I liked what I saw,” he says. “I joined and have been involved ever since.” Nicholas has now been an Appalachian Voices member for 15 years.

Before discovering beauty and history in the Smokies, Nicholas would not have counted himself as an environmentalist, however. A self-described city kid, he never saw much of the mountains and didn’t do much hiking or camping growing up. Even as a student at the University of Chicago, environmental awareness was never much a part of his life. “I became a full human being after I left college and began to teach myself,” he says.

Now, he strongly believes in preserving the land from destruction. In addition to being a Mountain Protector monthly donor with Appalachian Voices, he supports many of the national environmental organizations as well as local parks, wilderness areas and organizations that promote clean water and land conservation.

Nicholas also is concerned with many environmental issues in his home state of Maryland, such as loss of oysters in the Chesapeake Bay. What inspires the greatest passion for him, however, are the mountains. “Anything inspires me that protects and preserves the mountains,” he says.

Nicholas finds beauty in the shapes of the Appalachian peaks and awe at their ancient origins; he wonders at the multitudes of creatures that have made their home where humans have also found shelter for tens of thousands of years. Here, too, he has found solitude and reverence. For him, the mountains are a sacred place, somewhere he can walk alone among the trees and experience “a feeling of being connected to Nature, to God.”

As he has walked through the forests and along trails such as the Wilderness Road, first blazed by Daniel Boone, through the Cumberland Gap, Nicholas has imagined himself following in the footsteps of those who came before him — natives and settlers, migrants and explorers. Having the opportunity to step into history alongside these early mountain dwellers has further deepened his love of place.

“Preserving the history along that route, and the mountains, is extremely important to me,” he says. Like those first settlers, Nicholas has stepped into a new life, one in which he, like so many others who have walked through these mountains, has found the inspiration to do what he can to protect the places he loves.