Enforcement of mine cleanup rules is needed to protect communities, create jobs 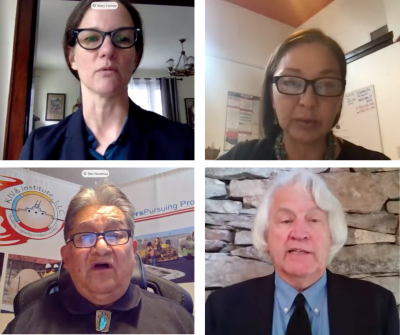 Among those who testified before the House Natural Resources Subcommittee on Energy and Mineral Resources on June 15 were Mary Cromer of Appalachian Citizens’ Law Center (top left), Nicole Horseherder of Tó Nizhóni Ání (top right), Ben Nuvamsa of the KIVA Institute and former chairman of the Hopi Tribe (lower left), and Joe Pizarchik, former director of OSMRE (lower right).

On June 15, the House Natural Resources Committee held a hearing on the mounting problem of coal companies neglecting their environmental cleanup responsibilities, an issue that is made more urgent by bankruptcies and other signs of financial insecurity across the industry.

Grassroots advocates from the Hopi Reservation, Navajo Nation, and Central Appalachia were among the witnesses who provided testimony, sharing their thoughts on what legislators and regulators should do to hold coal companies accountable for addressing the impacts of mining on land, water, and communities. In short, these witnesses called for the federal Office of Surface Mining Reclamation and Enforcement (OSMRE) to fully enforce reclamation standards, timelines, and bonding requirements (a type of financial assurance intended to cover reclamation costs if a company fails to clean up their mess), duties they say the agency has long been neglecting.

The hearing focused specifically on the issue of sluggish, inadequate, or totally non-existent reclamation on coal mines that are currently permitted. These unreclaimed or under-reclaimed mines are distinct from Abandoned Mine Lands, a term referring to mines that were abandoned prior to the 1977 passage of the Surface Mining Control and Reclamation Act (SMCRA), and which are now the responsibility of states to clean up. There are currently three complimentary proposals working their way through Congress to fund and expedite reclamation needs on these pre-77 Abandoned Mine Lands, but none of these measures will address the problems associated with unreclaimed current mines.

For current mines to achieve reclamation standards, it’s necessary for regulators to fully enforce existing laws, including requiring companies to forfeit their bonds so that those funds are available for the state to use for cleanup, explained Mary Cromer of Kentucky-based Appalachian Citizens’ Law Center, in her testimony to the House committee. “The industry will never have more money than it has right now to pay for reclamation,” said Cromer. “While coal mines still have operators with financial resources, and CEOs that are profiting, regulators must use their enforcement authority to speed up the pace of reclamation the way SMCRA intended.”

According to Cromer, market trends suggest a continuation of the coal bankruptcies that have become common in recent years. As a cautionary tale, Cromer detailed aspects of the ongoing bankruptcy of Blackjewel, noting that the company has already forfeited 33 of its permits in Kentucky. These mines are now the responsibility of the Kentucky Energy and Environment Cabinet, which estimated the cost of reclamation to be $28 million more than Blackjewel has made available through its existing bonds. Cromer added that many more permits are likely to be forfeited when the company’s liquidation concludes in September.

“As coal declines, coal mining regulations are failing to keep up, and coal companies are increasingly abandoning their environmental obligations,” said Cromer.

In 2017, coal company Blackjewel operated the Aily Branch Mine. After Blackjewel’s 2019 bankruptcy, three of the six permits displayed here transferred to Civil, LLC. The degree of mine reclamation has not changed significantly during that time. See the most up-to-date satellite imagery of this site here. Satellite imagery from Google Earth Engine, photos by Matt Hepler.

In her testimony, Nicole Horseherder of Tó Nizhóni Ání, a grassroots Diné (Navajo) organization, explained how Peabody Coal’s massive Black Mesa and Kayenta mines are now both shut down and sitting largely unreclaimed after decades of mining razed thousands of acres of Hopi and Diné land, and contaminated and depleted the Navajo aquifer, which the Hopi and Diné people have depended on for centuries. Horseherder explained how her own family now has to drive 30 to 40 miles to draw water from any of a handful of community wells, which are now the only available water sources — a drastic change from when she was a child and there were hundreds of springs throughout her community.

“[OSMRE has] allowed Peabody Coal to leave a mess at Black Mesa mine, and they’ve taken no action to move along reclamation work at Kayenta mine,” said Horseherder. “Peabody’s financial condition is one of the reasons we’re so concerned. The company came out of its first bankruptcy just four years ago and it barely avoided another earlier this year.” Horseherder added that the CEO who has overseen this mismanagement will soon be leaving Peabody, but will still receive $85,000 a month as a consultant for the company.

Tó Nizhóni Ání and allied organizations are calling on the OSMRE to determine that the sudden closure of the Kayenta mine in 2019 constitutes a “significant permit revision.” This move would trigger a multi-agency review of the mine’s reclamation plan, and afford opportunities for public engagement to Hopi and Diné communities who are eager to play a meaningful role in assessing and addressing impacts to the Navajo aquifer, among other scars of the mining operation.

On the whole, Democratic committee members inquired as to the impacts of unreclaimed mines on communities and workers, and for suggestions of what government bodies can do to address those impacts. For instance, Rep. Levin (D-CA) asked Mary Cromer for recommendations to protect workers’ interests in coal bankruptcy proceedings, while Rep. DeGette (D-CO) asked Nicole Horseherder whether government bodies are helping community members locate new employment in the wake of mine closures.

Republican members, on the other hand, tended to rail against mining regulations writ large as job-killing policies, seeming to miss the point that mine reclamation creates jobs, while allowing coal companies to shirk post-mining cleanup ultimately means laying off coal miners before they complete the jobs they were hired to do. Perhaps most bizarrely, Rep. Gosar (R – AZ), who was the keynote speaker at a white nationalist conference earlier this year, used the hearing to decry the 2009 demise of a proposed coal-fired power plant in New Mexico, after developers failed to secure state tax relief and $450 million in federal economic stimulus they said was necessary to fund the project, and after the proposal failed to meet various permitting requirements.

Despite the misplaced grievances of Gosar and some other committee members, the industry’s continued decline appears certain. This is primarily due to coal’s inability to compete with natural gas and renewable energy. Earlier this year, the International Renewable Energy Agency, an intergovernmental organization that supports renewable energy projects globally, released a report stating that in 2019, new renewable energy development was cheaper than even the cheapest new coal-burning facilities.

Towards this end, OSMRE and Congress must do more to protect people in coal-mining communities, and ensure that coal companies are meeting their reclamation requirements. Specifically, the OSMRE must issue a determination of a Significant Permit Revision on the Kayenta Mine, and aggressively advocate for the public interest in ongoing bankruptcies affecting Appalachia and elsewhere.

Along with regional and national partners, including some of the individuals who provided testimony before the House Natural Resources Committee, Appalachian Voices is working to develop legislation that would shore up funding for the reclamation of modern-era mines that are forfeited in the course of bankruptcies. This would create jobs in coal country, remediate environmental damage, and improve the health and safety of the communities where coal is mined.